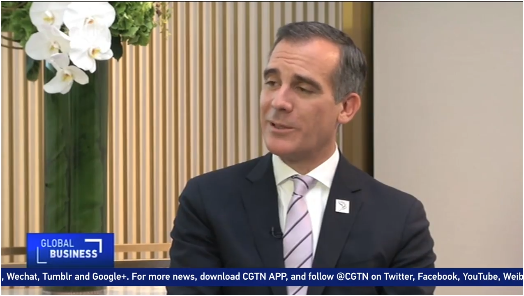 The ongoing trade tensions between China and the US seem to be having a negative impact on one of the biggest ports in America, Los Angeles. And the city's mayor Eric Garcetti says many Americans rely on China-US ties for their well-being and want to see fair trade.

Garcetti said that instead of a “self-declared victory,” what the US needs is a real economic outcome.

“How will we compete for the future?" he asked. "Global culture is our local culture and that’s what makes us so successful. But building walls and barriers make it very difficult to get the prosperity to the middle part of our country too.”

The mayor hoped the trade issues would be resolved, as LA’s economy relies heavily on trade, investment and tourism. Garcetti said that as the Port of Los Angeles is one of the largest in the US, as much as 20 percent of cargo container trade might be affected.

“We want fair trade,” Garcetti said. "If you don’t have a strategy for the outcome, you don’t have the framework to negotiate issues, this could incredibly distractive.”