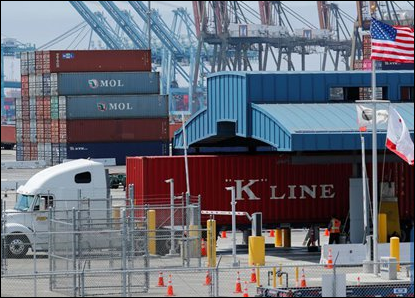 Trucks offload containers from ship at the port of Los Angeles in Los Angeles, California, US July 16, 2018. (Photo: Xinhua)

Port of Los Angeles, the largest single gateway for waterborne containerized cargo entering and leaving the United States, warned the proposed new tariffs on goods from China would create unintended negative impacts to the nation.

In a comments letter issued to the United States Trade Representative (USTR) on Monday, the port listed higher consumer prices, lower profitability for American firms, uncertainty in the maritime supply chain, and the potential shifting of trade routes to the detriment of the Port and the Los Angeles trade gateway as the most worrisome impacts of the tariffs against China.

This cargo generates over 310 billion US dollars annually, supports roughly 3 million jobs across the country, and reaches every one of 435 Congressional districts, the letter adder.

The San Pedro Bay Ports account for nearly half of all seaborne trade between the United States and China, noted the letter.

Based on these facts, the port predicated that both the imports and exports between the United States and China would plunge sharply if the proposed tariffs against China were imposed.

"On the import side, our most recent analysis estimates the current and proposed tariffs directed at China will impact roughly 66 percent of all imports by value and 64 percent by both tonnage and container volume at the San Pedro Bay. That's 130 billion US dollars worth of US imports from China exposed to higher costs," the letter read.

"On the export side, approximately 50 percent of US exports by value, 81 percent by tonnage, and 78 percent by container volume will be subjected to retaliatory tariffs by China," it added.

The port also disclosed that the current tariffs and uncertainty triggered by the White House's trade policy hadseriously affected its business.

"A year over year comparison of January through April 2018 and 2019 shows that exports to China dropped by 27.4 percent. While trade volumes with the rest of the world increased 15.1 percent during this period, these gains were eclipsed by the loss of exports to China, resulting in a minor 1.8 percent increase in container exports," the port said.

The proposed new tariffs are based on the so-called findings in the USTR's investigation of China under Section 301 of the Trade Act of 1974, a one-sided tool for Washington to serve its own interest in dealing trade disputes with other economies.

Twenty-five percent tariffs on some 200 billion dollars' worth in goods from China are currently in effect under the Section 301 trade action, and the White House threatened to impose additional tariffs of up to 25 percent on another 300 billion US dollars worth of goods from China.

The latest proposal has caused outcries of US companies and trade organizations, which voiced opposition against trade protectionism and detailed possible pain they might suffer if the tariffs were in place.