Britain’s opposition finance chief John McDonnell offered a new pact with the financial services industry on Thursday: higher taxes in return for a seat at the policymaking table if Labour wins the next election. 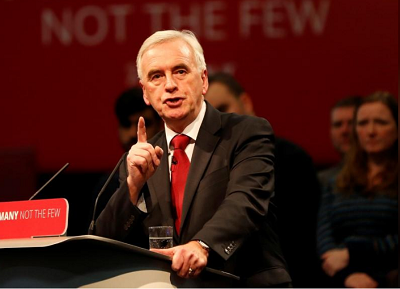 McDonnell, a veteran socialist who has won over many voters with his promises to re-nationalise services and increase public spending, is seeking better relations with London’s lucrative financial sector.

“There are some policies that you will like and some of which you will be less enthusiastic about,” he told a conference on the future of financing at Bloomberg.

“I don’t expect some people to be overjoyed at having to pay a bit more in income tax or corporation tax or at the introduction of a Financial Transaction Tax.”

Despite his previous antipathy towards bankers, McDonnell is trying to win the support of financial leaders just as former Labour leader Tony Blair helped prepare his party for power with what was dubbed the “prawn cocktail offensive” in the 1990s.

However, McDonnell was clear that the party will seek to extract more revenue from the City of London, including proposals to expand an existing tax on shares to trading on other assets such as bonds and derivatives.

In return, McDonnell said Labour government would offer the finance sector a chance to influence policies and said will be “no tricks up my sleeves”.

“There will be a seat at the policy making and policy delivery table for you,” he said.

“We made it clear that Labour in government will intervene to shape the economy, and that willingness to intervene naturally includes the financial sector.”