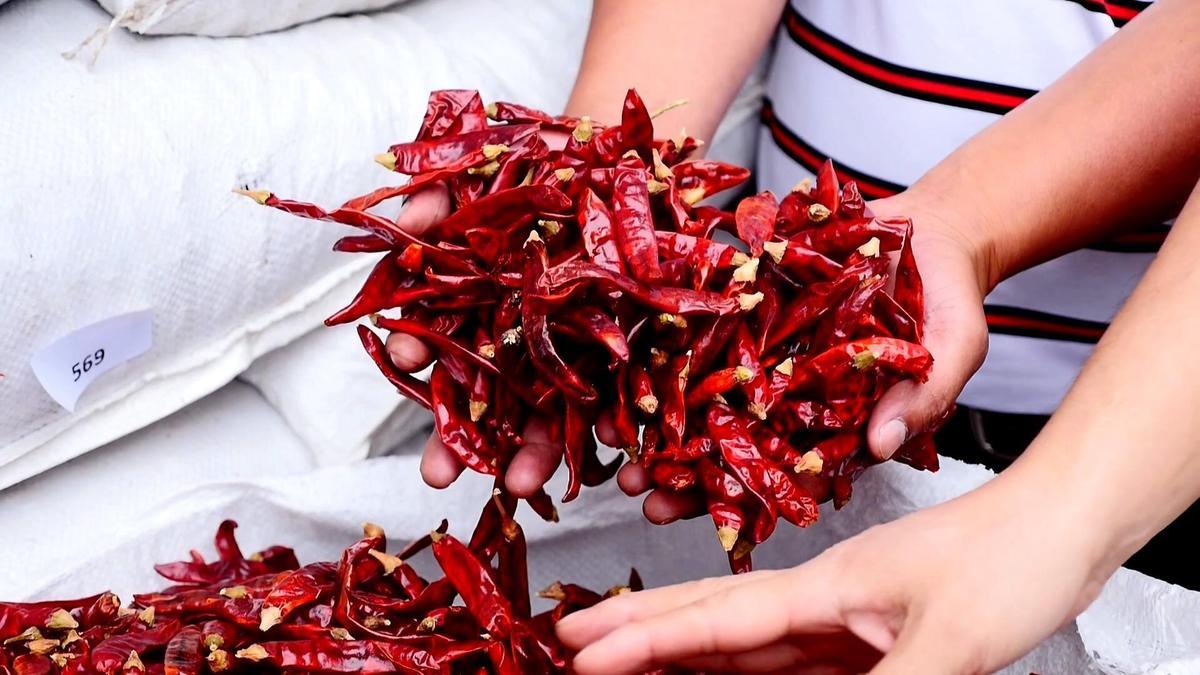 Indian farmer Prakash Nopo, 47, is busy organizing his fellow farmworkers as they pick chilies on his farm in India's southern state of Andhra Pradesh.

After cleaning, drying and packing, the chilies will be shipped from the port of Chennai, capital of the southern Indian state of Tamil Nadu, to Qinzhou Port in South China's Guangxi Zhuang autonomous region. And then, the chilies will be sent by rail to Southwest China's Chongqing Municipality.

Chongqing is one of the birthplaces of the dish known as "hotpot", which is widely popular for its spicy flavor. The China Cuisine Association credited Chongqing as China's hotpot capital. Indian chilies help improve the spiciness of Chongqing hotpot while keeping costs low.

Hotpot allows diners to cook almost any food in a boiling, often spicy, pot. The most common ingredients put into the pot include thinly sliced lamb or beef, offal, seafood and vegetables.

India is one of the world's largest chili growers. About 60 percent of India's chili peppers, or about 200,000 metric tons, are exported to China annually, 60 percent of which goes to Southwest China, where Chongqing is located.

Since 2017, exports of Indian chili to China have increased significantly, driving the export price to more than double, Nopo said. His planting area has expanded by 20 percent to 16 hectares over the past three years.

The opening of a new logistics channel helped bring more Indian chilies to Chongqing hotpot. In September 2017, the New International Land-Sea Trade Corridor was opened to connect Chongqing and other inland regions in western China with Southeast Asia and South Asia.

Compared with traditional transport routes, the new service takes seven days less than normal to bring Indian chili to Chongqing, with the cost for each container lower by about 2,000 yuan ($306).

"Despite the COVID-19 pandemic, our Indian chili imports have grown this year with the help of the New International Land-Sea Trade Corridor," said Song Weijie, general manager of an importer in the eastern Chinese city of Xiamen.

Hotpot originated in the late Ming Dynasty (1368-1644), with its ingredients consisting mainly of local animal viscera.

However, these days, foods from all over the world can be found in Chongqing hotpot, including Spanish black pork, German butter and New Zealand tripe, said Brandon Berardo, 25, a US national who works for the international business department of Chongqing Dezhuang Industrial (Group) Co Ltd, a hotpot chain operator.

Some foods are imported because they are in short supply in the domestic market, while others are to cater to changes in people's consumption styles, Berardo said.

For Wang Dayu, 64, a resident of Chongqing, the most classical ingredients in the hotpot have long been animal innards like beef omasum, pork aorta and duck intestine. Now he also wants to have a taste of foreign foods.

"In the past, there were no foreign foods on hotpot menus and even if there were, we also could not afford them," said Wang. "Now they are already here and we can also afford them."

The growing abundance of hotpot ingredients reflects the continuous opening up to the outside world of China, a nation that has a per-capita GDP of over $10,000 and a middle-income population of 400 million.

Chongqing, an inland city, is now better connected to the world through such international logistics channels as the New International Land-Sea Trade Corridor, the China-Europe freight-train service and the country's longest waterway, the Yangtze River.

Foods from all over the world arrive in the city in an efficient and fast way, and are gathered in hotpot.

The world's second-largest economy has repeatedly declared that its doors will not be closed, but will only be opened wider.

More international foods are expected to join the hotpot, and more global goods will enter the vast Chinese market, which is as open and inclusive a melting pot as the hotpot.