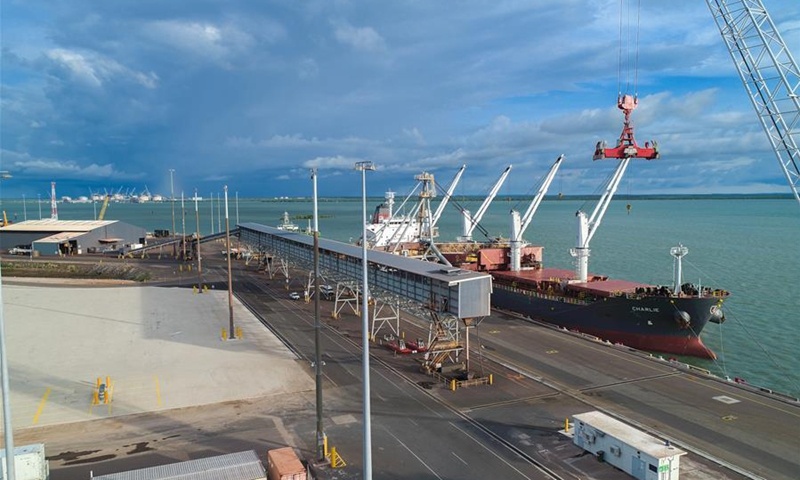 Chinese company Landbridge Group on Wednesday lashed out against Australia for "breaching basic contract spirit" and said it might resort to legal action, after the latter was reportedly turning back on a former lease of Australia's Darwin port to the company amid fraying relations between the two countries.

"Certain Australian's comments have breached the principle of mutual trust in business operation, and has cast serious negative influence on Landbridge's business operation...Landbridge will consider protecting our interests through legal action based on developments of the case," Landbridge said in a statement on Wednesday.

It also stressed in the statement that Landbridge's lease of Darwin port is "mutually beneficial commercial activity that does not involve any security issues."

The firm made the criticism after the Australian government was said to reviewthe99-year lease of the port to Landbridge, which might cause the Chinese firm to loseleaseholdof port.

Landbridge had won a bidding process in 2015 to operate the port in a signed deal worth about A$506 million ($390 million).

In the aforementioned statement, Landbridge stressed that it had gone through auditing from the local government, Australia's Department of Defense as well as other Australian investment laws when it cut the deal, and the acquiring had been judged as being in line with all Australian laws at that time.

Chen Hong, a professor and director of the Australian Studies Center at East China Normal University, said that Australia's turning back on the Darwin Port lease shows that Canberra is creating difficulties for China-Australian business cooperation after it jumped on the US-initiated anti-China bandwagon.

"As the Darwin Port lease is a purely commercial activity, Australia's breach of the contract means it will pay a huge sum of compensation to Landbridge, which is surely a big burden on Australian taxpayers," Chen told the Global Times.

Chen noted that Australia has been trying to enhance its global strategic role by following the US initiative of confronting China, although this is causing a disastrous impact to its economy.

Landbridge also stressed on Wednesday that Darwin Port has performed well in recent years, with its total vessel gross tonnage reaching 30 million tons by the end of 2020. The port also provides 100 direct jobs and 200 indirect jobs to the local economy.

"We urge the Australian government and the media to pay more attention to the benefits brought by the Belt and Road Initiative to China-Australia cooperation in areas like policy communication, trade, capital exchange and infrastructure build-up," Landbridge said in the statement.