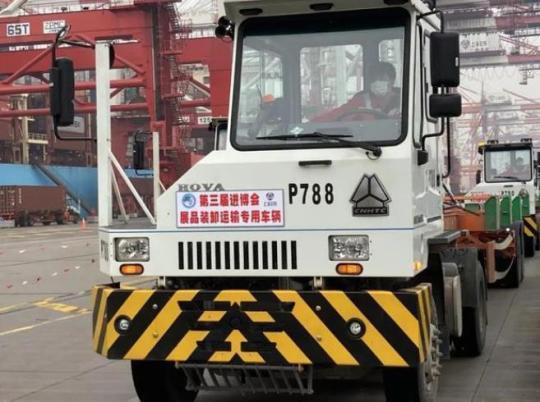 The largest exhibit for the 3rd China International Import Expo has earned a "paperless" clearance in Shanghai, Yicai reported on Thursday.

Dubbed the "Mediterranean Camille", the 86.7-ton gantry machine was put into 10 containers due to its huge size and arrived in Shanghai by sea on Wednesday night. It will eventually be reassembled at the CIIE venue and obtain a C position in the Chinese market.

Another batch of 45 items with a net weight of 4.16 tons has also arrived in Shanghai to be showcased at this year's CIIE.

At present, over 100 batches of exhibits, with customs declaration value of more than $7.51 million, have completed customs clearance and been sent to the National Convention and Exhibition Center in Shanghai for the 3rd CIIE, according to the Shanghai Customs District.

The peak time of exhibits entering China is expected to be in one week, the report said.

The exhibitors only need to upload documents via one window, and customs staff can review the documents online and allow them to enter, improving the efficiency of the clearance.

In addition, one-window-for-all services, 43 special passages and 79 special windows have also been provided for this year's CIIE, giving enterprises priority in customs procedures including declaration, inspection, sampling and testing.

A new tax insurance guarantee was added this year, making guarantee methods more flexible, more efficient and lower in cost. The exhibits can also be transferred to special monitoring areas for cross-border e-commerce, which turns exhibits into products.

The scope of blockchain businesses has also been expanded by customs this year.

Strong support has also been given to Greenland Global Commodity Trading Hub and Hongqiao Import Commodity Exhibition and Trading Center, attracting brands from Japan, South Korea, the US, Australia and European Union.

About 15 new national pavilions made their debuts on Sept 15 at the Greenland Global Commodity Trading Hub, the largest import commodity trading service platform with most national pavilions in China. The platform has attracted hundreds of businesses from over 60 countries and regions.