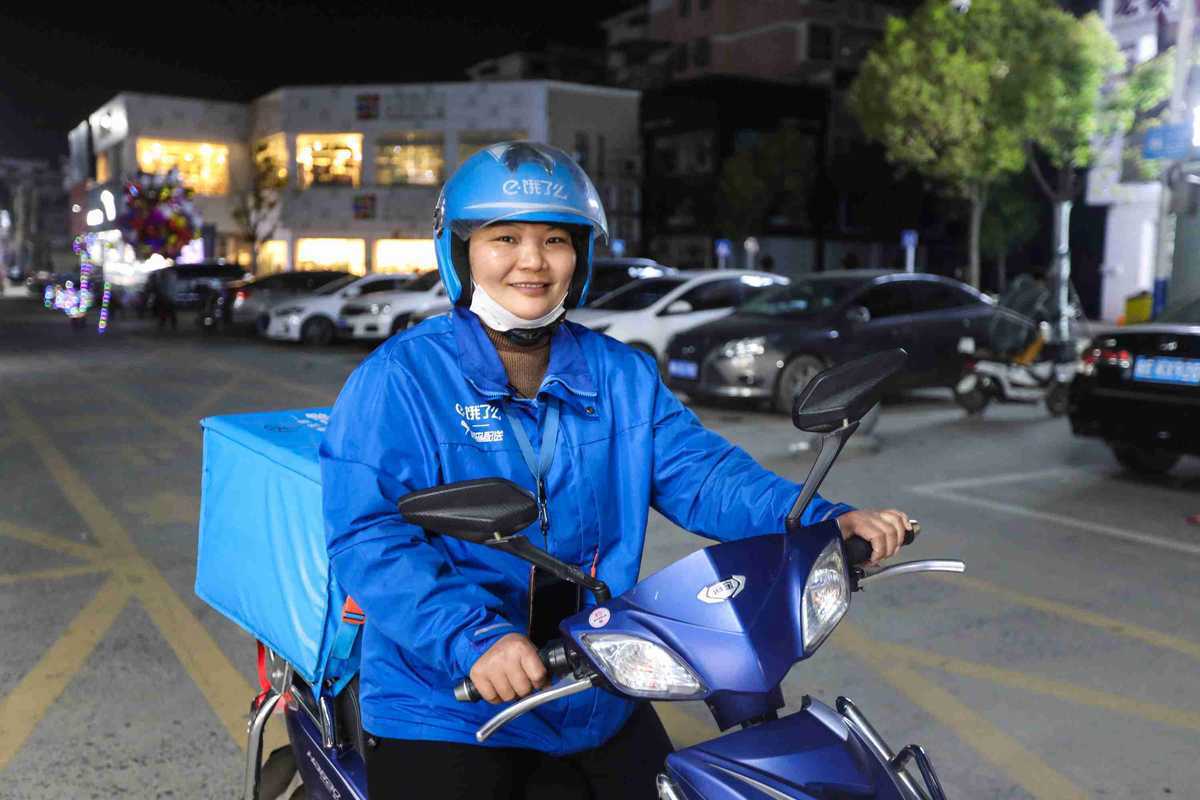 A courier with Ele.me in Funan county, Anhui province, poses for a photo on her way to delivering goods. (Photo: China Daily)

The late-night catering sector is springing back to life in summer, with the COVID-19 pandemic steadily receding in China. More food delivery orders at night have been seen nationwide at camping sites, hotels and gyms.

This summer, food delivery orders made at late night from camping sites, resort hotels and gyms jumped 30 percent or higher over late-night orders in spring. The order volume more than doubled that recorded in summer last year, according to a new report released by Ele.me, a major food delivery platform in China.

In particular, late-night food orders made from recreational vehicle camping sites surged nearly three times over the spring. At RV camping sites in Dalian, Liaoning province as well as Wuyishan and Xiamen of Fujian province, many young travelers ordered barbecue, snacks and mixed fruit at night.

"This summer, we encouraged restaurants and retailers to extend their operating hours, and deliverymen will deliver a variety of food and drinks to places where consumers work and relax. Food delivery options available late at night can help fuel more consumption potential in the evening," said Shen Yi, director of the midnight food delivery business at Ele.me.

Since the pandemic, Ele.me has conducted a group of livestreaming training sessions for catering operators about food safety and pandemic prevention measures. The company also launched more self-pickup smart cabinets in downtown areas of Changsha, Hunan province and Nanjing, Jiangsu province to promote contactless delivery and avoid possible spread of the virus.

Crawfish, a delicacy that has been quite popular on Chinese dinner tables and as late-night snacks over the years, remains the most popular food ordered at late night. This summer, crawfish cooked in a variety of ways have been delivered to office buildings, hotels and camping sites at night, Ele.me said.

During the late night period between 9 pm and 6 am this summer, the number of orders of icy drinks surged five times while those of crawfish doubled over the same time period in the spring, the report found.

Besides, fruit and salads late at night also became popular this summer, with orders -- many from gyms, sports venues and KTV lounges -- up more than 50 percent year-on-year, as young people have become more health-conscious.

"The late-night dine-in business at restaurants and food delivery business at night, as well as spending at bars, are expected to see a rapid growth in the next few years, as young consumers show rigid demand for late-night consumption," Zhu said.

Beijing, Shanghai, Guangzhou of Guangdong province, and Changsha of Hunan province are listed as cities with the most dynamic nightlife, with consumers spending a lot at night.

Besides, this summer, the coastal city Xiamen saw 85 percent of catering operators extend their business hours past 9 pm, and local consumers have shown enthusiasm for ordering food at night, Ele.me said.

Ele.me's branch in Quanzhou, another coastal city in Fujian province, said this summer, the city has seen an apparent increase in the number of food orders at night, and the company has endeavored to hire more deliverymen who can work the late-night shift. The seaside city Sanya in Hainan province also saw a large number of active late-night consumers, and most food orders at night came from hotels and vacation resorts.

Based on the volume of food orders late at night in the summer and the density of restaurants, the Donghu Road in Quanzhou, the business district near the Grand Canal in Hangzhou, Zhejiang province, and a business district in Shenzhen, were considered the most dynamic areas for late-night food consumption nationwide, the report found.