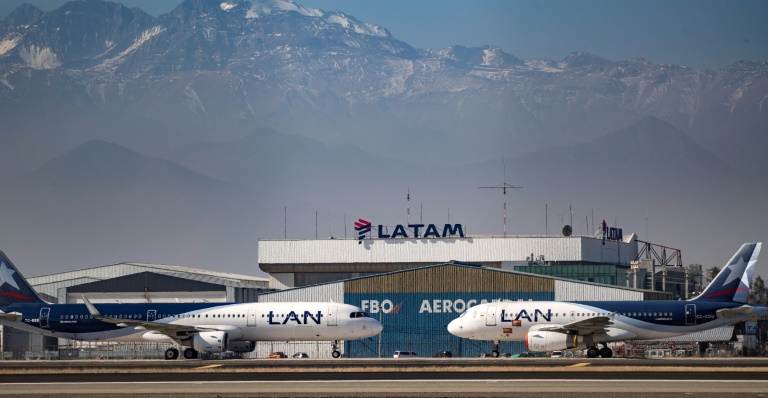 Latin America's biggest airline, the Brazilian-Chilean group LATAM, filed for bankruptcy in the US in May, after which its shares plunged 35 percent in the Santiago stock exchange. (Photo: AFP)

Latin America's beleaguered airlines will take up to three years to recover losses due to the coronavirus pandemic, and in the meantime desperately need government help, according to experts surveying the damage to the industry.

The International Air Transport Association (IATA) estimates it will take at least that time for the region's airlines to inch back to their pre-pandemic level for domestic and regional flights.

Long-haul services to the United States and Europe will take until 2024 to come back, it says.

"It's a long-range view; it will not be short term. It will take a lot of work," said Peter Cerda, IATA vice president for the Americas.

Evidence of the severity of the crisis came last week when the region's two largest airlines, Chilean-Brazilian LATAM and Colombia's Avianca, filed for bankruptcy in the United States.

With countries across the region in lockdown, flight activity has plummeted 93 percent from around 200,000 a day, with losses in revenue estimated at $18 billion.

Cerda says that figure is likely to increase.

The IATA official says the impact to the industry is even worse than the aftermath of the September 11, 2001 attacks on the United States.

"We are going to have airlines that are not going to be able to recover, that will have to shut down their operations for good," he said.

After almost three months of lockdowns and restrictions on movement across the region, airlines have run out of cash and government support is "urgent," he says.

"What we are asking for is not a financial rescue. It's support, immediate relief that allows the industry to sustain operations," said Cerda.

Airlines are seeking tax relief and credit guarantees from governments.

Globally, government aid to the airline sector stands at $123 billion, including $300 million from Latin America, according to IATA.

"Airports and airlines as well as governments are all losing out at this juncture," because of the lack of connectivity across the continent, says Fernando Gomez Suarez, an aviation industry analyst in Mexico.

Governments are conscious of the broader effects and Chile is considering a bailout for LATAM, seeing the airline as vital to the economy, and seeking to preserve 10,000 direct jobs as well as the livelihood of up to 200,000 people the government says are dependent on the airline indirectly.

The company is also holding discussions with the governments of Brazil, Peru and Colombia to save jobs there.

In Brazil, the largest internal market in the region with 90 million passengers a year, private banks headed by a development bank have granted a $1.1 billion loan to its three largest airlines -- Gol, Azul and LATAM.

Gol and Azul first had to agree to cut executive salaries and provide special rates and packages to stimulate recovery.

In Mexico, the region's largest destination for foreign tourists, Tourism Minister Miguel Torruco insisted his country would continue to have "strong, solid airlines."

IATA said talks are underway with the government to reduce airline charges.

The country's largest, Aeromexico, will resume some routes starting Monday, though ratings agency S&P lowered its credit rating this week due to the possibility of its debt being "unsustainable."

In Argentina, state-owned Aerolineas Argentinas announced a merger with its subsidiary Austral this month to reduce infrastructure and staff to save up to $100 million.

IATA meanwhile warned about the impact of the government's decision to keep Argentina's airspace closed until September.

Airline workers who escaped mass layoffs have had to take full or partial wage cuts to keep their jobs.

"Imagine losing half or more of your salary... and the bills keep coming in," says Jose de Jesus Suarez, spokesman for the Mexican pilots union ASPA, whose members have gone from six flights a week to just one or two a month.

Analyst Gomez Suarez says the markets left vacant by stricken airlines will quickly be absorbed by others.

And he says their most urgent challenge will be to harmonize new health protocols between countries, which will mean higher costs for passengers.

"People will keep flying. Of course, they will have to change their habits and customs."