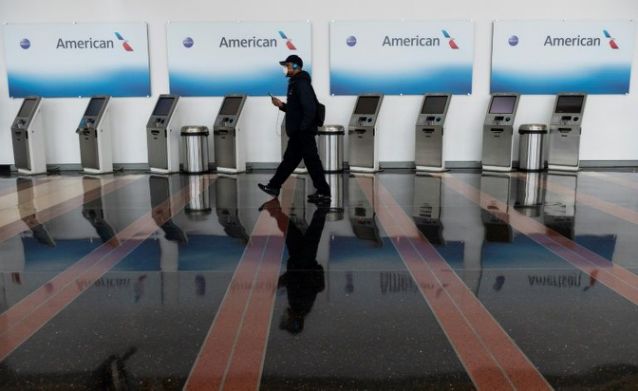 Airline travel remains depressed, prompting US carriers to resort to voluntary leave programs and warn of layoffs as soon as this week. (Photo: AFP)

Workers from the beleaguered US airline industry were making a last-ditch public appeal this week to coax more money from Capitol Hill power brokers to save their jobs.

The first day of October concludes the period when US carriers that received billions in aid from Congress promised to refrain from laying off workers.

American Airlines was the first to announce cuts, saying it will begin furloughing 19,000 workers from Thursday as US officials have failed to reach a deal on fresh aid to the pandemic-hit air travel sector.

A package of loans totaling up to $25 billion to seven US carriers announced Tuesday night by the Treasury Department provides funds for airlines to ride out a prolonged downturn amid the coronavirus, but won't affect plans for furloughs, airline sources said.

Treasury Secretary Steven Mnuchin said Wednesday on CNBC he was hopeful airlines would postpone layoffs if congressional leaders can reach a framework for a deal, saying it was "critical" for Congress to act.

Meanwhile, flight attendants have taken to social media with tearful photos of what could be their last flight on the job and anxious appeals for lawmakers to act.

"I cannot afford to be jobless (for) over a year," wrote one flight attendant on Twitter, saying she was a single mother who spent 14 years as a flight attendant. "American families need relief too!"

While the stalemate in Washington over stimulus has pinched unemployed workers and put public sector employees on notice, vulnerable airline workers have in some ways been the poster children for the impasse.

House Speaker Nancy Pelosi and Mnuchin held talks again Tuesday and agreed to keep negotiating. But a deal is still far from assured.

Since the coronavirus intensified in March, US airlines have been grounding planes and delaying jet deliveries to limit their cash-burn as air travel remains at about only one-third of its level a year ago.

Carriers have struck agreements with unions to spread out work among employees. Tens of thousands of employees have also accepted unpaid leave or early retirement packages to avert the need for involuntary terminations.

Still, the decisions will not be enough to avert all job cuts. Airlines have said they do not expect a full recovery until a vaccine is widely available, which company executives have said may not be until late 2021.

Unions have said 100,000 people or more could be laid off without additional federal aid, but analysts expect a smaller number than that as airlines and unions seek ways to avoid layoffs.

In the latest such deal, United Airlines on Monday reached an agreement with its pilots union to avert furloughs of 2,850 employees.

However, United is still on track to furlough as many as 13,000 other workers as soon as October 1. These include flight attendants and staff in other airport operations.

Southwest Airlines has said it does not plan involuntary job cuts.

The Delta Air Lines pilot union last week said it reached an agreement with the company to avoid furloughs until at least November 1 to give congressional talks more time.

Peter McNally, an analyst at research firm Third Bridge, predicted there would be significant downsizing throughout the industry.

"The businesses cannot support the cost structure as it is," McNally said in an interview. "They worked around it through furloughs and early retirement and voluntary departures, but there are still going to be a lot of layoffs.

"The recovery has just not come as quickly as people had hoped," he said.

Airline workers are hardly the only losers from Washington's inability to enact fiscal stimulus.

Laid-off workers had been receiving $600 in weekly supplemental unemployment benefits under a provision of the CARES Act that expired at the end of July.

President Donald Trump authorized an additional $300 in weekly spending by tapping federal emergency funds, but those funds are also running out and expected to be gone in October, said Nancy Vanden Houten of Oxford Economics.

"Households got quite a boost from these benefits, so we're going to see a pretty big drop-off," she said in an interview.

Another vulnerable group is public sector workers, who face an uncertain future as governments struggle with lower tax revenues and, in many cases, balanced budget rules.

The most recent version of House Democrats' "Heroes Act" includes more than $400 billion in funding for state and local governments, a provision Republicans oppose.

The Economic Policy Institute has estimated that failure to provide support to local government could cost 5.3 million jobs through 2021.