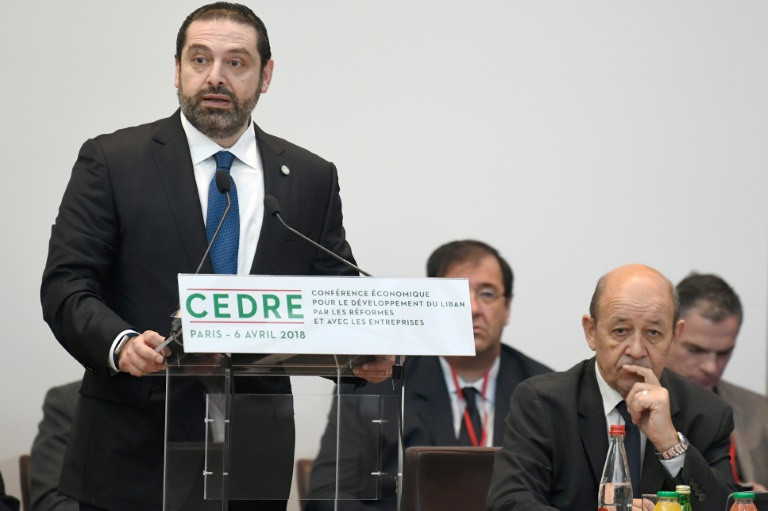 International donors pledged $11 billion in low-interest loans and aid for Lebanon at a conference in Paris on Friday to try to avert an economic crisis in a country hard hit by the fallout from the Syrian war.

Lebanon's growth has plummeted due to political instability, with the effect compounded by the Syrian conflict which has sent a million refugees across the border -- equivalent to a quarter of the Lebanese population before the conflict.

Some 40 countries sent representatives to the CEDRE conference in Paris along with officials from the World Bank and the International Monetary Fund where an aid package, made up 90 percent of low-interest loans, was agreed.

Praising the "exceptional generosity of the Lebanese people" with regard to Syrian refugees French President Emmanuel Macron said the world needed to show "full solidarity" with Lebanon.

The support was all the more critical given that the continued fighting in Syria "makes the imminent return of Syrian refugees impossible," he added.

Among the biggest donors was the World Bank which pledged more than $4 billion over five years, while France opened the conference with a promise of 550 million euros.

Saudi Arabia, which vies with arch-rival Iran for influence in Lebanon, said it would renew a $1-billion line of credit to Beirut which had been agreed in the past but never used, Lebanese officials said.

Iran, which backs Lebanon's powerful Hezbollah Shiite militia, was not invited to the meeting.

"In a Middle East shaken by crises, wounded by civil wars, Lebanon remains a model of pluralism, tolerance and openness which we need," French Foreign Minister Jean-Yves Le Drian said.

"But Lebanon is not an island. It's borne the full force of regional tensions and the Syria crisis," he said, adding that it was also grappling with the threat of terrorism.

An economic adviser to Lebanese Prime Minister Saad Hariri, who was at the conference, estimated the total amount pledged in loans and grants at $2.6 billion by midday.

The figure did not include the World Bank's offer as well as that of the European Bank of Reconstruction and Development (1.1 billion euros), the European Investment Bank (800,000 euros) and Kuwait ($700,000).

Economic growth in Lebanon has plunged from eight percent since the start of the Syrian war to around one percent.

"Lebanon cannot succeed alone," Hariri said, adding: "It's not just a matter of Lebanon's security, it's about the security of the region and the whole world."

France, which had mandate power over Lebanon for the first half of the 20th century, has been leading efforts to try stabilise the country.

When Hariri announced his resignation in November, a shock move in which many observers saw the hand of Saudi Arabia's de facto leader Crown Prince Mohammed Bin Salman, President Emmanuel Macron intervened, inviting Hariri to Paris for talks before his return to Lebanon, where he withdrew his resignation.

The Paris conference was aimed at giving Lebanon a boost as it prepares for its first general elections in almost a decade in May.

While the small country has managed to avoid a major spillover of the fighting in Syria, it has long been wracked by domestic power struggles, inefficiency and corruption stemming from its own 1975-1990 civil war.

With the government forecasting a deficit of $4.8 billion for 2018 -- more than double that in 2011, when Syria's war started -- economists say the state urgently needs to reduce its spending.

But public services such as water supplies, electricity and waste management have suffered rampant underinvestment, compounding problems that date back decades.

"The political idea behind (the investment plan) is that the Lebanese state could be able to provide services and infrastructure to the public, rather than others," an aide to Le Drian said, referring to the social role also played by the controversial Hezbollah.

Lebanon will for its part sign up to a string of reforms including tougher measures to fight corruption.