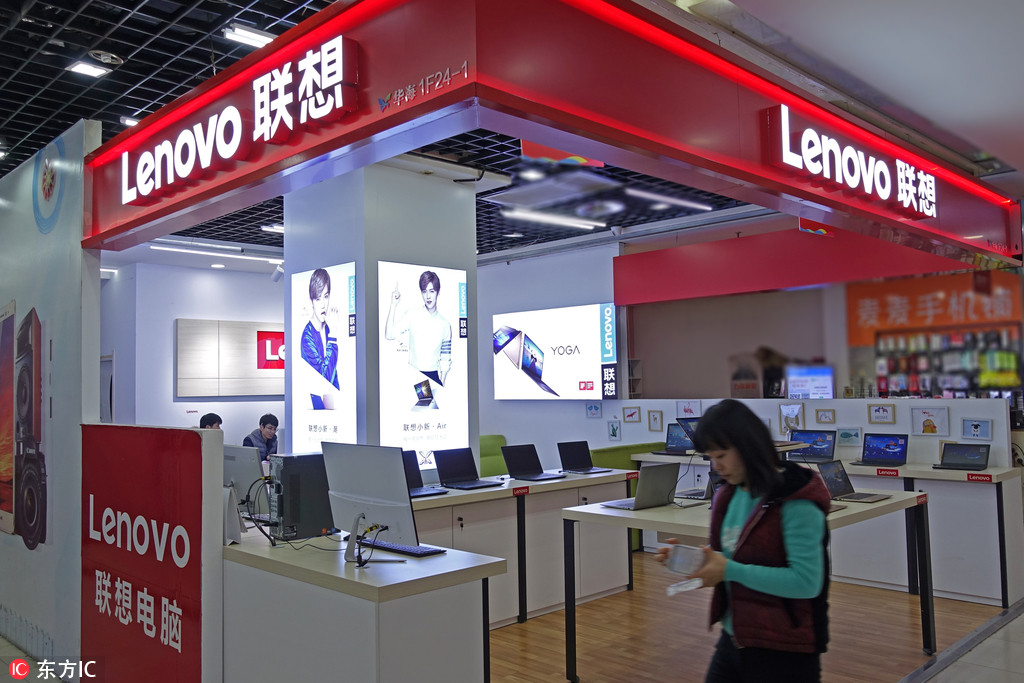 A customer walks past a store of Lenovo in Nanjing city, East China's Jiangsu province, on Jan 12, 2018. [Photo/IC]

The company's full-year net loss was $189 million, reversing from a net profit of $535 million a year earlier and was worse than the average forecast for a $145 million net loss from a poll of 22 analysts by research firm FactSet.

The Chinese PC maker's full-year revenue rose 5.4 percent to a 3-year high of $45.4 billion, promoted by the transformation of the company, the latest financial report said.

In the January-March period, Lenovo reported a 69 percent drop in net profit to $33 million from $107 million a year earlier, with higher operating expenses, according to the financial report.

The new US tax code took effect on Dec 22, 2017, and the tax rate of US companies was reduced to 21 percent, starting from Jan 1. Due to the changes of the code, Lenovo booked a non-cash write-off charge of $400 million on the deferred income tax assets, weighing on its full-year results, the report said.

Lenovo said the company can benefit from US's low tax rate in the long run, according to the financial report.

The Chinese tech giant recommended a final dividend of $20.5 cents per share and its shares were 0.3 percent lower at midday ahead of the earnings release, according to MarketWatch.

Although facing challenges during transformation, the company has entered into a turning point and it was on the right track to go upwards again by implementing business strategies on PC, tablet PC, data center services and mobile services, Jiemian.com reported citing Lenovo Chairman and CEO Yang Yuanqing's words in an internal email.

Lenovo will continue to invest in internet of things devices, big data and artificial intelligence technology to make the company more competitive in providing smart solutions in vertical industry, according to the report.