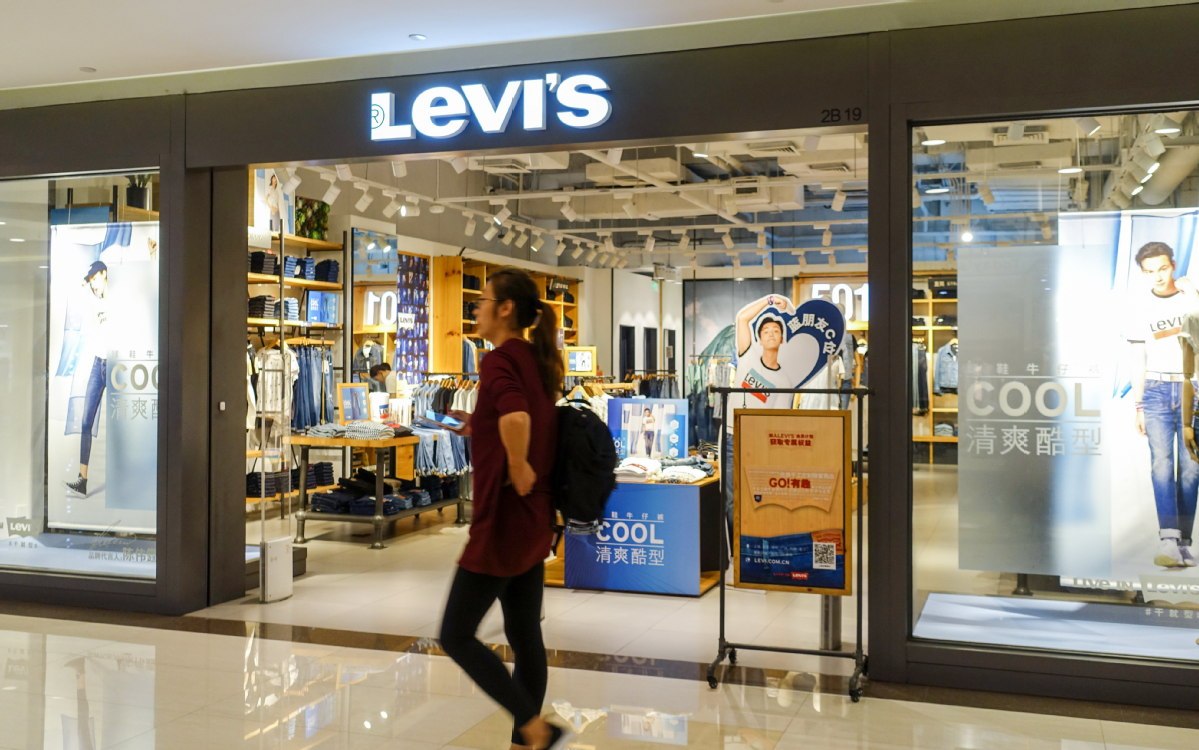 A shopper passes a Levi's outlet at a mall in Shanghai. [Photo provided to China Daily]

For 167-year-old US clothing company Levi Strauss & Co, which is well-known for the denim brand Levi's, China is more than an important constituent of its global supply chain but also a major consumer market and a key innovation center, Levi's China Managing Director Amy Yang said.

While the COVID-19 pandemic impaired the company's global sales this year, Yang said they will continue to invest in China by updating and opening up to 30 stores in the country's first and second-tier cities by the end of this year.

One of the latest moves in physical store mapping is Levi's flagship store which opened on Friday on Nanjing Road Pedestrian Street in central Shanghai－a Fifth Avenue-like shopping destination－receiving about 1 million visitors every day.

Covering some 670 square meters, the store is the largest of its kind in Asia, with total investment amounting to over 100 million yuan ($14.5 million), said Yang.

While online retailing value increased 9 percent year-on-year to reach 6.08 trillion yuan during the first seven months of the year, as found by the Ministry of Commerce, a physical presence is crucial to enhance the brand's recognition and user viscosity, Yang said.

Brick-and-mortar stores can provide more detailed insights of consumers and even market forecasts through offline experiences, she said.

While the company's store opening plans focus on first and second-tier Chinese cities, the consumers in lower tier cities, especially the younger generation, are just as valued, to whom Levi's is more frequently presented via dealership and e-commerce platforms, added Yang.

As Yang further explained, digitalization is the first step for sustained development in China. An omnichannel strategy combining online and offline platforms is key for Levi's in China.

"The Chinese consumers are highly sophisticated. Their budgets were not even impaired during the epidemic, as long as the product addresses certain needs. They are not only taking the lead worldwide in terms of the adoption of technology and digital solutions, but even regarding the understanding of fashion," said Yang.

Levi's set up a big data and artificial intelligence team in China earlier this year which works as the data center for Levi's in Asia. The findings from this team in China will also serve all the other markets for Levi's, she said.

Market consultancy Kantar Worldpanel said about 30 percent of Chinese families used O2O services during the second quarter, which is slightly down from the 35 percent in the first quarter. But robust demand by consumers for O2O services has pushed retailers to strengthen cooperation with online platforms, said Kantar Worldpanel analysts.

As of May 24, 2020, Levi Strauss and Co saw its products sold in over 50,000 retail locations in more than 110 countries, including approximately 3,200 brand-dedicated stores and shop-in-shops. Sales of Levi's brand products represented 87 percent of the company's total net sales revenue in the first six months of fiscal year 2020.

While the gross margin of Levi Strauss & Co contracted by 19.2 percentage points to 34.1 percent, according to the company's second quarter fiscal results which ended May 24, 2020, the company's wholesale margin rose due to the benefit of price increases and a higher proportion of sales in China, the company said.