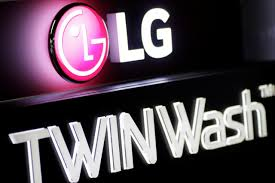 The LG logo is seen on a washing machine in Singapore January 26, 2018. REUTERS/Thomas White

LG Electronics Inc said on Thursday it was planning to raise prices of its washing machines in the United States by about 4-8 percent in March in response to tariffs on large residential washers imposed by U.S. President Donald Trump.

LG and rival Samsung Electronics (005930.KS) had hoped to avoid any fallout from Trump’s “America First” trade policies, but took a hit after his decision last month to impose tariffs of up to 50 percent on imports of washing machines and key components.

According to a South Korean newspaper, the two companies are planning to hike the prices of their washing machines in the United States by about 5-10 percent in the second quarter.

LG Electronics USA spokesman John Taylor, who last month confirmed that prices would rise, said the increase works out to about $50 per machine, and would become effective March 8.

The company is absorbing a significant portion of the tariff in order to “minimize disruption” in supplies to its customers, Taylor added.

LG is racing to construct its first U.S. factory in Clarksville, Tennessee, by the fourth quarter of 2018 to avoid market share losses that could reduce employment at the facility.

The company will concentrate its efforts on selling more of its premium washing machines, priced at $900 or more, in the United States, an LG spokeswoman in Seoul said.

Asked previously if it plans to raise washer prices in the United States, Samsung had said it was reviewing the implications of the U.S. decision and any changes would be discussed with its business partners directly. Samsung has already begun production at its new U.S. washer factory in Newberry, South Carolina.