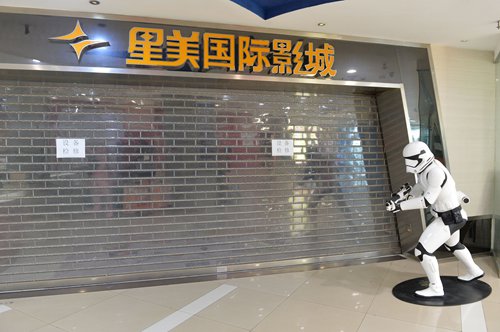 A Xingmei cinema is shut down in North China's Tianjin in September 2018. (Photo: VCG)

Multiple cinema chains in China have been closing down in face of fierce market competition, and those remaining will need new strategies if they're to survive, an industry analyst said on Thursday. Xingmei International Theater, once a well-loved nationwide cinema chain, is under severe financial pressure that may force it to close many of its locations.As of November 30, the company was running about 320 cinemas around China, 140 of which have been temporarily shut down. Another 11 are also at risk as they can't make rent payments, according to a company announcement on December 6. The cinemas are operated by SMI Holdings, a Hong Kong-listed company.In addition, the company still owes operating management and other expenses totaling approximately HK$459 million ($58.6 million), of which HK$108 million represents unpaid staff salaries and HK$201 million represents past-due rent.Xingmei's woes weren't an exception in the industry in 2018, despite a bigger box office.The national box office had reached 60.98 billion yuan ($8.87 billion) for 2018, up 9.1 percent year-on-year. In stark contrast, more than 300 cinemas were shut down last year. While traditional cinemas have been closing, the online video industry has been rising. Figures from the China Internet Network Information Center show that online video platforms are China's largest entertainment sector. As of June 2018, the number of users in China's online video industry reached 609 million, representing 76 percent of the country's total online users. Yan Xiaojia, an analyst at Shanghai-based iResearch Consulting Group, said on Thursday that in the short run at least, online video platforms will continue to have a huge impact on traditional cinemas, as customers have more options with online platforms. However, according to Yan, the competition between online platforms and traditional cinemas does not have to be a zero-sum game. "From a long-term perspective, the online audience and the offline traditional cinema audience are two different demographics with increasingly personalized and different needs," Yan told the Global Times. According to Yan, to survive the increasingly fierce competition in the market, traditional cinema chains will have to put an effort into branding, focusing on increasing service quality and niche marketing to cater to a more specific audience, if they're to differentiate themselves from online video platforms.