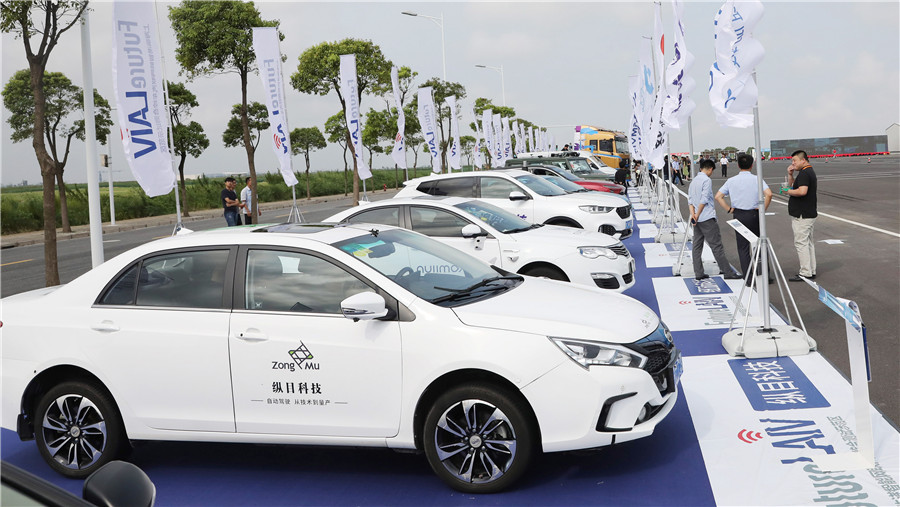 Work on the first phase of the testing and demonstration zone was completed recently. The demonstration area has 26.1 kilometers of open road test area and a closed testing area of 3.2 square km for connected vehicles, as well as a data center.

Unlike other such test areas in China, the Lingang center is fully equipped with 4G and 5G networks, making it one of the largest in terms of scale and amount of test scenarios, said Cang Xuejun, general manager of Shanghai Lingang Intelligent Connected Vehicle Innovation Center Co Ltd.

According to Cang, the closed road test area contains the nation's longest tunnel as well as roads ready to be covered with rain and fog, making the test scenarios complex and realistic. It would also conform to existing patterns in several domestic and international test zones, and cater to the requirements of companies and Chinese traffic data.

Intelligent connected vehicles, or connected cars, are vehicles equipped with internet access, or usually ones using wireless-based local area networks. This enables the car to access the internet and make intelligent connections with other vehicles, traffic, and environment like buildings and traffic lights, so as to make driving safer, easier, more comfortable and efficient.

Nearly 50 percent of all the new cars and vehicles in the country will be intelligent vehicles by 2020, while wireless networks will cover 90 percent of cars in major Chinese cities in the same period and all cars will be linked to China's homegrown satellite navigation system BeiDou, according to a development strategy announced by the National Development and Reform Commission.

Against such a backdrop, 22 provinces and municipalities had announced their plans to test autonomous vehicles by February. More than 100 license plates for road tests of connected cars were issued in 14 cities including Beijing, Shanghai, Chongqing, Shenzhen and Tianjin.

"The automotive manufacturing sector is one of the most advanced manufacturing industries that Shanghai is striving to develop. Connected vehicles are key to the city's upgrade plans and qualitative development of its automotive sector," said Zhang Jianming, vice-chairman of Shanghai Municipal Commission of Economy and Informatization.

To date, the city's 37.2-kilometer-long open road is facilitating a batch of domestic and international automotive manufacturers including SAIC Motor Corp Ltd, the largest auto company in China's A-share market, and Germany's BMW for up to 50,000 kilometers of testing and optimizing their autonomous technologies, said Zhang. 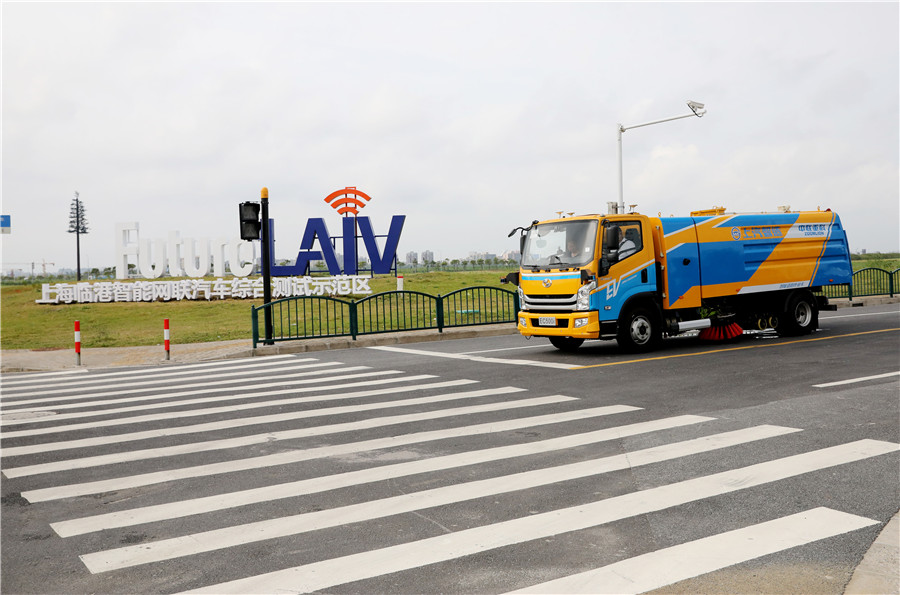 A self-driving street sweeper truck drives at the testing and demonstration zone in Lingang.

The environment for developing connected vehicles in China is getting better and it is projected to reach a market scale of above 100 billion yuan ($13.96 billion) by 2020, said Miao Wei, minister of industry and information technology, during a recent industrial expo in Beijing.

"China is without doubt the most promising country for development of self-driving vehicles. Nullmax as an autonomous driving technology company looks to improve its solutions through local tests," said Nullmax CEO Xu Lei, adding that Lingang is one of the ideal testing destinations for the Shanghai-based company.

But Lingang's ambition is not restricted to the land, but also in the sea and in the air, according to Gu Changshi, chief planner for industrial development with the Shanghai new Lingang Area Development Administration.

According to him, Lingang's special advantage of having all the transportation resources of aviation, ocean transport, railway, highways and inland waterways makes it possible to embed unmanned system into mixed transportation scenarios including ocean-road-rail transport, trucks, drones and unmanned vessels.

Lingang announced its plan for developing unmanned systems by road, air and sea in May 2018, and according to it, the area looks to create an innovative environment, a complete industrial chain as well as an ecosystem for related industries.