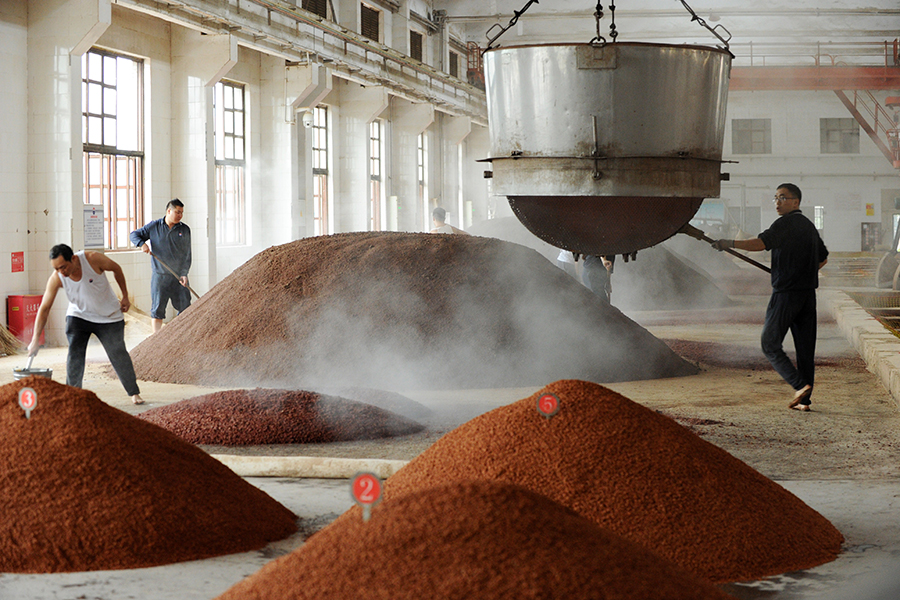 Employees of Kweichow Moutai Co Ltd work at the production line of the company in Renhuai, Guizhou province. (Photo: Xinhua)

Most investors are not surprised by the robust performance of Moutai. Earlier this year, many investment firms, including Goldman Sachs and China International Capital Corp Ltd, were bullish on the growth potential of the stock.

They set the target price of Moutai at more than 1,000 yuan per share, attributing it to China's sustained supply-side reforms and consumption upgrade, which have boosted investor sentiment toward such consumer stocks.

Moutai, a distiller from Maotai town in southwestern China's Guizhou province, has made substantial gains this year. On Jan 1, it closed at 598.98 yuan per share. On Thursday, it closed at 996.35 yuan per share, and its share price has surged 66 percent so far this year. Its performance has been better than 90 percent of the A-share listed companies.

Other major liquor makers are reporting solid sales and also saw outstanding performance during Thursday trading. They include Sichuan province-based Wuliangye Yibin Co Ltd and LuzhouLaojiao Group, which led the advance of the spirits and consumer sector.

This year, Moutai aims to achieve sales revenue of 100 billion yuan, growing 14 percent year-on-year, and reaching a net profit of 45 billion yuan. The company said it is strong and confident enough to drive further growth.

"The stock market now shows a prominent problem of polarization. Leading white-horse stocks have seen continued steady growth. The climbing share price of Moutai definitely gave a boost to many white-horse stocks, with the prices of several stocks reaching their new high, while some other themed stocks are being marginalized," said Yang Delong, chief economist at the Shenzhen-based First Seafront Fund.

Market demand for liquor products will likely remain strong, and major spirit makers are expected to witness more steady and structural growth and continue to remain competitive, Zhongtai Securities said in its report.