Increasingly strict regulations and fierce competition are making China's live broadcasting industry less profitable, with many platforms struggling to transform their business or just shutting down. 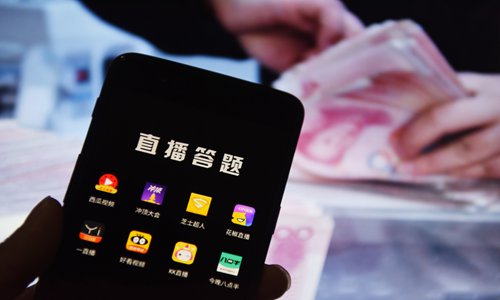 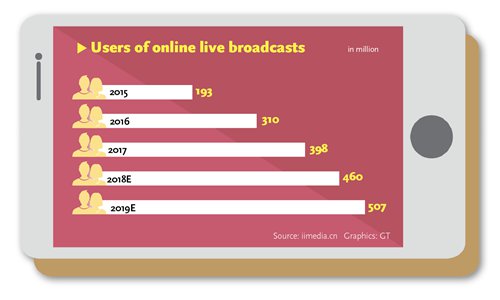 "Our broadcasting business has been closed," the former head of domestic live broadcasting platform doubuy.tv told the Global Times on Thursday. He declined to be identified.

Many factors including growing competition and lack of capital led to the shutdown, according to the person. "Too many new live broadcasting platforms emerged in 2017. Besides, our fundraising didn't go well. So we shut down live broadcasting," he said.

Doubuy.tv is symbolic of numerous live broadcasting platforms that have closed. As of the end of 2017, more than 200 companies provided live broadcasting services across the country, down nearly 100 from 2016, according to a report released by the internet performance branch of the China Association of Performing Arts in January 2018.

The industry's golden era is over, with a homogeneous business model and competition among platforms for host resources causing problems for many companies' operation, industry insiders said.

A 20-something man surnamed Li, who has been a livestreaming host on a popular platform in Beijing for more than a year, told the Global Times on Thursday that competition among large platforms is fierce while the user base on small platforms is tiny.

"What I've seen is that many small live broadcasting platforms often promise higher earnings in a bid to attract famous hosts with large numbers of fans," he said.

Increasingly strict regulations also contributed to the shutdown of many livestreaming platforms.

The Ministry of Culture carried out a special cleanup and rectification campaign in May 2017. It closed 10 live broadcasting apps and websites, penalized 48 operators and 31,371 presenters and terminated contracts with 547 presenters, the Xinhua News Agency reported in May 2017.

However, another live broadcasting platform's COO surnamed Gao told the Global Times on Thursday that overseas live broadcasting markets such as the US, Europe and even Southeast Asia are too competitive and it's hard to satisfy local users' needs. Gao declined to give his full name.

Gao said his company's platform integrated e-commerce to attract users, who can shop while watching performances.

Unlike platforms that offer online performances to individual consumers, lezhibo.com blazed a trail in providing live broadcasting services to corporations.

According to a report released by Guangzhou-based market research firm iiMedia Research in January, the growth of the number of Chinese live broadcasting users slowed significantly in 2017, with the growth rate at 28.4 percent, down 32.2 percentage points year-on-year.

It forecast, however, that the user base will surpass 500 million in 2019 from last year's 398 million. If it addresses genuine public needs, the live broadcasting industry can achieve sound development, the report said.