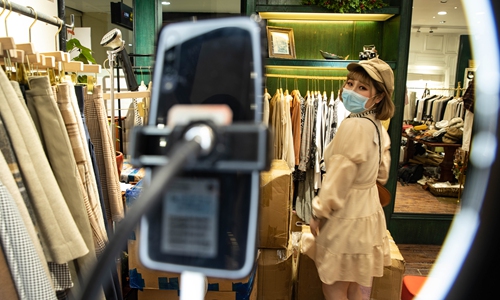 The day Wuhan, Central China's Hubei Province, lifted its 76-day lockdown was also the day online sales of local products of the province reached 17.93 million yuan ($2.5 million), while two days before the lockdown was scrapped, a two-hour livestreaming sales event of local products attracted more than 120 million online users, and Hubei products worth 40 million yuan had been sold out in about two hours.

The combined sales of these two livestreamed online sales events in the coronavirus' hardest-hit province accounted for about one percent of the Thanksgiving Day online sales in the US in 2019.

And it was just the beginning of the robust growth in online sales of local products, which are expected to become a major way to help job growth and boost industry recovery amid the coronavirus outbreak, and more Chinese internet giants such as Alibaba and TikTok are now empowering local farmers and small businesses, who have been struggling to mitigate the COVID-19 epidemic aftermath and cautiously resuming production.

What surprised the public most was more government officials in Hubei, for example, the mayor of Wuhan joined livestreaming programs to promote local products ranging from crayfish to hot dry noodles to lotus roots -- all local specialties and signature dishes favored by Chinese people.

Contrary to their stereotypical image as serious and rigid, mayors from different cities in Hubei are now considered the new cyber stars, who interact with online users, and also reflect a shifting mindset in governing and dealing with relations with local residents, observers said.

For He and local companies, it is the first time to try online promotion through livestreaming. About 50,000 boxes of crayfish were sold within two hours. Over 80,000 people watched the livestream, He told the Global Times on Friday.

He told Global Times they are considering inviting influential livestreamers to help sell products to promote sales and expand their market.

Crayfish is a pillar industry of Laoxin town. The breeding area of crayfish in the town reaches 75,000 mu (5,000 hectares), covering more than 75 percent of its arable land. The cultivation of crayfish reaches about 15,000 tons a year.

"Online promotion brings new hope to us," He said, noting online promotion and e-commerce will be the future development path of local sellers. They are now also reaching e-commerce platforms to expand their market for local products.

He thinks that online promotion delivers their products to the dining table of consumers nationwide directly. "We can get immediate feedback with the high efficiency of information transmission."

Due to the COVID-19, there is still some prejudice and discrimination against Hubei people and Hubei products as the region suffered the most and were the first region which reported a confirmed case in the country.

Blocked supply chain and logistics problems amid the pandemic also hampered local industries, He said, noting that through online promotions, such interaction with the public could help dispel people's doubts and win recognition for their products.

Zhu Guangquan, a young host of Chinese Central Television, also teamed up with Li Jiaqi - a top internet celebrity on TikTok who is also a male beauty blogger -- two days before the city lockdown was lifted to launch a product-promotion campaign for Hubei on Alibaba's marketplace Taobao, attracting over 120 million online users, and 40 million yuan worth of Hubei agriculture products sold out in two hours, according to media reports.

Since the second half of February, 37 heads of counties in different provinces have promoted local agricultural products, which have been severely affected by the coronavirus epidemic as the country ordered nationwide quarantine measures.

TikTok has helped boost the sales of over 1.13 million agricultural products, recording sales worth 60 million yuan, according to an industry report of iimedia.cn.

The market of livestreaming will cover 524 million people by 2020 in China with an overall value of 961 billion yuan, iimedia's report showed.

She also bought a preserved chicken from the sales channel, especially for Hubei products on China's e-commerce platform JD.

"I want to help Hubei people because they have suffered a lot," Wang said. "I think online promotions are the most direct way to help them as business owners need cash to survive."

She also thinks that such livestreams make her understand the products in a more intuitive way. "Everything can be bought online instead of offline now," she added.

As the city emerged from the lockdown, life in Wuhan is also regaining vitality, and the next target for local residents: Accelerate work resumption and prevent a rebound of the outbreak.

Meimei, an owner of three clothing stores in Wuhan, told Global Times that her stores are now doing livestreaming to sell products.

"We have about 500,000 fans on our accounts on Douyin and WeChat where we do livestreaming everyday," Meimei said, noting that sales from online promotions increased to 80 percent of whole sales, compared to 20 percent before the pandemic. "We will open livestreaming on more platforms in the future."

"My customers like such an approach and they barely ask for returns and refunds," Meimei said.

Meimei believes that online sales and physical stores complement each other. When she sees more and more people coming to the shopping mall since April 8, she feels confident to hold on more.