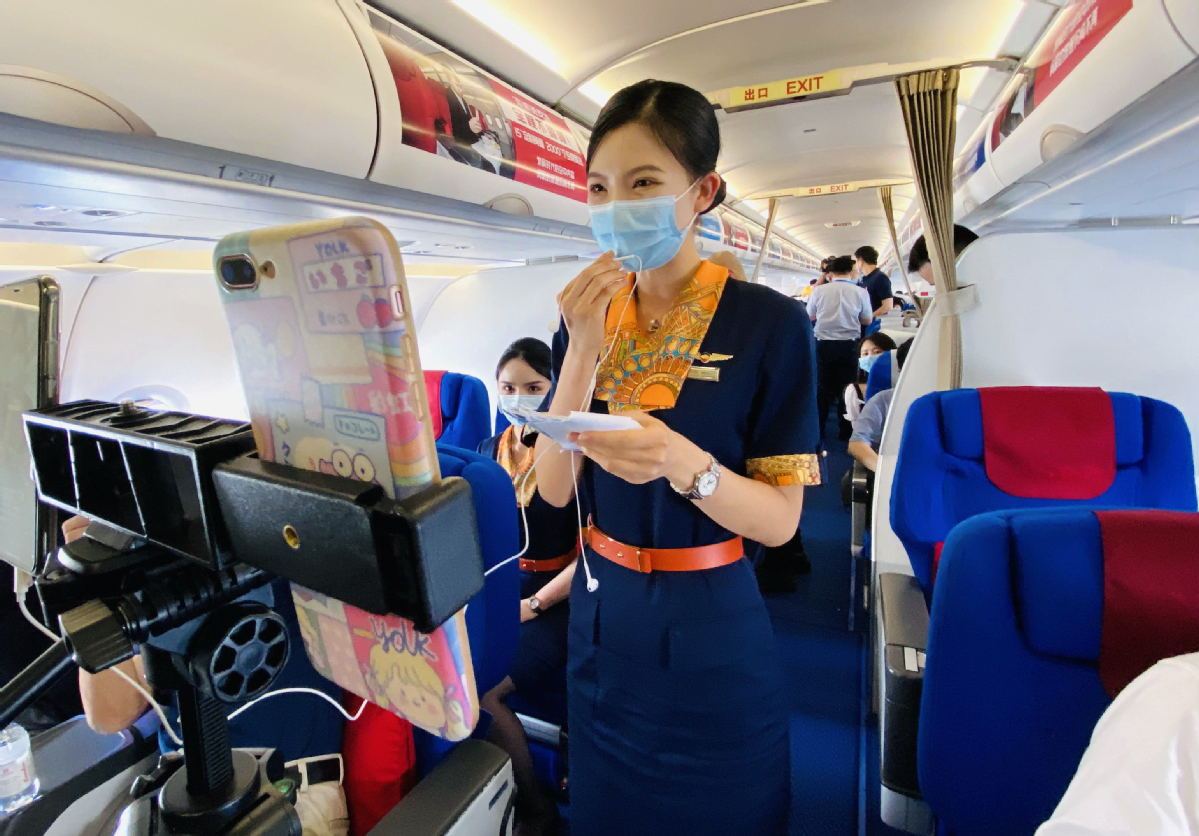 A flight attendant conducts a livestream session during a flight from Qingdao, Shandong province, to Chengdu, Sichuan province, on July 7. (Photo: China Daily)

More Chinese carriers have been holding livestreaming sessions as part of their latest efforts to stay afloat due to the impact of the COVID-19 pandemic, and they have reaped unexpected positive results through this approach.

As the global aviation industry suffers losses during the pandemic, Chinese airlines are fighting against the virus headwinds by leveraging the multi-billion dollar livestreaming market in the country.

Through livestreaming sessions on various platforms, carriers can sell extra-value products such as redeemable coupons and packages of flight tickets to increase their ancillary revenues.

In addition, they will be able to showcase their brand images, distinguish features of their services and interact with viewers. It is a path that is worth exploring further, an industry expert said.

"Conducting livestreaming sessions can help carriers attract more attention and promote their services. It is suitable for airlines to carry out such sessions, and there is still growth potential," said Lin Zhijie, an aviation industry analyst and a columnist at Carnoc, one of China's largest civil aviation websites.

Sichuan Airlines conducted an audition to select anchors among more than 1,000 candidates for its livestreaming sessions.

Usually, it's important for flight attendants to stand out with their good services and emergency reactions. This time, they need to compete with expressions, appeal, look, and familiarity with products to become anchors, the carrier said.

Shenzhen Airlines also took a group of livestreaming events on Fliggy, the online travel agency arm of Alibaba Group. It sold coupons of business class flights and its anchors traveled to Jingdezhen in East China's Jiangxi province to showcase the beautiful scenery there.

In May, Shenzhen Airlines launched its first livestreaming session online. During the program, it sold more than 1,500 units of different products and the sales revenue reached 150,000 yuan ($21,430).

After several livestreaming sessions, its online flagship store on Fliggy has attracted at least 52,000 fans to follow it, when most other online stores of carriers only have fans below 5,000.

"When carriers show the beautiful sceneries of beaches, valleys or an ancient city through a livestreaming session, it may stimulate consumers' desire to travel and thus create demand of flight tickets purchase. They can sell tickets with small profits but quick turnover," Lin said.

"Whether or not to conduct livestreaming sessions is related to the operation styles of different carriers. Such a move is an exploration of new marketing methods. Some companies have the courage to try something new, while others could be relatively conservative," he said.

Last year, several domestic airlines started to conduct a few livestreaming sessions online, but most of them hired third-party anchors and their own sales staff assisted with explanations.

Now, more carriers have trained their own flight attendants to be anchors, and sold more diversified products in front of the webcam. Next, Fliggy said it will help carriers normalize their livestreaming sessions on a regular basis.

In late April, its President Wang Yu became the first executive anchor among domestic carriers to hold a livestreaming session.

Later, Spring invited an executive in charge of multiple departments to join the livestreaming sessions and interact with viewers on various topics. It also showcased scenes of aircraft repair and maintenance, which attracted huge interest from audiences.

"A large number of active young internet users overlapped with our customers. We would like to take livestreaming as an important way to promote the brand and keep conducting such sessions, thus further attracting more potential travelers," said Zhang Wu'an, a spokesman of Spring Airlines.

Sales of coupons that can be redeemed for cabin upgrades, use of the VIP lounge at airports, and overweight luggage checks are quite popular during its livestreaming sessions. It said the trend indicated that tourists are increasingly paying attention to the quality of travel.