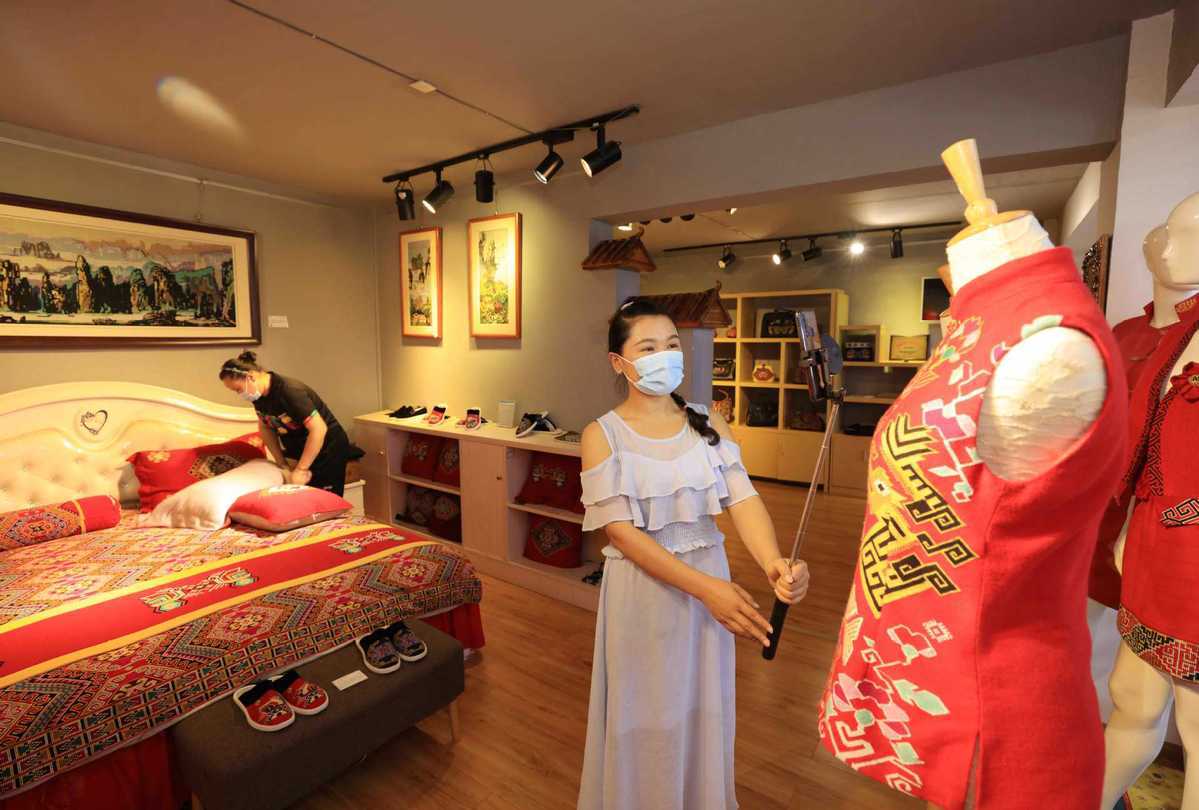 A salesperson shows the traditional clothing made of brocade via livestreaming platform in Guaiyaomei brocade basement at Wulingyuan district of Zhangjiajie, Hunan province, on June 10, 2020. (Photo: Xinhua)

It's 10 am, and Xie Guixiang, director of the publicity department of Wulingyuan district in Zhangjiajie, a top scenic spot in Hunan province, logged onto a livestreaming platform to promote the agricultural products from her hometown.

Xie never thought that livestreaming, a word she never understood last year, could have such a positive impact on her hometown's development. Ever since the scenic spot attempted to apply livestreaming to tourism promotion, the region's tourism industry has been rapidly picking up from the hit caused by the epidemic.

"The city's tourism industry revived fast in August. In July, our total tourists were only 40 percent of the same period last year. However, the number of tourists in August recovered to 70 percent of the level in last August," said Ouyang Bin, the deputy mayor of Zhangjiajie.

A report by Trip.com Group, the country's largest online travel agency, said that from March to July, its livestreaming chat room selling tourism-related products and services such as flight tickets and hotels generated sales revenue of 1.1 billion yuan, attracting more than 60 million viewers.

Liang Jianzhang, chairman and co-founder of Trip.com Group, played up to 20 characters, including an emperor, Jia Baoyu, from the early Qing Dynasty, a sea king, a rock star, and a comedian. Liang shared his hotel experiences to make the livestreaming session more vivid and attractive.

Livestreaming has become popular among online viewers. It set the record of selling 8,000 nights of hotel rooms in 1 minute, as well as selling over 41 sets of "hotel plus scenic spot ticket" per second. The tourism industry was revived in over 200 cities.

"The development of the internet has changed the whole pattern of the tourism industry. By actively taking advantage of livestreaming, we are building Zhangjiajie into a world-class tourism attraction. In the future, we will further explore and boost the revitalization of the region's tourism industry to achieve high-quality development," Ouyang said.

Han Mengying, a senior tourism analyst at Beijing-based market consultancy Analysys, said: "Through livestreaming, tourism products, such as flight tickets, hotel rooms, and tickets for tourist attractions are directly demonstrated to consumers. As tourism is a high-end consumption industry, livestreaming encourages consumers to go on a vacation and promotes the transaction."

"Livestreaming enables key opinion leaders to directly contact consumers, which improves the efficiency and quality of distribution of the industry," she said.

Du Shanchuan, general manager of the Beijing branch of Dreams Travel, said that during the epidemic period, livestreaming as an innovative marketing method plays an important role in reviving the tourism industry. It integrates online and offline to better demonstrate the value of tourism.

Compared with costly advertisements, livestreaming is more efficient in attracting tourists, he said.