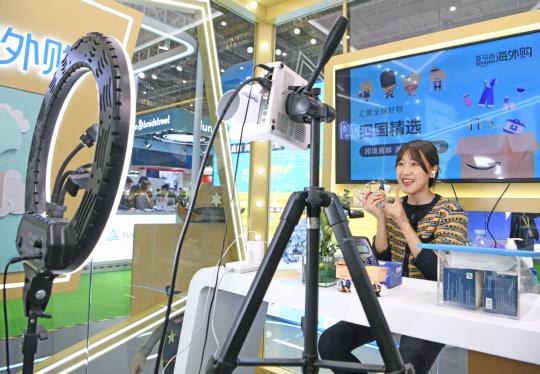 A livestreamer at work at the booth of Amazon during an expo in Shanghai. (CHEN BIN/FOR CHINA DAILY)

Livestreaming is being mooted as one of the potential solutions for the dearth of job opportunities, especially for young college graduates, as the sector continues to evolve and grow as a result of new trends created by the pandemic.

One of the most successful examples has been New Oriental, an extracurricular education provider that was caught in the crosshairs when the central government introduced the "double reduction" policy aimed at reducing the extra burdens placed upon primary and middle school students last year.

The company has begun to recoup some of its losses by pivoting toward livestreaming and selling products like agricultural produce online. The company's livestreams went viral after one of its former English teachers-turned-livestream hosts started to teach viewers useful English phrases while selling products.

Dongfang Zhenxuan, or Oriental Select, has attracted millions of views and made billions in sales.

The latest figures from Huitun, a third-party data analysis platform, show that as of the end of August, Oriental Select's total sales revenue over the past three months was 2 billion yuan ($284 million), with daily sales revenue exceeding 22 million yuan.

It's a demonstration of the ever-changing nature of employment, as just a few years ago the job of livestream host didn't exist. However, it is an opportunity that people, especially the young, have welcomed with open arms.

"I loved being a livestreamer and I hope I will get another opportunity someday," said Yan Zaifang, a 21-year-old from Yunnan province.

Yan, who is now a real estate agent, worked as a livestreamer in Beijing in 2019. "The livestreamers who are eloquent and were able to deal with whatever issues they faced during livestreams were my idols. I expected the job to be challenging, so why not give it a try while I am still young?"

Yan said that the job was not easy in the beginning, but he did get a sense of achievement when viewers placed orders online.

"The industry is promising, and is growing to be one of the main shopping methods. Many brick-and-mortar shops are going online due to the pandemic," he said.

Yan is not alone. Other young people, especially college graduates, have demonstrated a preference for becoming livestreamers.

A recent report by MyCOS, an education consulting and research institute in Beijing, shows that 4.2 percent of the college students surveyed who graduated in 2021 took flexible jobs, 30 percent of whom work as livestreamers or in new media.

Another report by recruitment platform Zhaopin also points to the industry's boom. The platform said that in the third quarter of 2021, the number of job seekers rose by 46.7 percent year-on-year, while the number of college graduates expressing an interest in working in livestreaming increased by nearly 70 percent in the same period.

Figures from Tianyancha, a corporate information provider, show there are 583,000 companies with livestreaming businesses in China. Among them, 54.7 percent have been set up in the past year.