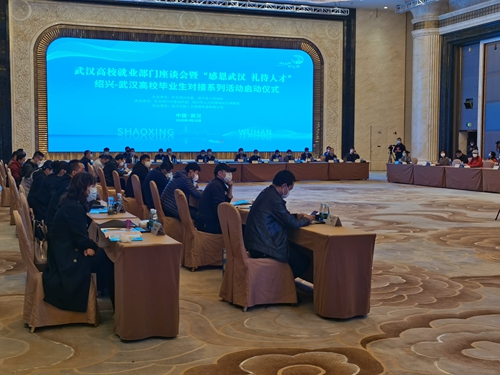 We want to send a heartwarming signal to new Wuhan university graduates during this difficult time as the city just lifted its outbound restrictions on April 8, Luo Jihong, vice director of Bureau of Shaoxing Human Resources and Social Security, told the Global Times on Friday. He added that many Wuhan university teachers attended the special Shaoxing event and expressed their appreciation for Shaoxing's move.

Luo and his colleagues arrived in Wuhan on Thursday. He felt Wuhan was worth choosing as the first recruitment stop as Hubei Province has roughly 450,000 new university graduates. "Due to the outbreak, the city faces increased stress to provide jobs to these graduates," Luo noted.

A total of 495 enterprises in key industries in Shaoxing, have provided roughly 8,000 jobs for new Wuhan university graduates, according to the Bureau of Shaoxing Human Resources and Social Security. The average annual salary of these positions exceeds 90,000 yuan ($12,789).

Shaoxing is also in need of talent to meet its rapid development, Chen Shida, a senior researcher from the Zhejiang Institution of Talent Development, told the Global Times on Friday, adding that each year many Wuhan graduates come to Zhejiang to seek employment opportunities.

"In order to allay the concerns of recent Hubei graduates, we also welcome and encourage them to work in Shaoxing," Luo said. They will enjoy an extra 20 percent settlement subsidy, he added.

As a developed city, Shaoxing is also eager for talent, and it will continue its recruitment tour in cities such as Shanghai, Chengdu, Nanjing and Hangzhou, Luo said. Last year, Shaoxing attracted about 100,000 college graduates from other regions.