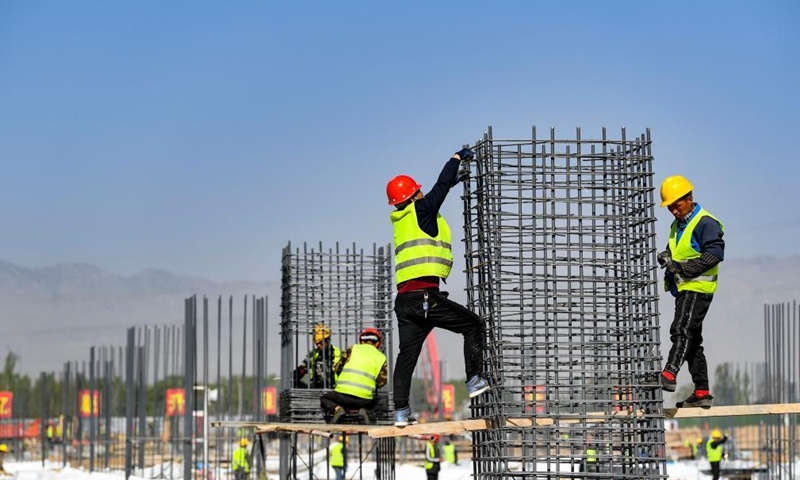 Workers are busy at the construction site of a smart factory in the economic and technological development zone in Yinchuan City, northwest China's Ningxia Hui Autonomous Region, May 1, 2021. (Photo: Xinhua)

China's local governments issued 1.7 trillion yuan ($264.5 billion) worth of bonds as of Sunday, which analysts said reflects the continuity of the proactive fiscal policy to support post-pandemic economic recovery.

With outstanding local government debt projected to reach 30 trillion yuan at the end of this year, analysts have warned of rapid debt growth risks, such as through implicit borrowing - that may increase the pressure on local governments to meet debt repayments.

New borrowing is mainly being invested in sectors including healthcare, education, transport infrastructure, and other public welfare projects.

The pace and scale of new bond issues are basically in line with expectations and reflect the continuity of the country's proactive fiscal policy for a stable economic recovery, Dong Dengxin, director of the Finance and Securities Institute at the Wuhan University of Science and Technology, told the Global Times.

He projected that China's outstanding local government bond issuances may exceed 30 trillion yuan at the end of 2021.

With strict quotas and use limits, most of China's local government debt has been used in projects to raise living standards and serves as strong guidance and leverage for driving up private investment. Local government bond issues are necessary to boost economic growth.

Against the backdrop of the pandemic and continuous downward pressure on economic growth, China pursued a proactive fiscal policy in 2020. The ceiling for new local government bonds was raised to 4.73 trillion yuan last year.

"Yields on many of the projects invested in by local governments are not optimal, adding to the pressure of debt repayments, especially with the approach of the peak of local government bonds that are due in 2021," Xi Junyang, a professor at the Shanghai University of Finance and Economics, told the Global Times on Monday.

Dong mentioned potential risks brought by a large amount of implicit local government borrowing, adding that the debt pressure of public departments, including banks and state-owned enterprises, is still heavy.

Finance Minister Liu Kun wrote in an article published in the Economic Daily on Thursday that the authorities will step up efforts to contain implicit local government debt levels.

No new projects will be allowed through implicit borrowing. Meanwhile, bond defaults will be dealt with in a market-oriented and legal fashion to prevent systemic risks, according to the article.