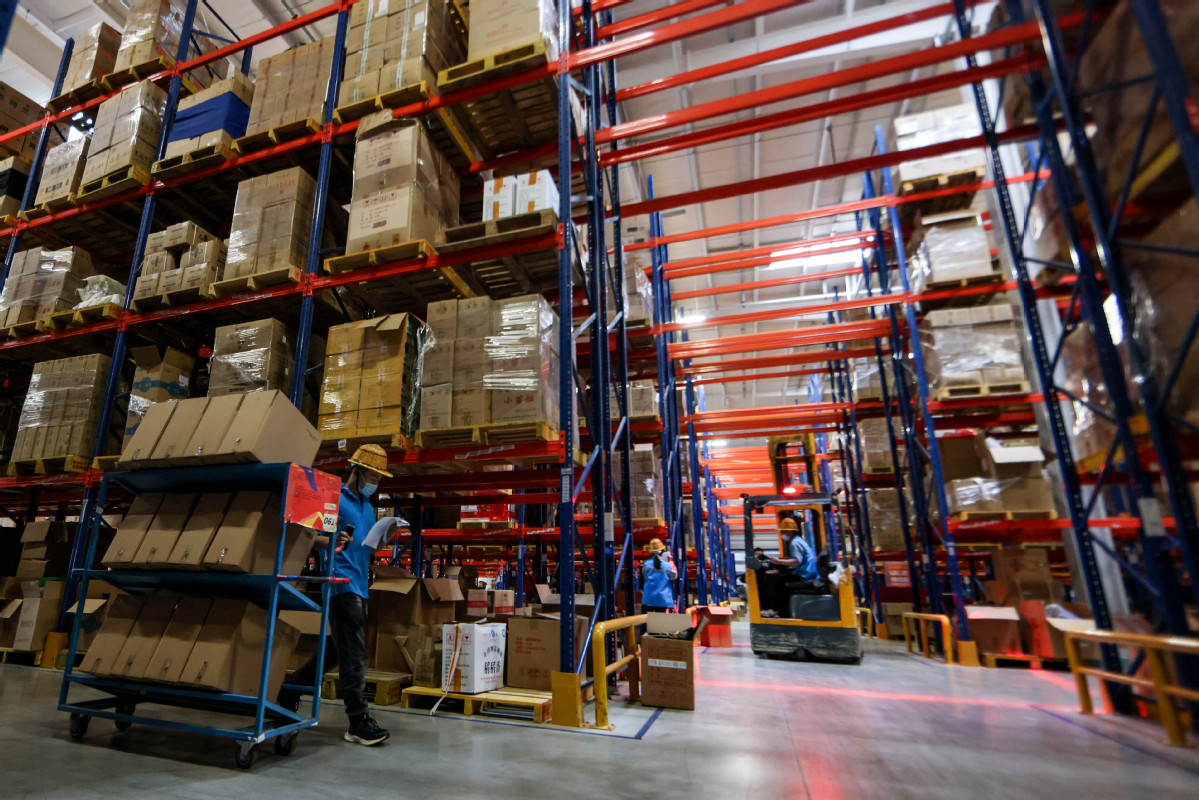 The logistics sector, a long-term economic pillar that is thriving in China, will retain its upward momentum, facilitating global trade and investment activities despite challenges threatening the world's economic recovery, according to experts and corporate executives.

With an improved network, strengthened service capacity and deepened international cooperation, they said China has built a large-scale, comprehensive transportation network to connect the country with the rest of the world during the past decade, boosting the logistics capability of the world's second-largest economy and the biggest goods trader.

By the end of last year, the total length of China's railways and highways had grown by 1.1 million kilometers compared with 2012, equivalent to circumnavigating the equator about 27.5 times, according to the Ministry of Transport.

On average, ports reported a total of some 69,000 shipping arrivals and departures nationwide on a daily basis last year, while airports saw some 26,800 takeoffs and landings every day, the ministry's data show.

As of the end of June, the corridor, which was launched in 2017, connected 14 provincial-level regions in China with more than 310 ports in 107 countries and regions worldwide. It saw 379,000 twenty-foot equivalent unit, or TEU, containers transported by freight trains from January to June, a year-on-year rise of 33.4 percent, according to China State Railway Group Co, the national railway operator.

This new development pattern takes the domestic market as the mainstay while letting domestic and foreign markets reinforce each other.

Lu's institute is responsible to the National Development and Reform Commission, or NDRC, the nation's top economic regulator.

In the first eight months of this year, the number of China-Europe freight train journeys rose by 5 percent year-on-year to 10,575. These trains transported a total of 1.02 million TEUs of goods, a rise of 6 percent from a year ago, according to China State Railway Group Co.

As of the end of July, the rail network covered most provincial-level regions in China and also reached 196 cities in 24 European countries, according to the NDRC. The network has also shown resilience during the COVID-19 pandemic — injecting vitality into global trade.

Zhou Zhicheng, a researcher at the China Federation of Logistics and Purchasing, said that although supply chains in the Yangtze River Delta region were disrupted by the pandemic in the second quarter of this year, China quickly solved the logistics bottleneck, remaining a growth engine for global trade and multinationals.

In the first eight months of this year, the foreign trade value of foreign-funded companies in China rose by 2.4 percent year-on-year to 9.17 trillion yuan ($1.28 trillion), accounting for 33.6 percent of the country's total trade value, according to the General Administration of Customs.

Roy Yang, head of smart buildings and smart power divisions for China at Swiss technology company ABB Group, said that supported by China's efficient logistics and supply chain, his company exports products manufactured from its plants in the country to more than 60 nations and regions.

Meanwhile, to better compete with rivals such as France's CMA CGM and Mediterranean Shipping Co, which is based in Geneva, China COSCO Shipping Corp said in June it will deepen integration of its container shipping unit and business terminal segment this year. It will also continuously reinforce business model innovation via digital technologies, and build a "new ecology" of smart and green shipping. COSCO is the nation's largest shipping company by sales revenue.

After launching a number of services since the start of this year, DHL Express, the German express service provider, said it will continue to expand and enhance its logistics infrastructure in China.

Wu Dongming, CEO of DHL Express China, said the company has undertaken and delivered several projects, including building a regional hub in Chengdu, Sichuan province, a gateway in Zhengzhou, Henan province, and launching a new air route between Shenzhen, Guangdong province, and the German city of Leipzig.

He said the company will continue to promote trade flow to and from China with the rest of the world through its logistics services. In particular, it will use its resources to promote trade flows generated from booming cross-border e-commerce business between China and its trade partners.

Danish shipping and logistics service provider A.P. Moller-Maersk plans to add three new B767-300 freighters to its air cargo service between China and the United States by the end of this year.

Wang Xianjin, vice-president of the China Academy of Transportation Sciences, which is a part of the Ministry of Transport, said that building a modernized circulation network can be a new opportunity for logistics companies, and will push China to accelerate the establishment of a unified domestic market that is highly efficient, rules-based, open and fair for competition.

He added that logistics is important in connecting production and consumption.