Three scooter companies, Dott, Lime and Tier, have been selected to offer rentals for up to 12 months as part of the pilot program in the country's capital, which will enable anyone who holds a driving license and is over the age of 18 to hire an e-scooter for short trips around the city's busy streets.

The rules of the road for e-scooters are similar to those for cyclists – helmets are recommended but not mandatory and riding on the pavement is not allowed.

"This is the only way you can participate in e-scooters legally in the country at the moment," said Georgia Yexley, head of UK & Ireland Cities at Tier, one of Europe's leading e-scooter operators.

"What we would like to see is for e-scooters to become part of the environment and transport mix, to get people out of private cars and this is another fun way to do that," she said. 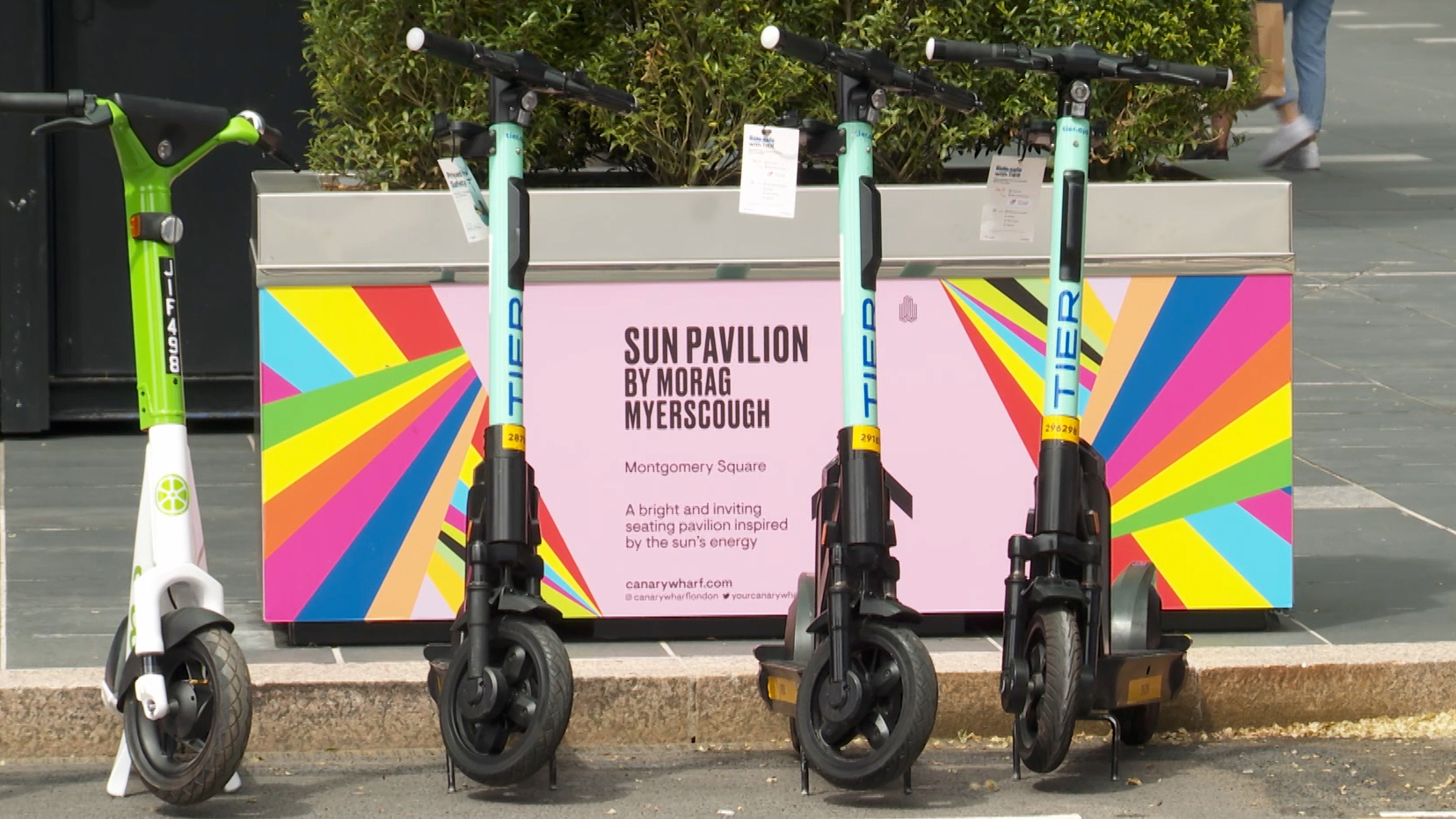 Pedestrians will initially be able to hire e-scooters from Canary Wharf and the western boroughs of Greater London. More boroughs will follow. (Photo: CGTN)

In the UK, the use of personal electric-powered scooters in public spaces is illegal, but under the rental scheme, people will be allowed to ride them on roads and in cycle lanes in the areas taking part in the trial.

Similar trials are taking place in 40 towns and cities around the country as the government considers whether to fully legalize the two-wheelers on UK roads as part of the shift to sustainable travel.

"E-scooters are an important part of the green recovery and returning to the high street and life in London in the next few months … so we are looking at the metrics around carbon saving, air pollution and going deep into the research to understand how this adds benefit to our communities," said Yexley. 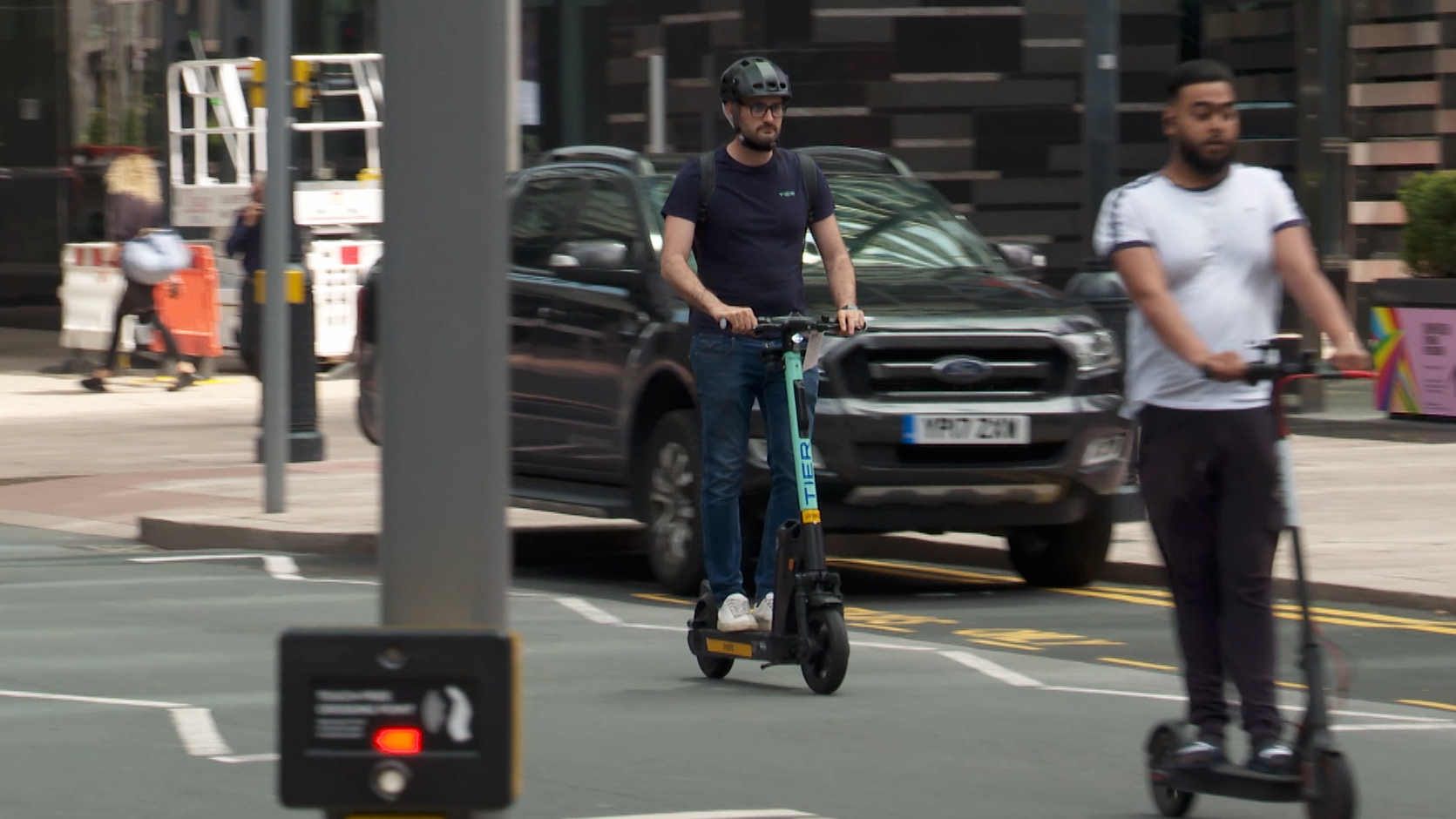 There are still unresolved safety concerns around the use of e-scooters on the road. (Photo: CGTN)

With a top speed of 20 km per hour, the ride is less of a whizz and more of an amble. But these scooters have been made to strict safety standards: they are sturdy, with heavier tires to absorb potholes and bumps in the road and they are crammed with tech, such as a tracker that disables the motor if riders stray out of the trial zone.

Around Europe, lockdowns have driven new citywide policies, with an increased focus on micro-mobility – which covers e-scooters, e-bikes, e-mopeds and e-skateboards.

Consultancy firm McKinsey notes that Paris will convert 50 km of road and plans to invest $325m to update its cycle network. Brussels is turning 40 km of car lanes into cycle paths And in Milan, 35 km previously used for cars will be adapted to walking and cycling.

If the UK e-scooter trials are deemed a success, there could be more investment in infrastructure to support them.

For now, those privately owned e-scooters already out and about are illegal. And there has been criticism about riders traveling too fast, riding on pavements, ignoring red lights and a spate of drink-driving arrests.

But transport chiefs hope the hire scheme will help to bring e-scooters back within the law, as the drive towards greener forms of transport accelerates.