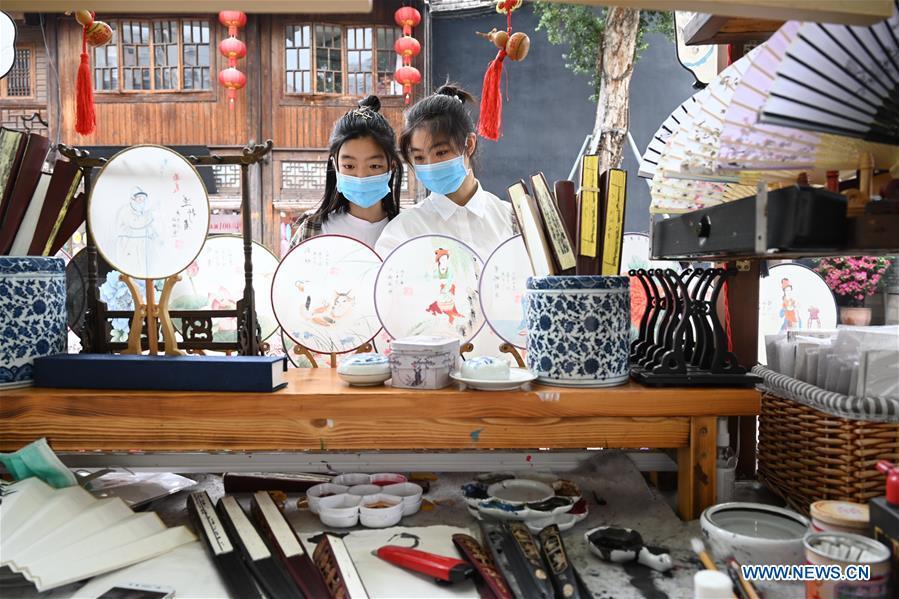 Customers are eligible to receive a shopping voucher worth eight yuan (about $1.12) at half price. The steep discounts drove up A'wen's orders during the five-day Labor Day holiday that ended Tuesday, expanding six times compared with the pre-holiday period.

As the novel coronavirus epidemic in China becomes more subdued, the country is trying to get consumption back on its feet, with the majority of shopping malls and restaurants reopening and a large number of consumers returning to stores and cafes during the holiday.

Shanghai, for instance, launched a shopping festival to spur pent-up spending. A'wen was among many merchants from high street to main street to receive a much-needed revenue boost.

The shopping spree runs from May Day holiday to the end of June and features more than 700 online and offline activities. Merchants are opening up their wallets, offering inviting discounts and dishing out shopping coupons to spur spending.

Combined sales in the city's online and offline channels hit 15.68 billion yuan in the 24 hours following the launch event on Monday evening, data from China UnionPay, Alipay and WeChat showed.

Catering, retailing and tourism were among the key sectors reignited during this year's holiday, which saw signs of a rebound and indicated the country's unabated economic vitality and flourishing consumption market.

Hotpot, crayfish, dessert and milk tea regained popularity among foodies around the country. The first three days of the holiday witnessed residents in Wuhan, the city once locked down due to the epidemic, spend noticeably more on late-night snacks.

Particularly, people are paying more attention to dining hygiene during the holiday by enjoying separate meals when dining out instead of sharing dishes with others. Xiamen, Jinan and other tourist destinations in China also issued guidelines on separate meals.

The stay-at-home economy also rose against the headwind of the virus. Consumers spent big as they redecorated their homes and improved their cooking skills. Transactions of major decoration materials doubled year on year from May 1 to 3, while that of domestic appliances and cookware skyrocketed by 196 percent and 89 percent, respectively, data from Alibaba's online marketplace Tmall showed.

Although outbound travel is discouraged, people were still busy shopping around the world. Tmall recorded a year-on-year expansion of 41 percent in sales of imported goods during the first three days of the holiday.

In addition, people enhanced their awareness of safety and health. The sales of masks on Tmall soared by 567 percent year on year, and that of disinfection products more than doubled.

After a relaxation of travel restrictions amid dwindling COVID-19 cases in the country, China saw nearly 115 million domestic tourist trips during the holiday, and domestic tourism revenue generated during the period totaled 47.56 billion yuan, according to the Ministry of Culture and Tourism.

Tourists are shifting their focus from outbound tours to travel near their homes during this holiday, and they are looking for a better and safer travel experience, said Wang Xiaosong, chairman of online travel agency Lvmama.com.

Authorities have urged the safe and orderly reopening of tourist sites across the country, stressing that efforts should be made to control passenger flows, prevent the gatherings of crowds and implement reservation systems.

The emergence of pent-up consumption during the holiday was a result of various consumption stimuli and promotion activities launched by the government, analysts said, estimating that the recovery of China's huge consumer market will pick up as policies gradually take effect and more favorable policies follow.

Chinese authorities emphasized during a meeting in April the need to expand domestic demand and the necessity to release the potential of consumption by stimulating consumer spending and increasing public spending as appropriate.

Holiday promotions were stronger than ever before this year partly thanks to the combination of online and offline pro-consumption approaches, and consumers embraced the fresh consumption mode in which they received digital coupons and shopped at physical stores, said Guan Lixin, a researcher with the Chinese Academy of International Trade and Economic Cooperation.

However, the gradual recovery of consumption entails more detailed policies to boost consumers' confidence, smooth the consumption-driven economic cycle and scale up domestic demand's contribution to the economy, Guan noted.