By He Weiwen | Global Times

Despite the signing of the phase one trade deal, US pressure on Chinese technology companies including Huawei has not lifted. The US Commerce Department sent regulations to the Office of Management and Budget that would restrict US companies' sales to Huawei from their overseas facilities, according to a Wall Street Journal report citing people familiar with the matter. 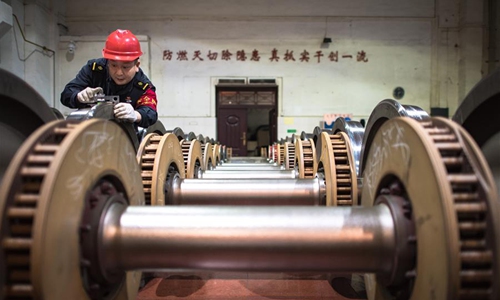 The US has repeatedly pushed European countries including the UK and Germany not to adopt Huawei devices in 5G construction.

The World Economic Forum in Davos, Switzerland is a multilateral platform, not an ideal channel to communicate technology competition between China and the US. Nevertheless, the forum will discuss a series of major issues, including technology ones - proposing a fourth industrial revolution that can benefit all humanity.

The US is blockading Huawei and even extending its jurisdiction to companies outside its territory. The Trump administration has reportedly pressured the Netherlands to cancel semiconductor lithography machine sales to China. The US banned Huawei from buying products made from 25 percent or more of US-originated technologies. Now the ratio may drop to 10 percent to stop Taiwan Semiconductor Manufacturing Company from supplying Huawei. It is clear that the US wants to have its say on tech-related trade even if there is only a tiny US involvement. If the US' blockade on the Chinese company continues, the current positive atmosphere will soon turn sour.

There is still a long way to go before China and the US can meet half way. The phase one trade deal may mark a temporary cease-fire, but it cannot solve other problems. There is still the possibility that the rivalry on technology and strategy will escalate. The deal did not loose up restrictions on investment. Chinese investment in the US significant dropped last year mainly due to the limitation in technology and acquisition on the US side.

China and the US have made a breakthrough in trade, but it is so far only on paper. Both sides should speed up implementation of the deal. We must remember that the phase one trade deal leaves some deep-level problems untouched.

The best way to put an end to the unresolved technology issues is developing endurance and strength.

For instance, the US ban on Huawei has put American companies, which rely on sales to Huawei, in danger. China needs new technology breakthroughs that are not dependent on the US. When it comes down to basics, it is still a competition of strength.

The fourth industrial revolution is the pursuit of all humanity, which requires international cooperation. Any country that tries to stop it will eventually shoot itself in the foot. Last year, US President Donald Trump advocated US companies to withdraw from China. Few companies did so. It proves that it is impossible for China and the US to decouple.

The US should abandon its Cold War mind-set where it is trying to overwhelm China with a technology blockade. The two countries should return to cooperation, which is mutually beneficial for technology companies and the technological development of both countries.  China looks forward to a worldwide cooperation that respects globalization and each country's core interests.

The author is a former economic and commercial counselor at the Chinese Consulates General in San Francisco and New York.