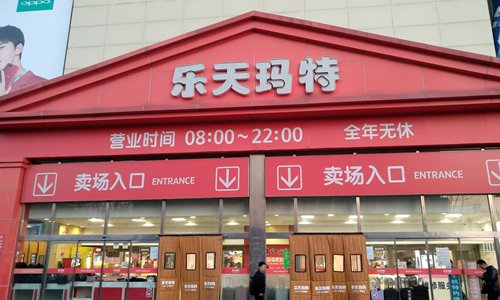 View of a Lotte Mart supermarket in Beijing (Photo: VCG)

Among the outlets, 10 are large ones and the rest are medium-sized, a public relations (PR) representative of Lotte told the Global Times. The sale means that there will no longer be any Lotte Mart stores in Beijing.

The Lotte PR also disclosed that Lotte Mart will sell 87.38 percent of its stake in Beijing stores to Wumei.

Including the Beijing stores, Lotte Mart has 110 stores on the Chinese mainland, the company said.

The sales show that the South Korean retailer is facing reality after grappling with a tough business environment in the mainland. Lotte bore the brunt of bilateral political friction stemming from a February 2017 land-swap deal Lotte signed with the South Korean government. Under that agreement, the company provided a golf course as the site for the deployment of a US missile shield system, a move that triggered protests from China.

In the past, Lotte Mart repeatedly told the Global Times that it wouldn't abandon the mainland market.

The Seoul-based Aju Business Daily reported on April 4 that Lotte Group, the parent company of Lotte Mart, saw overseas sales revenue slump 7.8 percent on a yearly basis in 2017, mostly because of bilateral tensions between China and South Korea.

Chen Yuefeng, founder of retail news website lingshouke.cn, said that Lotte Mart was never able to recover from the impact of the missile dispute, with setbacks like large-scale store closedowns in early 2017.

"To be honest, I think domestic consumers' patriotic emotion against Lotte Mart eased a lot with the passage of time. However, Lotte Mart needs external support, especially from mainland local governments, to reinvigorate its business, but it can't get that," he said.

According to Chen, Lotte Mart had some advantages, like selling South Korean products that are very popular among Chinese consumers, a comfortable shopping environment and convenient store locations.

"Some of Lotte Mart's branches were doing quite well in the mainland market. Lotte Mart would not have sold its stores in the mainland except for the impact on its businesses that were caused by changes in the relationship between China and South Korea," Chen told the Global Times.

But Chen also said that Lotte Mart also needed to update its business in the mainland to focus more on e-commerce.

Apart from Lotte Mart, many other South Korean companies' businesses were also slumping in the mainland in recent months. For example, mobile phone brand Samsung's market share fell to just 0.8 percent in terms of shipments during the fourth quarter of 2017, compared with 7.6 percent in 2015, data from Strategy Analytics showed on April 4.