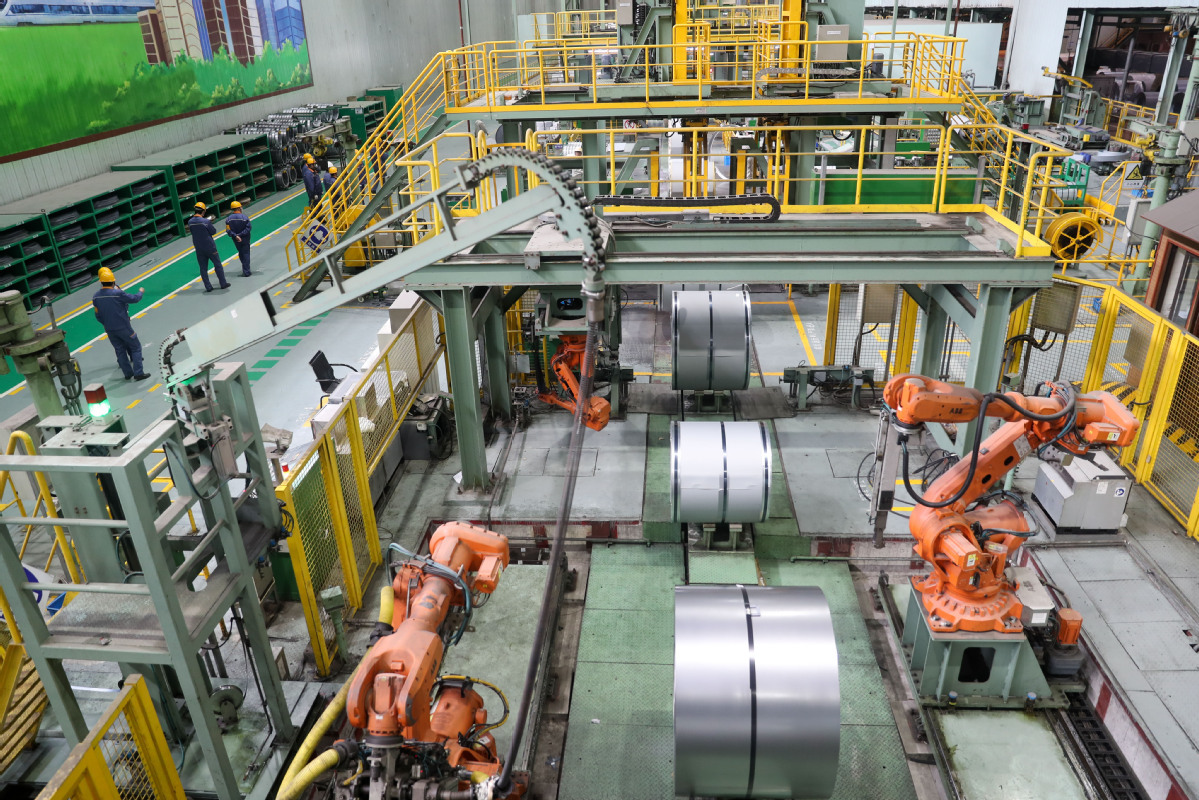 As China pursues cleaner, low-carbon and more efficient steel sector development, analysts expect multinational companies will carry out deeper and higher-quality cooperation in the Chinese market this year despite the impact of the COVID-19 pandemic.

"China has led the global demand recovery in 2020, while overseas demand was hurt by COVID-19," said Zhu Yi, a senior analyst for metals and mining at Bloomberg Intelligence.

"Exports from China could increase this year as overseas demand recovers, thus boosting China's output of metals and imports of raw materials from overseas miners such as Rio Tinto, BHP and Vale," Zhu said.

According to fourth quarter production results released by Rio Tinto Group Plc in January, the industrial sector has recovered in China and is now at pre-COVID levels due to the country's effective stimulus measures.

Exports from the country also continue to rise with the global economic recovery, and a policy shift to promote domestic investment and consumption is supportive of commodity demand, it said.

According to the Australian global mining giant, iron ore prices rose significantly in the second half on the back of tightened market fundamentals, and China's buying remains robust despite ongoing localized impact from COVID-19 in some regions.

China's crude steel output in 2020 exceeded 1 billion metric tons for the first time with an increase of 5.2 percent year-on-year, said the National Bureau of Statistics on Jan 18. This is the fifth consecutive year that China hit a record in crude steel output.

Zhu expects China's crude steel output will fall in 2021 amid efforts to reduce carbon emissions despite factors including a surge in overseas steel demand and economic stimulus measures that might lead to China increasing its steel output in 2021.

"China's growth of crude steel output could slow down to 1.5 percent year-on-year this year, compared with 5.2 percent in 2020, as downstream demand slows down after the robust recovery since the second quarter last year," she said.

The Ministry of Industry and Information Technology released a draft five-year plan for public comment in January on the high-quality development of China's steel industry, calling for more use of scrap metals, expanded electric arc furnace capacity and more Chinese ownership of iron ore supplies.

China, which has taken solid steps in recent years to cut overcapacity in the energy-consuming steel sector, has met its target of reducing steel output by 150 million tons ahead of schedule during the 2016-20 period.

Multinational corporations are also actively conducting cooperation with Chinese companies and institutes, investing heavily in research and development projects related to carbon emissions reduction associated with existing steelmaking processes and developing technologies for the future of steelmaking to support the transition to a low-carbon economy.

Rio Tinto earlier promised to invest $10 million with the world's largest steel producer China Baowu Steel Group in December, over the next two years in low-carbon steelmaking projects and research, followed by a renewed partnership agreement with Tsinghua University and a further commitment of 30 million yuan ($4.5 million) over the next five years in November to support research projects at the Tsinghua-Rio Tinto Joint Research Centre for Resources, Energy and Sustainable Development.

As one of the world's top iron ore miners, Rio Tinto stepped into China's iron ore port sector for the first time in 2019 in Rizhao, Shandong province and Caofeidian, Hebei province. The company said it will continue to ramp up its port sales in China, with 5.5 million metric tons of sales in 2020 including 1.8 million in the fourth quarter.

"Global metal miners and producers are focusing on reducing emissions along the value chain, and the partnership between Rio Tinto and Chinese companies and institutes could help promote the low-carbon steelmaking process to make steel mills cleaner," Zhu said.

Zhu added that the Chinese government has been implementing strict environmental control measures on the steel industry to cut pollution and mills have become much cleaner.

"China, which has successfully implemented strict capacity control measures to alleviate overcapacity in the steel industry, is working to increase the use of electric arc furnaces to produce steel, as currently only about 10 percent of crude steel is produced from electric furnaces with the remainder from blast furnaces," she said.

"The government is encouraging the use of electric arc furnaces in order to reduce China's reliance on imported iron ore and increase the usage of scrap steel as raw materials, which is more environmentally friendly. The supply shortage of scrap steel has been one of the main reasons for China's lower usage of electric arc furnaces－currently 10 percent compared with 40 percent in Europe and 70 percent in the United States in 2019."

But scrap steel resources will increase amid China's growing economy and crude steel consumption, she added.

Li Xinchuang, the institute's chief engineer, predicts that China's steel demand will be 991 million tons in 2021, a year-on-year increase of 1 percent, adding that the steel industry has played an important role in supporting the rapid recovery of China's macroeconomy.

On the other hand, the Chinese government's push for a more environmentally friendly and self-sufficient steel industry faces significant hurdles to meeting proposed targets, starting with crude steel output cuts this year.

Luo Tiejun, vice-chairman of the China Iron and Steel Association, said the country's environment can no longer support continued capacity expansion of domestic steel production. With the government pledging to strive to peak carbon dioxide emissions by 2030 and achieve carbon neutrality by 2060－a boldly responsible move to curb global warming－carbon emissions will be one of the major restraints on the development of the steel sector.

According to UBS bank analysts, steel export demand continues to normalize, growing 36 percent in December over the previous month to 3.5 million tons. Iron ore port stocks have also slipped over the fourth quarter of 2020 to 124.25 million tons as of Jan 11.

China has put in place a green manufacturing system, with 2,121 green factories and 171 green industrial parks built over the past five years.

Minister of Industry and Information Technology Xiao Yaqing said at a work conference in December that China will resolutely cut crude steel output and ensure it falls year-on-year in 2021, and efforts will be made to promote low-carbon industrial development and green manufacturing this year.

China will make more efforts to cut carbon emissions in the industrial sector and roll out plans for key sectors to achieve the goal of peaking carbon emissions, he said.