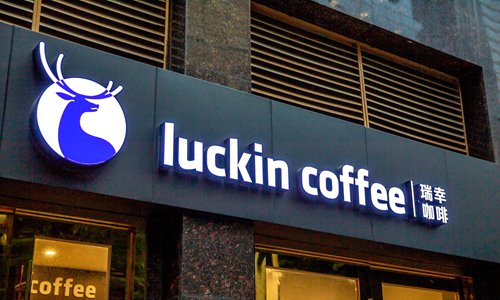 A view of Luckin Coffe in Guangzhou, capital of south China's Guangdong Province in December. (Photo: VCG)
Luckin Coffee apologized Sunday regarding the fallout from its sales fraud on Monday, and its senior executives involved in the incident have been suspended, pending the investigation by its special committee, according to the company statement. Meanwhile, the start-up will resume normal operations in its stores.

According to Luckin, the company’s board has set up a special committee, and a third party agency has been entrusted with a “thorough investigation” of the incident. The notice said that the company will take all remediation necessary and “would not shun away from the issues brought about by the fallout.”

On Friday the company admitted to the accusation of fabricating transactions from the US short-selling firm Muddy Waters. Despite the scandal that has caused the company’s stock to topple over 80 percent on Friday, the company will still maintain normal operations, according to the notice, including staff management and business of its off-line stores.

Founded in 2017, the company is usually seen as China’s Starbucks challenger, and raised $561 million in its initial public offering in the US back in 2019. In mid-January, the company’s stock prices nosedived almost 50 percent from its initial price to $51.38.

As of Sunday investors have announced class action lawsuits to be filed against the company. RM Law, a law firm based in the US has announced a class action suit against Luckin on Friday, and HAO Law Firm, which is based in Beijing, has also been reached by many investors regarding litigation claims on a class action basis.