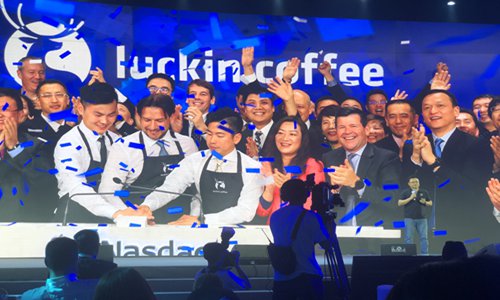 Starbucks' Chinese challenger Luckin Coffee Inc on Monday announced its expansion into the tea market by launching a dozen summer tea beverages in 3,000 stores across the country.Luckin is eyeing a bigger share of the domestic beverage market by diversifying its product line to tap the spending power of young consumers in China, after it was listed on the NASDAQ on May 17.Industry insiders said the fast growth of the start-up will meet Chinese consumers' spending demands and will also ramp up competition among domestic tea beverage makers, such as Chinese milk tea shop Heytea.After fast expansion in the past 20 months, Luckin has operated in 40 cities in China, Guo Jinyi, co-founder of Luckin, said at a company-hosted event in Beijing on Monday.There is some overlap of Chinese consumers' desire for coffee and tea, but tea drinking has become a new lifestyle choice for many young people, Guo said, noting that "entering the tea market meets Luckin's development strategy."The Chinese tea beverage market faces some problems such as uneven quality of products, poor management of the supply chain and sanitation issues, Guo said, noting that Luckin will try to address such challenges through efforts such as inviting experts to advise and supervise, and by introducing high-quality and safe materials.The number of Chinese tea beverage stores grew at its fastest from 2017 to 2018, with a compound annual growth rate of 14 percent to 48.5 billion yuan ($7.05 billion) during the period, the Xinhua News Agency reported, citing an industry report.   Luckin's joining the sector will affect the competitive landscape of the current tea market, industry insiders said.Luckin's quick growth is an evidence of the consumption upgrade in the Chinese market, and the Chinese brand is aiming to nurture a image of being fashionable and meshing with the fast-paced life of young consumers in cities, Wang Danqing, a partner with Beijing-based ACME consultancy, told the Global Times on Monday.Luckin's expansion was "stunning," as it only took 17 months to list on the NASDAQ, much faster than some US firms, which industry insiders regard it as "the quickest IPO in history."Luckin started selling coffee and will likely expand into more areas, such as O2O services, which will intensify competition with its foreign rivals in the Chinese market like Starbucks, Liu Dingding, a Beijing-based industry analyst, told the Global Times on Monday on the sidelines of the Luckin event.Luckin's business model differs from Starbucks', as the former features fast online services while the latter focuses more on the physical experience, Liu said, noting that although fierce competition persists, the two firms will co-exist in the domestic and global coffee market. Luckin invested heavily in its coffee marketing strategy to take on Starbucks, Liu said.In a bid to push back against its brash competitor, Starbucks launched new summer beverages to woo domestic customers in late April.