Luxury hotels halt provision of six items for the bathroom 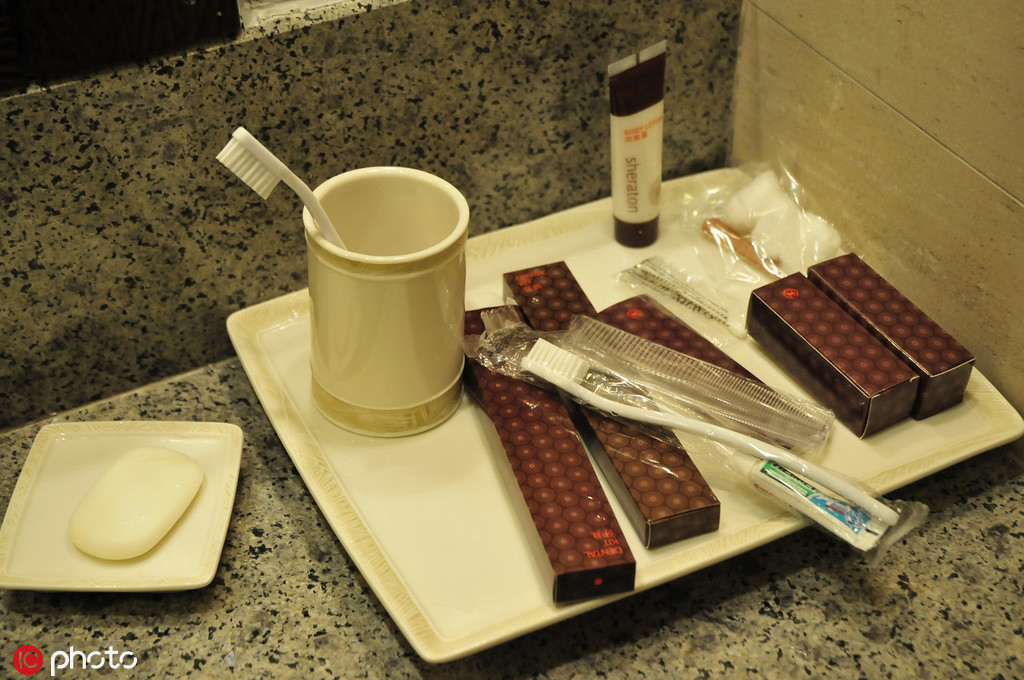 Guests at Shanghai's luxury hotels, which charge as much as 6,000 yuan ($872) a night for a room, are now expected to bring their own toothbrushes, combs and razors, among other items.

As a part of the municipality's first regulation on waste treatment, new rules require all hotels and lodging houses to stop providing items such as toothbrushes, combs, razors, nail polishers, shoe wipers and loofahs in rooms. However, guests can still ask for any one of these items from hotel service centers.

If they violate the rules, hotels or business providers are subject to fines ranging from 500 to 5,000 yuan.

Gu Jianbin, market regulation department director at the Shanghai Municipal Administration of Culture and Tourism, which was responsible for drafting the rules, said, "Contrary to the country's regulation on hotel ratings, which specifically lists what a hotel should offer in order to qualify for five stars, this is the first time a regulation has been drawn up to state what a hotel should not provide, to protect the environment."

China passed its first regulation on the qualifications and classifications needed for hotel ratings in 1988 after opening up to the world and receiving an increasing number of overseas tourists. The regulation has been updated and adjusted several times, the most recent being in 2011.

"The new rule is also about getting Shanghai, if not the country as a whole, connected and up to speed with the international situation, in which climate change and ecological civilization are hot issues," Gu said.

The six items primarily selected for exclusion from room amenities should meet two criteria: they can be recycled for use in daily life and be easy to carry while traveling.

"Shower gels or shampoos are not included because flight restrictions have made it difficult for travelers to carry them around, while cotton pads are not on the list because they are disposable after one use. The rule is about protecting the environment without unduly compromising travelers' convenience," Gu added.

Shanghai, one of the most competitive hospitality markets, now boasts nearly 7,000 hotels and hostels, providing a total of 800,000 beds. The average room occupancy rate is 60 to 70 percent, according to the municipal government.

The rule is likely to be expanded, both in terms of cities that will adopt it and the number of amenities to be included, Gu said.

Jin Yiying, a professor at Tsinghua University's Environment School in Beijing, said the regulation might have an impact beyond the number of guest stays at Shanghai hotels every year.

"It could have a subtle yet significant influence where guests gradually change their habits and decide to bring their own toothbrushes or combs wherever they go," Jin said.

It is estimated that more than 70 percent of bars of soap in hotels are discarded after just one stay. This means that some 400,000 metric tons of soap are wasted annually from the country's more than 440,000 hotel and lodging providers.

Jin added: "The new waste management regulation in Shanghai has sparked heated discussions about how the city could become a better place by segregating the 9 million tons of trash produced every year. But this part of the regulation makes a contribution to the environment by reducing the amount of waste produced in the first place."

Speaking about Shanghai's new regulation on waste management and provision of hotel amenities, Janice Lao, director of group corporate responsibility and sustainability at Hong Kong and Shanghai Hotels, the parent company of luxury brand Peninsula, said: "Shanghai is so advanced. It's as if it has left other cosmopolitan cities behind. It also says a lot about China's ambition."

Lao, an environmental scientist and development economist who graduated from the University of Oxford in the United Kingdom, has recently been listed by Forbes magazine as one of the world's top female sustainability leaders. She joined HSH's sustainability project in 2017.

HSH, one of the world's oldest hospitality companies, increased its waste diversion rate to more than 50 percent by last year. The rate at properties in Beijing reached 80 percent, as they recycled and donated 10 tons of partially used bars of soap and bathroom accessories to those in need, as part of other sustainable luxury initiatives to be achieved by next year.

Addressing the perceived conflict between the traditional concept of luxury and the principles of sustainability, Lao said: "The old concept of luxury is about putting everything on the table for guests to choose from, which I call 'lazy luxury'. I just give you everything and not find out who you are, hoping statistically that I will get it right. But the way sustainable luxury works is to be observant, to personalize and invest in a level of thinking.

In 2011, the group, which now has a presence in 10 cities worldwide, became the first hospitality brand to officially ban shark fin from its menu from the start of 2012. The move was soon followed by many other companies.

"It's more evolution than revolution. Like the shark fin ban, we tend to share the facts and let the guests make the decision," Lao said.

"China will definitely lead the world on many environmental issues ... and it is still a major supplier to the world economy. So you can imagine its power to move markets and change behavior when the country decides to go green."