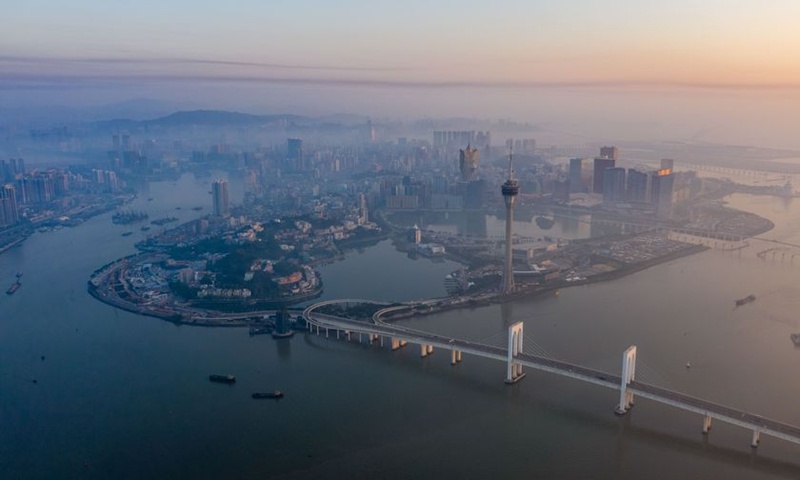 Macao will seek more development opportunity in the country's 14th Five-Year Plan (2021-25) and take the initiative to further integrate with the Chinese mainland, according to the 2021 governance guideline released by the Macao Special Administrative Region (SAR) on its official website on Monday.

The Macao SAR will work with South China's Guangdong Province to accelerate the construction of their cooperation zone in Hengqin, Zhuhai city in fields including tourism, science and innovation to further promote an increasingly diversified economy in Macao and serve the opening-up of the country, the guideline reads.

It will also continue to promote the high-quality construction of the Guangdong-Hong Kong-Macao Greater Bay Area, the matching of rules and mechanisms of economic operation in the three places, and the efficient flow of goods and talent.

To facilitate the development of infrastructure and people-to-people connections within the Greater Bay Area, new passages and bridges within the Hengqin Port, which connects Macao and the mainland, will be opened at the end of 2021. The Guangdong-Macao New Corridor will also be launched in 2021.

The governance plan also addressed the role of Macao as a bridge to promote tax treaties between China and Portuguese-speaking countries along the routes of the Belt and Road Initiative.

The Macao SAR is expected to build key platforms such as the International Infrastructure Investment and Construction Summit Forum, and to actively participate in the BRI forum, the China International Import Expo among other high-level national and international events.