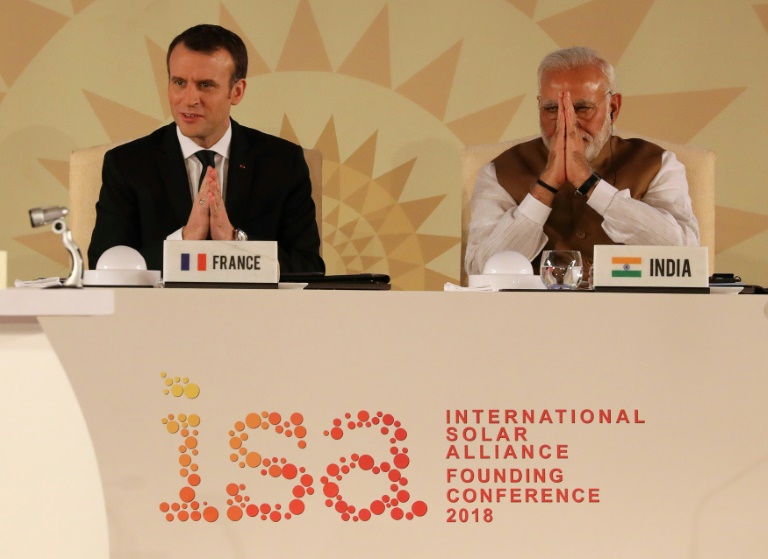 Macron, who in December warned that the global shift to a green energy future was too slow, said France would extend an extra 700 million euros ($861.5 million) through loans and donations by 2022 for solar projects in emerging economies.

France had already committed $300 million euros to the initiative when it co-founded with India a global alliance in 2015 to unlock new cash for solar projects in sunny yet poor nations.

"We need to remove all obstacles and scale up," Macron said at the launch of the International Solar Alliance in New Delhi on Sunday.

Prime Minister Narendra Modi -- who has committed to reducing India's sizeable carbon footprint through a massive scale-up in renewable energy -- said it was vital that nations were not priced out.

"We have to make sure that a better and cost-effective solar technology is available to all," Modi told the gathering of investors and world leaders from about 20 mainly African nations.

"We will have to increase solar in our energy mix."

India, the world's third-largest polluter, is undergoing spectacular growth in its solar sector and is on track to become one of the world's largest clean energy markets.

It pledged at the Paris climate summit in 2015 to source at least 40 percent of its energy from renewables by 2030, mainly via solar.

The energy-hungry giant of 1.25 billion people is banking on solar to electrify homes for hundreds of millions of its poorest citizens without adding to its considerable emissions output.

Macron and Modi hope the alliance will spur $1 trillion in new solar spending by 2030 in 121 countries lacking investment in the sector.

These countries have "the paradox of being the sunniest in the world while enjoying the least solar energy," said Segolene Royal, a former French minister in India as a special envoy for the alliance.

Macron told world leaders in Paris in December that "we are losing the battle" against climate change and urged faster action to combat global warming.

Energy and investment has been a focus of Macron's three-day visit to India.

He and Modi will open a new 100-megawatt solar plant near the holy city of Varanasi on Monday built by the French company Engie.

But the two leaders have also struck a key defence accord for the Indian Ocean. Under the deal, India and France will open their naval bases to each other's warships, a move seen as an attempt to undermine China's territorial ambitions.

Modi, who welcomed Macron with a bear hug on his arrival Friday, said the accord was crucial as the Indian Ocean region would play a "very significant role" in the days to come.

France's 40-year-old president and his wife Brigitte on Sunday also visited the Taj Mahal, a few hours drive from the Indian capital.

Marvelling at the monument to love is a near-mandatory stop for visiting leaders, with Canada's Justin Trudeau and Israel's Benjamin Netanyahu also touring the Mughal-era marble wonder during tours of India this year.