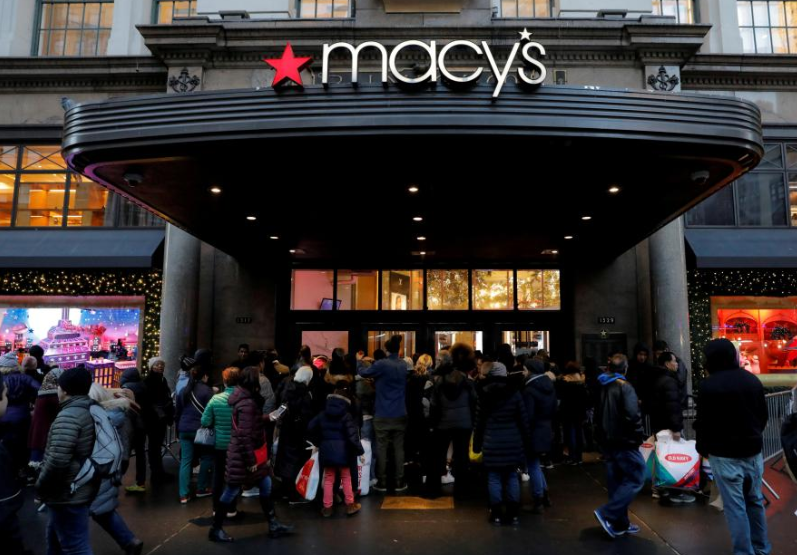 People gather at the Broadway entrance of Macy's Herald Square store ahead of early opening for the Black Friday sales in Manhattan, New York, US November 23, 2017（Photo: Reuters)

“Tax cuts, bonuses and good tax refunds have all been a windfall to consumers who have responded by increasing spending,” said Neil Saunders, managing director of GlobalData Retail. “This rising tide has floated most retail boats, Macy’s among them.”

Like its peers, the Cincinnati, Ohio-based department store chain faltered in the past few years as it struggled to adjust to a fiercely competitive retail landscape where shoppers buy more goods online. Macy’s closed more than 100 stores since 2015 and cut thousands of jobs as mall traffic plummeted and customers defected to off-price and fast-fashion sellers.

Macy’s also said it would end a joint venture agreement with Fung Retailing Ltd in China but would remain active on Alibaba’s e-commerce platform TMall as well as social media channels.

Chief Executive Officer Jeff Gennette said on an earnings call the company saw double-digit growth in its digital business and continued healthy consumer spending. It also had significant improvements in international tourism, which was up 10 percent - its best numbers since 2014.

“We have the digital growth obviously percolating and we are driving that very successfully,” Gennette said. “Brick-and-mortar needed a lot of work.”

Macy’s changed its loyalty program by opening it up to more shoppers and by offering free shipping and discounts to its highest-spending customers.

Executives told investors the changes were paying off as planed, drawing more shoppers online and in stores and boosting sales overall.

The company said it has focused on selling a more curated assortment of trendier clothes.

Shares of rival department stores also rose. J.C. Penney was up 2.5 percent, Kohl’s rose 2 percent, Nordstrom, which reports its first-quarter earnings on Thursday, was up 1.5 percent and Target Corp was up 3.5 percent at around midday.

For fiscal year 2018, Macy’s intends to open approximately 100 Backstage stores, 18 of which the company opened in the first quarter, make it easier for shoppers to check out quickly using their mobile devices by improving its checkout technology and aims to maintain a healthy inventory position.

The quarter also benefited from a change in accounting that shifted its Friends & Family promotional program from the second quarter to the first, the company said.

It also forecast full-year comparable sales at its owned plus licensed stores to rise between 1 percent and 2 percent. Analysts on average were expecting 0.3 percent growth, according to Thomson Reuters I/B/E/S.

Net income attributable to Macy’s shareholders nearly doubled to $139 million, or 45 cents per share, in the first quarter ended May 5. Excluding one-time items, it earned 48 cents per share.

Analysts on average were expecting earnings of 37 cents per share and revenue of $5.36 billion.

“The quarter was good every month - in fact, every week,” Chief Financial Officer Karen Hoguet said on a call with analysts. “Spirits are up.”