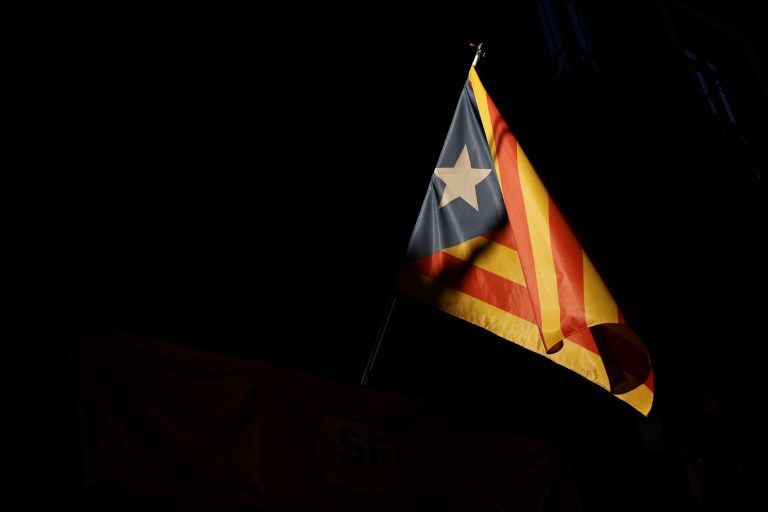 Victory for Catalan separatists in a snap poll has fuelled fresh uncertainty in Spain, one of the eurozone's biggest economies, but the euro has managed to avoid a sharp sell-off . Photo: AFP

The Spanish stock market tumbled Friday after a victory for Catalan separatists in a snap poll, while London hit an intraday record before retreating.

On the other side of the Atlantic, Wall Street stocks retreated as President Donald Trump signed a long-awaited tax cut into law ahead of the Christmas holiday.

US stocks had risen to repeat records earlier in the month in anticipation of the measure, but began to sag this week as the proposal cleared the final hurdles in Washington.

"It's a case of 'buy the rumor, sell the news,'" said Quincy Krosby, chief market strategist at Prudential Annuities.

Madrid's benchmark IBEX 35 index of top companies ended the session around 1.2 percent lower after the Catalan vote injected new uncertainty into one of Europe's biggest economies.

With turnout at a record high of 82 percent, Thursday's election handed a mandate back to the region's ousted separatist leaders after they campaigned from exile and behind bars.

"It's a frustrating result for shareholders invested in Spain to capture the country's rising economic fortunes. Political disruption looks like it will be an ongoing feature of investing in Spain."

The euro also pulled back against the dollar, but the decline was modest.

The Catalan result is "likely to keep tensions between Madrid and Barcelona elevated but at least for now, not likely seen as leading to an imminent breakup of the euro zone's fourth largest economy," said Omer Esiner, analyst at Commonwealth Foreign Exchange.

Bitcoin plunged about 25 percent at one point to near $12,000 as investors exited the controversial cryptocurrency. But ever volatile, the currency began to push higher later in the day and stood at $14,445 near 2140 GMT.

London's FTSE 100 index zoomed its way to another intra-day record high at 7,614.40 points in low-volume trading, boosted by overnight Wall Street gains and the softer pound.

Trade was choppy with many investors away for extended Christmas and New Year festivities.

"I think the softer pound has played an important role over the last month or so, as has the tax reform-fuelled Santa rally in the US, with a number of FTSE 100 firms having exposure to the economy," Oanda analyst Craig Erlam told AFP.

The Frankfurt, Madrid and Paris stock markets trade as normal on Friday but London faced a half-day session.

All four European bourses will be shut Monday and Tuesday for Christmas and Boxing Day, but re-open on Wednesday.

Wall Street will also be closed for trading Monday, but reopens on Tuesday.