BUSINESS Mainland stocks could embrace turbulence in May

Mainland stocks could embrace turbulence in May 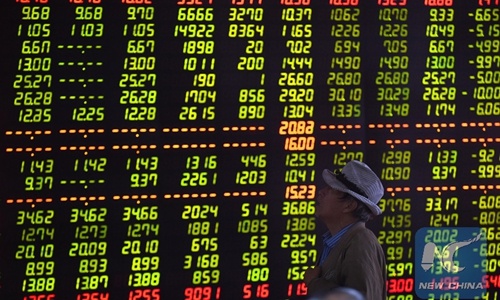 H shares started Monday’s trading session sharply lower with mainland firms listed in the city’s stock market plunging in the morning session, hinting at the start of a turbulent month for mainland stocks when the market reopens Wednesday after an unprecedented five-day May Day holiday.

Hong Kong-listed mainland securities and property firms plummeted shortly after the opening. As of 10:55am, the Hang Seng China Enterprises index, a benchmark that gauges the overall performance of mainland shares in the Hong Kong market, fell 4.11 percent, underperforming a 3.72 percent decline in the Hang Seng Index.

The Monday selloff came after weaker than expected earnings for the first quarter slammed US stocks on Friday. A panic selloff that gripped Middle Eastern markets over the weekend amid a double whammy of the coronavirus pandemic and oil price plunge added to global market woes.

The FTSE China A50 Index Futures, a dollar-denominated futures enabling investors to access the mainland equity market round the clock, also tumbled during the holidays, fueling concerns that an impressive rally that ended the mainland market higher in April might be followed by a harrowing start in May.

The A50 index futures and US stock futures erased some of their losses on Monday morning Beijing time, which could offer some relief to mainland investors.

With the economy’s resumption gaining steam and a slew of technology stocks revealing stellar gains in the first quarter despite the virus onslaught, hopes are still high that mainland stocks can ride out the turmoil, but a lower opening seems inevitably in the making.

Signs of a return to pre-virus hustle and bustle during the May Day holidays reinforces optimism that the Chinese economy is leading a global economic resurgence.

In the first three days of the holidays, nearly 85 million trips were made inside of the country, actualizing tourism revenue of about 35.06 billion yuan ($4.96 billion), per data from the Ministry of Culture and Tourism.

A total of 5 million domestic railway passenger trips were estimated to be made on Sunday, an increase of 50 percent compared with the daily levels in April, official data showed.

In a note sent to the Global Times, Wei Zhen, head of China research at MSCI, said that “what we've been seeing is that in China people start to drive again on the road, and traffic congestion has risen to similar levels as at the end of 2019.”

China has restored roughly 80 percent of its economic activity since the end of 2019, according to Wei, noting that “China is exerting much greater influence in global economy and financial markets.”