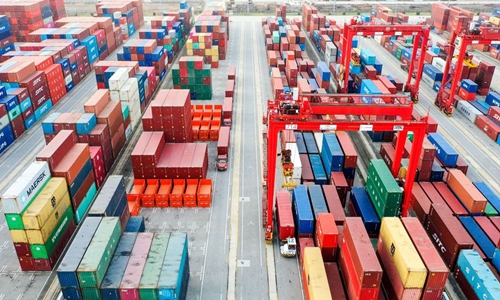 Ningbo, a major Chinese port city where one out of four people work in the foreign trade sector, has seen its export-dependent economy take a big hit from the spread of COVID-19, a senior city official said on Friday.

80 percent of the city's economy is export-oriented, and the virus outbreak has generated multiple difficulties for its export sector, Chen Zhongchao, executive vice mayor of Ningbo, said in an exclusive interview with the Global Times' Editor-in-chief Hu Xijin.

There are more than 20,000 exporting firms in the city, which has trade links with over 220 countries and regions across the globe, according to the vice mayor. The city's trade totaled 917 billion yuan ($131.38 billion) in 2019, the ninth-largest in the country. Its exports were the eighth-largest, accounting for 3.46 percent of the country's total.

The virus onslaught, however, has cast a shadow over the economy of the city in East China's Zhejiang Province, one of the hardest-hit regions in the country.

The virus outbreak has delayed the resumption of production and work, thereby complicating the timely delivery of orders. Also, logistics networks have been hindered and disrupted with a host of countries and regions im-posing border controls. As a consequence, the finished orders face diffi-culty in terms of shipments, the vice mayor revealed.

In addition, the postponement of domestic trade fairs and the inability to at-tend international exhibitions make it impossible for local traders to obtain new orders. On top of that, overseas buyers might refuse to accept the goods, resulting in increased trade risks, he said.

As part of broad-based efforts to help local traders survive during these dif-ficult times, the resumption of work at key trade firms and those with urgent orders will be prioritized under the premise that virus prevention and con-tainment efforts are well in place, according to Chen.

Other than that, there will be ramped-up financial support for local trading businesses, and the local government will help them access special refi-nances from the central government, allowing for them to reopen as soon as possible, he disclosed in the interview, adding that other efforts being considered include restoring the functionality of port logistics, offering stall subsidies to companies unable to attend trade exhibitions, and providing legal assistance to affected businesses to minimize risks.