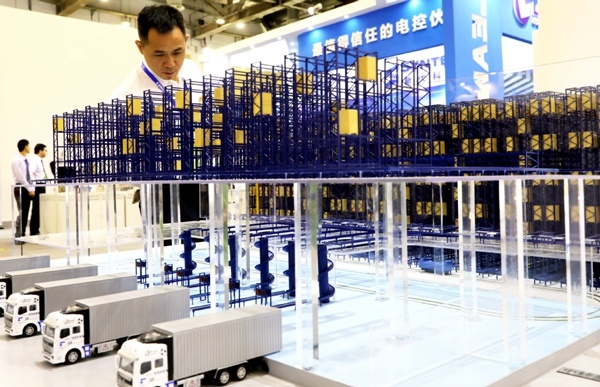 A visitor checks out a smart logistics model during a high-tech exhibition in Suzhou, Jiangsu province. (Photo: Xinhua)

The Chinese economy has again displayed its resilience and capacity for self-healing, experts said after more than 30 major cities released their key economic indicators, with the majority of them registering positive year-on-year gross domestic product growth in the first half of this year.

Xi'an, capital of Shaanxi province, ranked top with 2.8 percent GDP growth year-on-year in the first half. Several other emerging first-tier cities, including Changsha, capital of Hunan province, and Nanjing, capital of Jiangsu province, also saw their GDP increase by 2.2 percent.

High-tech industries and new technologies as well as new forms and models of business flourished. They have become key drivers of economic growth in some cities, especially in emerging first-tier cities, officials and experts said.

Xi'an achieved fast growth in industrial output during the first six months. Its electronic equipment manufacturing industry－which includes computers and communications gear－maintained high growth at a rate of 43.1 percent, according to the Xi'an Development and Reform Commission.

Nanjing also posted double-digit growth in value-added industrial output in the sectors of integrated circuits, new energy vehicles, smart grid and rail transit. The development of the new economy further accelerated, with investment in 5G mobile networks increasing by 110.6 percent, according to the city's statistics bureau.

He advised the government to fully mobilize the enthusiasm of private sector investors and foreign investors to secure sources of funds for these projects through multiple channels.

Tao Jin, a senior research fellow at the Suning Institute of Finance, said some of the emerging first-tier cities gave full play to their advantages in areas such as industrial manufacturing and the internet economy, in order to mitigate the impact of social distancing on the service sector.

Compared with traditional first-tier cities such as Beijing, Shanghai and Guangzhou, Guangdong province, which saw a decline in GDP growth in the first half of this year, some emerging first-tier cities experienced a rapid industrial recovery amid the COVID-19 outbreak, in part because they have benefited in recent years from industrial transfers from eastern China to central and western regions.

However, large cities still take a leading position in terms of the gross domestic product. Shanghai's GDP, which amounted to 1.74 trillion yuan ($249 billion) in the first half, was at the top of the list of Chinese cities by GDP.

"Assuming no significant resurgence of COVID-19 in China and new cases being dealt with in a more targeted manner as in Beijing, we expect domestic consumer demand to improve further in the second half of 2020," said Wang Tao, chief China economist at Swiss bank UBS.

"We expect consumer spending on sports, healthcare, daily use goods, education and telecom services to remain stronger. Meanwhile, infrastructure investment should strengthen further in the second half," Wang said in a report.