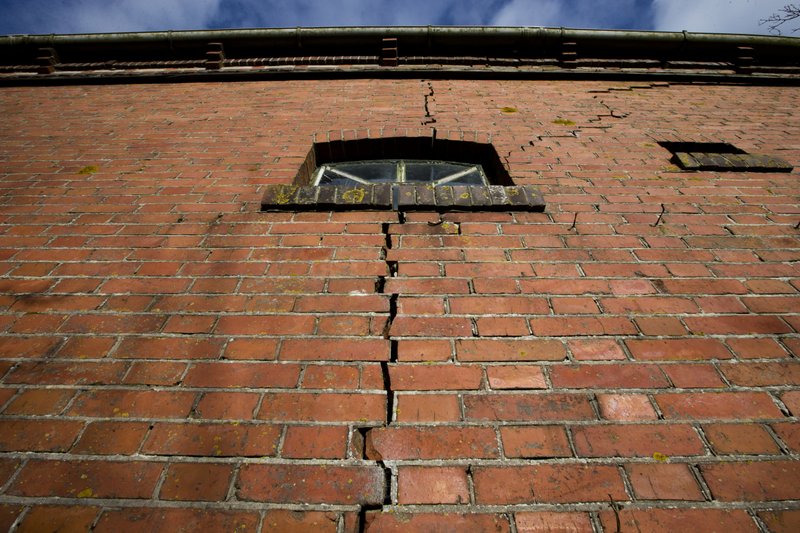 “Nobody listened to him,” she said.

Now, 20 years later, thousands of homes in the northeastern Groningen province are facing reinforcement or even demolition because of hundreds of small tremors caused by decades of gas extraction. The scope of the problem is forcing the Dutch government to confront the prospect of a future without locally produced gas and lucrative gas tax revenue years earlier than previously expected.

Bastiaans and her husband Tom Robinson just had the entire front wall of their home reinforced — paid for by the gas extraction company — and two chimneys replaced because of fears that another tremor could send them crashing through the roof.

The work was completed shortly before a shallow 3.4-magnitude earthquake on Jan. 8 directly under their village jolted the region and rekindled calls for the government to end gas extraction. The quake — the most powerful to hit the region in five years — triggered nearly 3,000 reports of property damage, including a long vertical crack in Zeerijp’s historic church tower.

Thousands marched in Groningen on Jan. 19 to protest the gas extraction-caused earthquakes.

The quakes occur because gas extraction lowers the pressure in a layer of porous sandstone about 3 kilometers (1.9 miles) below the Earth’s surface. This causes layers in the sandstone to be squashed together. If this happens along natural fault lines in the rock, it can cause tension and lead to sudden shifts.

“(The January quake) makes crystal clear the deep impact of the downside of gas extraction on Groningen and Groningers. The damage to their houses, the concerns, the feelings of insecurity, but also the lack clarity about when their damage will be dealt with,” Gerald Schotman, director of the Netherlands Petroleum Company, known by its Dutch acronym NAM, said.

But the government can’t just order NAM to turn off the gas extraction machinery that dots the flat Groningen landscape. Some 90 percent of Dutch homes use the gas and the government has long-term contracts to sell gas to neighboring countries.

“They call our gas extraction ’the Dutch disease,’” said Jorien de Lege of Friends of the Earth. “(Gas) gave us great wealth, because our governments ... got the revenue from all the gas and so our cities have blossomed because of the gas money. And now we’ve gotten sort of lazy, because every time that we want to change something we realize that our whole society is made out of gas.”

Energy giants Shell and Esso — now ExxonMobil — set up NAM in 1947. In 1959, NAM discovered the Groningen gas field, one of the world’s largest, with 2,800 billion cubic meters (98,870 billion cubic feet) of reserves. It has been incredibly lucrative for NAM and the Dutch government. In the 2016 financial year, NAM paid just over 3 billion euros ($3.7 billion) to the Dutch government and made a net profit of 526 million euros ($654 million).

But faced with growing unrest in the earthquake region, the Dutch government has in recent years cut the amount of gas extracted. And after the Zeerijp quake, Economic Affairs Minister Eric Wiebes wrote to Parliament to say “gas production levels have to come down” even more.

Professor Tom Postmes of Groningen University says the effects of the quakes on public health are serious.

He said some 10,000 people have serious health issues caused by the stress.

Hans Warink, whose 25-year-old house in the village of Loppersum has undergone repeated repairs, is one such victim.

“There is so much stress and tension,” he said. “The sadness — it’s no longer the cracks in the walls, it’s the cracks in my soul.”

Just around the corner from Warink’s house is an empty lot where weakened houses have been demolished. An adjoining street is fenced off so workers can chip away the houses’ outer brick wall, strengthen the interior walls and build another exterior wall due to the earthquakes.

On the legal front, an appeals court just upheld a ruling that NAM must compensate residents for the drop in the value of their homes even if the owners do not sell.

Thijs Jurgens, NAM’s manager of the Groningen Earthquakes Organization, said the company believes such compensation should be paid only when a house is sold.

“The court ruled otherwise, and we are going to take a serious look at that,” he said.

NAM has been compensating home sellers in the earthquake zone for housing value drops since 2013.

An earlier court ruling ordered NAM to pay compensation for “immaterial damages” such as psychological suffering but that is under appeal.

Residents believe their concerns are taking a back seat.

“I think we should close the tap,” said Robinson. “But telling that to a multinational is difficult, I think. We’re just a series of villages here in northeast Groningen. I don’t think we’ve got a lot of powerful clout.”

“People aren’t listening to us, haven’t done that for some time,” he said.