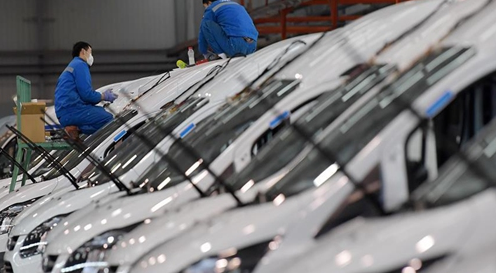 The data highlighted a generally positive trend for the manufacturing sector, which continues to rebound as production restarted and market demand was reviving.

Profits of major industrial enterprises fell 36.7 percent year-on-year to 781 billion yuan ($110 billion) in the first quarter due to the COVID-19 pandemic, with the decline narrowing 1.6 percentage points from the first two months, the National Bureau of Statistics (NBS) said on Monday.

"The narrowing of the decline can be seen as an indication of improvement… that China's economy is recovering not only because of the government's stimulus policies, but also because domestic demand is rebounding after being suppressed by the coronavirus," said Cong Yi, a professor at the Tianjin University of Finance and Economics. But the figures are mixed, with some sectors reporting a quick rebound and even some gains, while other sectors struggle.

Electronics companies, for example, recorded a 19.5 percent rise in profits in March, reversing an 87-percent decline in the first two months, the NBS data showed.

According to Cong, the rebound might have been driven by a business shift from offline to online and the government's push for "new infrastructure" where electronics and related industries play a big role.

Beverage companies' profits rose 7.5 percent on a yearly basis in March, compared with a 21.9-percent decline in January and February.

But some sectors hit hard by the virus were feeling the pain. Vehicle companies' first-quarter profits slumped 80.2 percent year-on-year, widening from a 79.6-percent decline in the first two months.

According to a Reuters report, a senior manager at Mercedes-Benz maker Daimler recently revealed that the company sold about 50,000 vehicles in March in China, and the German carmaker said it is "confident" of China's market performance.

Wang Jun, deputy director of the department of information at the China Center for International Economic Exchanges in Beijing, said that the advantages that China could offer, like a gigantic market, won't disappear as a result of the pandemic, and he is "not pessimistic" about the appeal of China to overseas investors.

Despite the complexities facing China's factory sector, experts unanimously told the Global Times that profitability would improve, despite persistent pressure.

Liu Xuezhi, an expert at the Bank of Communications, said that industrial profits are likely to contract 10 percent year-on-year in the second quarter, which would represent a further rebound in the coming months. The improvement will persist in the third quarter as the economy recovers, he added.

Wang also predicted that manufacturing profit declines will narrow in the second quarter, but gains are unlikely.

"Pressure is still mounting, as the negative influence of slumping foreign demand might weigh on China's manufacturing sector," he told the Global Times.