The U.S. government threatened to ban Chinese firm ByteDance's TikTok video app on Monday under the pretext of maintaining a free and fair market as well as national security concerns, an excuse widely used to discriminate against Chinese companies and investment. 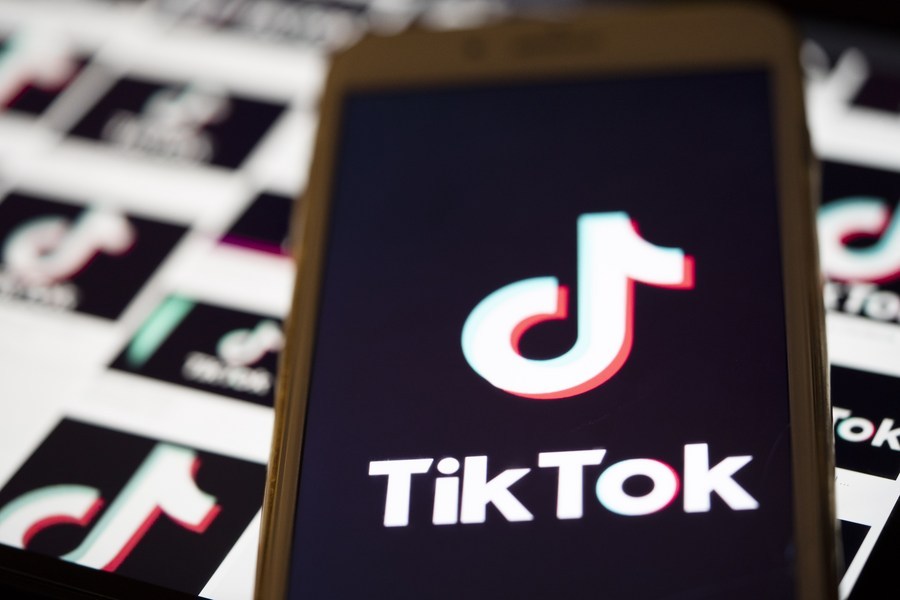 The logo of TikTok is displayed on the screen of a smartphone on a computer screen background in Arlington, Virginia, the United States, Aug. 3, 2020. (Photo: Xinhua)

Speaking to reporters at the White House briefing, U.S. President Donald Trump confirmed that he is open to a deal in which Microsoft Corp. or other U.S. companies buys one of the world's most popular video-sharing apps.

Trump set Sept. 15 as the deadline for TikTok to find a U.S. buyer or face shutdown in the country.

The forced sale reveals Washington's intentions to control the tech economy and runs counter to the principles of a free market. Furthermore, it violates the World Trade Organization's principles of openness, transparency and non-discrimination.

Since 2017, the United States has investigated ByteDance over its acquisition of a social media app Musical.ly, which was fully rebranded as part of TikTok in 2018. Yet the White House has found no evidence indicating violation of any regulations by the Chinese company.

"We have faced all kinds of complex and unimaginable difficulties, including the tense international political environment, collision and conflict of different cultures and plagiarism and smears from competitor Facebook ... We strictly abide by local laws, and will actively use the rights granted by the law to protect the legitimate rights and interests of the company," ByteDance has said in response to Washington's threat.

"Chinese companies have been accused of incredible activities that have nothing to do with their commercial operations ... It appears that Washington is using every opportunity to use non-market and extraterritorial methods and illicit techniques to elbow a strong high-tech rival out of the market," Russian Foreign Ministry spokesperson Maria Zakharova said in the weekly press briefing on July 23.

"The fate of the platform remains uncertain, but one thing is clear: Banning it would upturn fundamental principles of democracy," wrote Nicholas Thompson, editor in chief of Wired, in the article The Rank Hypocrisy of a TikTok Ban on Monday.

"It's a rare feat to upturn two such fundamental democratic values -- free speech and free markets -- at the same time," Thompson said.

"And since TikTok is one of the only recent social media startups to compete with tech giants like Facebook, weakening TikTok could further reinforce what many argue is the monopolistic nature of the U.S. tech economy," said Shirin Ghaffary in a story posted by VOX Saturday.

"This is a purchase that wouldn't be necessary but for the Trump administration's hostility to Chinese ownership of any tech companies," said Mark Lemley, director of Stanford University's program in law, science and technology.

"If a deal goes through (between Microsoft and TikTok), it would mark a dramatic intervention by the U.S. government in private enterprise and alter the global technology landscape," wrote Shelly Banjo and Dina Bass in a Bloomberg report.

"It offers a blueprint for others around the world to think, 'Maybe we don't trust the way that Silicon Valley companies are handling our data, so let's just ban them, too ... If we are increasingly closed out of markets around the world and access to that data because we've helped create a blueprint for how to do it with China, I could see those same tools turned around on us,'" she said.

"There are also reasons to be skeptical of the motives of TikTok's biggest critics," said Kevin Roose, Tech columnist for the New York Times, in a story posted on Monday.

"Many conservative politicians, including Mr. Trump, appear to care more about appearing tough on China than preventing potential harm to TikTok users. And Silicon Valley tech companies like Facebook, whose executives have warned of the dangers of a Chinese tech takeover, would surely like to see regulators kneecap one of their major competitors," he said, stressing that TikTok is not an urgent threat to America's national security.

Washington's TikTok ban has provoked outrage with a hashtag #savetiktok2020 created among about 70 million monthly active users of TikTok in the United States. Videos with the hashtag #ban had more than 620 million views by Sunday night on TikTok. Many of the users have grown to depend on TikTok as a way to build a career in social media and earn a living.

Since September 2018, TikTok usage among adults in the United States has increased exponentially, doubling and reaching 14.3 million in just six months, the third highest number of downloads in the world. As of April, the app has been downloaded more than 2 billion times worldwide on both the Apple App Store and Google Play.

TikTok's U.S. job growth has already nearly tripled this year, going from almost 500 employees on Jan. 1 to just under 1,400.

"We're not planning on going anywhere," said TikTok's U.S. General Manager Vanessa Pappas thanking American users for their "outpouring of support" in a video posted on its official TikTok account after the ban.

"When it comes to safety and security, we're building the safest app because we know it's the right thing to do ... We're here for the long run. Continue to share your voice here and let's stand for TikTok," said Pappas.

For weeks, the Trump administration has repeatedly targeted TikTok citing concerns over the privacy and security of its American users. TikTok has denied the allegations and said it has an American CEO and that its servers reside in the United States.

"TikTok has enabled the kinds of interactions that could never take place on the likes of Facebook and Instagram," a group of nine TikTok creators with a collective 54 million followers wrote in an open letter to Trump on Sunday.

"Our generation has grown up on the internet, but our vision of the internet is going to require more than two gatekeepers. Why not use this as an opportunity to level the playing field?" they said.

A Morning Consult poll released in July showed that 33 percent of U.S. adults opposed the ban, with the strongest opposition coming from adults between 18 and 29 years old.

In a statement published Wednesday, Kevin Mayer, former Disney executive who became the CEO of TikTok in May, said that "we are not political, we do not accept political advertising and have no agenda -- our only objective is to remain a vibrant, dynamic platform for everyone to enjoy."

"Without TikTok, American advertisers would again be left with few choices. Competition would dry up and so too will an outlet for America's creative energy," Mayer said.