Markets are seeing a ‘Biden bull’ 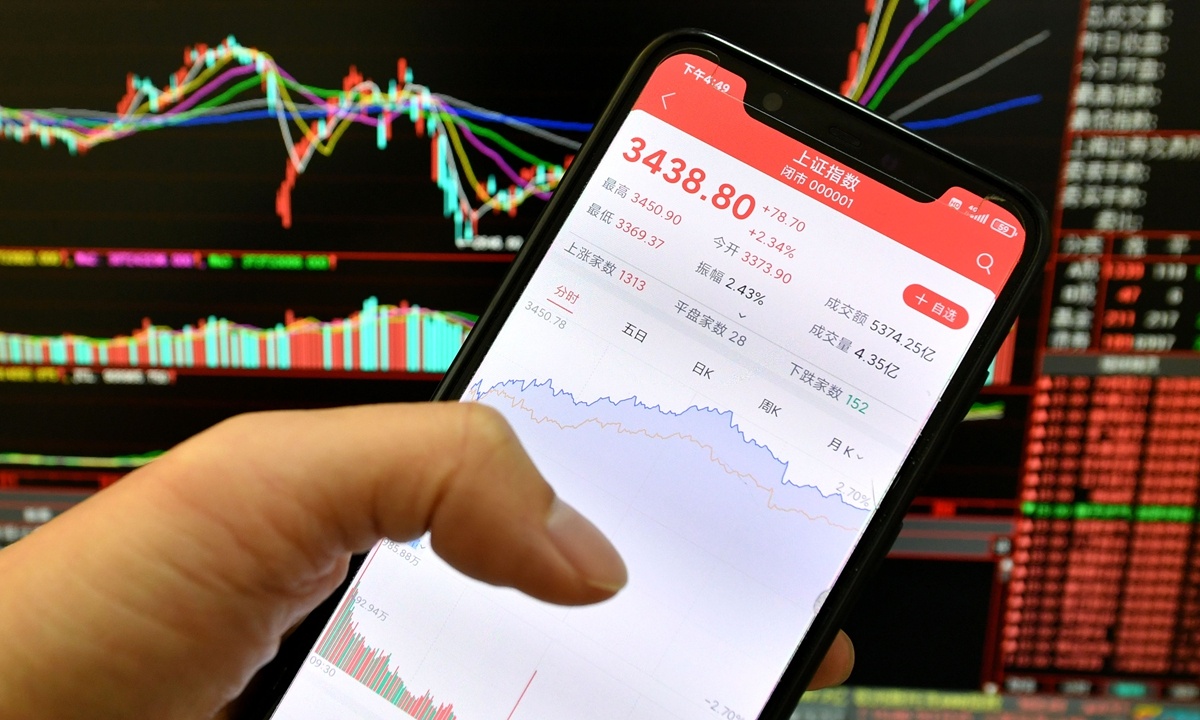 Chinese stocks broke through a key resistance level on Monday as the benchmark Shanghai Composite Index edged up 2.34 percent to close at 3,438.8 points, starting the week on a high note. (Photo: cnsphoto)

A coming Joe Biden US presidency is sending global markets higher and injecting notable optimism into China's equity market, as he is expected to move away from a financial decoupling with China, market observers said.

Market across the world rallied on Biden's election victory on Monday, which many investors have called "Biden Bull".

China's stock markets were buoyed by the victory of Biden as investors saw it as a fresh impetus, Dong Dengxin, director of the Finance and Securities Institute at Wuhan University of Science and Technology, told the Global Times on Monday.

In addition, Dong said China's A-shares were being boosted by the nation's "better-than-expected" foreign trade in October. Statistics released on Saturday showed its exports in US dollar terms soared 11.4 percent year-on-year in the month, the highest growth rate in 19 months.

A rally was also seen in other Asia-Pacific markets.

"Various market performances across the world showed investors' rising expectations for the new Biden administration. People hope he could rectify the country's policies and bring US development back to normal," Dong said.

"That is to say, the US is hopefully to get back on track under Biden's leadership through embracing globalization, safeguarding the global trade order and stabilizing the global supply chains," he noted.

Although the tail risk of market sentiment will stay during the power transition period at the White House, the expected certainty of Biden's policies will stabilize market expectations, according to economists at ICBC International.

"The US COVID-19 prevention and control policy will become stricter and more systemic once Biden is in power, which will ease disorder in the US society amid the spreading pandemic," ICBC International economists Cheng Shi and Wang Yuzhe said in a report sent to the Global Times on Monday.

They added that a moderate fiscal stimulus in the US is expected to be introduced while its loose monetary policy is unlikely to change. As a result, "clarified economic recovery prospects will push up the returns of US Treasury bonds."

According to Biden's consistent position and logic, he may strive to ease tensions with major economies and try to rebuild a global order that was destroyed by Trump's "America First" unilateralism, Cheng and Wang noted.

"We believe that China-US relationship is unlikely to turn for the worse, and there's room for cooperation between China and the US in many aspects," Liu Ligang, chief China economist at Citigroup, told reporters via a conference call on Monday.

Whether there're still risks associated with a financial decoupling would be contingent upon the US' policy stance on Chinese-invested banks in Hong Kong. But at least during the incumbent Trump's presidency, the US has been cautious in applying financial sanctions on Chinese financial institutions, the economist said.

He predicted that the risk of financial decoupling would be lessened under Biden's presidency as the president-elect is an internationalist and cares the US dollar's dominance in global finance and trade.

However, Dong warned what Biden has got from Trump is "a rotten legacy."

"Biden is facing a daunting challenge to correct the errors made by Trump while COVID-19 is still wreaking havoc in the US," he added.

In the long run, Dong predicted that the US presidential election is likely to put a pause on the US stock market's bullish run which will have an impact on global stock markets.

"But Chinese mainland and Hong Kong markets are always the resilient ones, hence, they are highly likely to become a safe haven for global capital," he said.