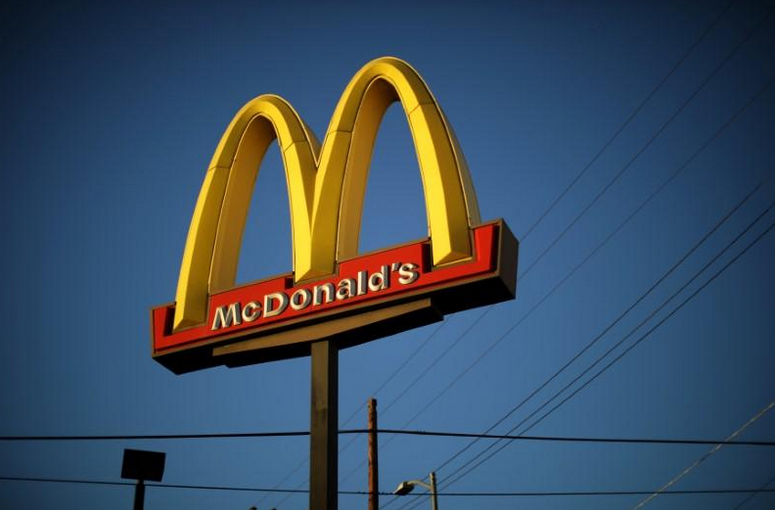 McDonald’s Corp (MCD.N) reported strong restaurant sales on Tuesday, as $1 sodas and build-your-own burgers helped it lure more customers for the third straight quarter and beat back rivals in an intense battle for market share.The world’s largest restaurant chain by revenue has been working to boost flagging traffic at its U.S. restaurants, where it gets most of its profit, after customers defected to fast-food rivals and pricier fast-casual options like Chipotle Mexican Grill Inc (CMG.N).In the past year, McDonald’s has introduced cook-to-order, fresh beef Quarter Pounders, new items with a variety of buns and sauces like the Signature Sriracha sandwich, as well as mobile ordering and delivery.“We served more customers, more often,” Chief Executive Officer Steve Easterbrook said on a conference call to discuss third-quarter earnings. “The U.S. business regained its stride.”
Global sales at restaurants open at least 13 months rose 6 percent for the quarter, beating the 4.5 percent gain expected by analysts polled by research firm Consensus Metrix.
Those sales rose a better-than-expected 4.1 percent in the United States, where traffic improved for the second quarter after more than four straight years of declines. China, the UK and Canada also turned in strong performances.
“Given that the fast food and casual dining segments as a whole struggled over the third quarter, this is an encouraging set of results which suggests McDonald’s is gaining both market and customer share,” GlobalData Retail’s Managing Director Neil Saunders said.
McDonadl’s shares were last up 1.5 percent in midday trading and not far from a record high hit on Friday.
Aggressive promotions in the United States included soft drinks of all sizes for $1, McCafe smoothies and espresso drinks for $2 and the McPick 2 offer of two menu items for $5.
The changes, part of a turnaround plan under Chief Executive Steve Easterbrook, came after Chipotle, Wendy’s Co (WEN.O) and others raised the bar on what consumers can expect from fast food.
McDonald’s shares have climbed 65 percent since Easterbrook was named CEO in March 2015, outperforming a 22 percent rise in the S&P 500 and Chipotle’s 52 percent drop.
Fast-casual chains have fallen far short of expectations after a wave of initial public offerings in recent years. Shares in Zoe’s Kitchen Inc (ZOES.N) and Noodles & Co (NDLS.O) are trading below their IPO prices, while Shake Shack Inc (SHAK.N) is far short of its all-time high of nearly $93 in May 2015.
Lower priced fast-food chains seem to be benefiting from last year’s sharp slowdown in customer traffic to fast-casual chains including Chipotle, which is still trying to recover from a string of food safety incidents in 2015, Bernstein analyst Sara Senatore said in a recent report.
“I think it’s safe to say that the reports of fast food’s death were greatly exaggerated,” said Senatore, who added that McDonald’s and its fast-food peers have posted the best fundamental results and stock returns of the broader industry since late 2015.
Excluding items, McDonald’s earned a profit of $1.76 per share, just missing an average analyst estimate of $1.77 per share, according to Thomson Reuters I/B/E/S.
During the quarter, McDonald’s had higher taxes and expenses, but also had gains from selling its China and Hong Kong businesses.
Total revenue fell 10 percent to $5.75 billion, due to restaurant sales to franchisees and strategic partners. Doing so eliminates the cost of operating those units and replaces restaurant sales with more predictable rent and royalty payments.