BUSINESS McDonald’s sales up globally, despite fewer US customers

McDonald’s sales up globally, despite fewer US customers 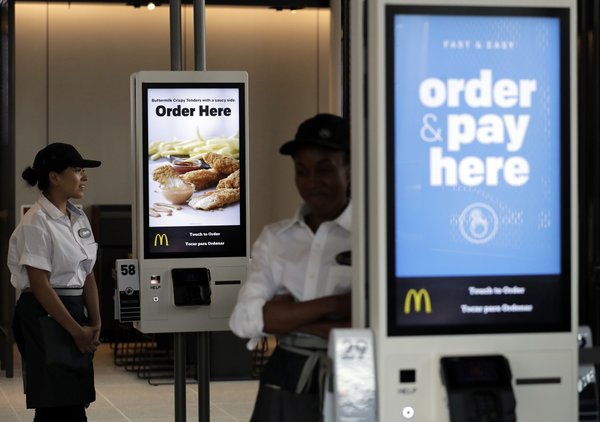 McDonald’s says modernized stores and growth in delivery helped bring in more customers globally last year, but lower store traffic in the US remains a concern.

The world’s biggest hamburger chain said sales rose 4.4 percent at established locations in the fourth quarter and 4.5 percent for the year. McDonald’s President and Chief Executive Steve Easterbrook said the October-December period was the 14th straight quarter that McDonald’s has seen global same-store sales growth. He said 2018 was the second consecutive year that McDonald’s global guest count rose, an achievement not seen since 2012.

Some markets, like the Netherlands and Italy, reported double-digit percentage sales growth in the fourth quarter. But the picture was mixed in the US, which is home to almost 40 percent of McDonald’s 36,000 restaurants.

US same-store sales were up 2.3 percent in the fourth quarter, driven by higher prices. The chain dropped the Happy Meal from its $3 value menu in October, for example, and now charges more for most Happy Meals. It also added pricier limited-time items like glazed chicken tenders. But US customer visits were down in the quarter, partly because McDonald’s is losing share of breakfast orders to competitors like Taco Bell.

Easterbrook said the company hopes to reverse that with breakfast value menus, more coffee promotions and personalized deals for customers using its mobile ordering system. Making sure drive-thru service is meeting demand is also a priority, he said.

One way to ensure repeat customer visits, Easterbrook said, is store improvements. McDonald’s says half its restaurants globally have now been converted to a modern design that includes digital ordering kiosks, table service and curbside pickup for mobile orders. In the US, 4,500 of McDonald’s 14,000 restaurants have been redesigned; 2,000 more are scheduled to be redesigned in 2019.

The redesigns have caused some problems with US franchisees, who have complained about the high cost and the time it takes to complete them. McDonald’s, which is paying 55 percent of the cost for the redesigns, spent $1.4 billion on US renovation costs in 2018 alone, and expects to spend nearly $1 billion this year.

As a result, McDonald’s is allowing franchisees to delay the redesigns until 2022, in exchange for a lower contribution of 40 percent of costs. But the company said Wednesday it expects most US restaurants to complete the renovations by 2020.

“Collectively we remain committed to the growth strategy,” said Easterbrook, who met with franchisees to hear their concerns throughout the quarter.

McDonald’s plans to open 1,200 new restaurants globally in 2019. Nearly half of those will be in China.

Easterbrook said delivery has quickly grown into a $3 billion business for the company. Around half of McDonald’s locations globally now offer it, he said. The US, France and the United Kingdom all saw high double-digit percentage growth in year-over-year delivery orders in 2018, he said.

For the fourth quarter, McDonald’s reported earnings of $1.42 billion, or $1.82 per share. Adjusted for one-time gains and costs, that came to $1.97 per share, which is 7 cents better than industry analysts had expected, according to a poll by Zacks Investment Research.

Fourth-quarter revenue was down 3 percent to $5.16 billion, matching forecasts. Revenue was expected to fall as McDonald’s puts some company-owned stores back in the hands of franchisees. Around 90 percent of the company’s stores globally are run by franchisees; McDonald’s wants to bring that to 95 percent.

McDonald’s shares were flat at $182.68 in early afternoon trading.