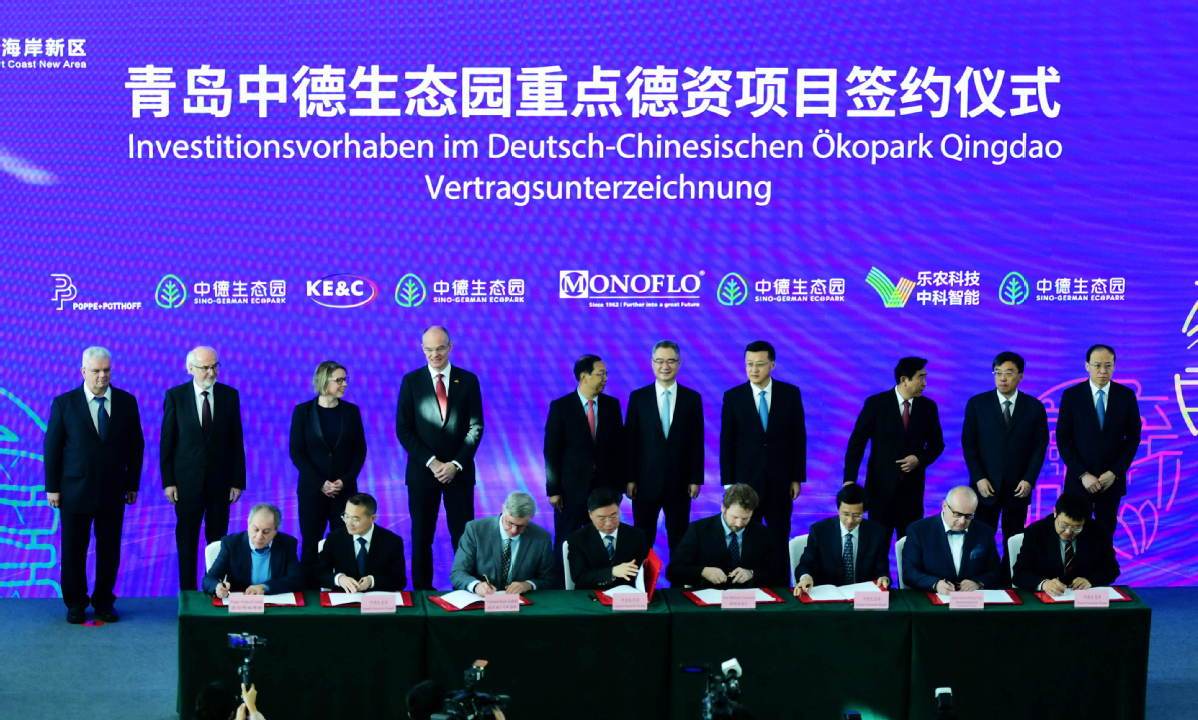 Officials and business representatives witness the signing of deals for 10 Germany-invested projects at the Sino-German Ecopark in Qingdao, Shandong province, on Nov 28, 2019. (Photo: China Daily)

The newly minted law took effect in China on Jan 1 to better protect the interests of foreign investors. With the law, foreign-funded enterprises will be granted access to government procurement markets through fair competition.

Zong Changqing, director-general of the department of foreign investment administration of the Ministry of Commerce, said the ministry will ensure the implementation of the Foreign Investment Law and its regulations, remove unnecessary procedures for foreign investment approval, while striving to create a market-oriented, legal and international business environment.

Last year, the ministry took the lead in organizing the nationwide review of laws and regulations related to foreign investment in order to guarantee the smooth implementation of the Foreign Investment Law.

More than 400 laws and regulations that were inconsistent with the new law were revised or abolished, Zong said at the ministry's year-end meeting.

The Foreign Investment Law bans the use of administrative licensing and penalties to force foreign investors to transfer technology. Foreign companies are entitled to equal participation as their domestically invested peers in the formulation and revision of national, industrial and local standards in accordance with the law.

Zong said the measures China has taken in the past year help strengthen the confidence of foreign investors and effectively ensure that the country can achieve the goal of stabilizing foreign investment.

"It is expected that for the whole year of 2019, China's foreign direct investment will grow by about 5 percent year-on-year," Zong said.

Liu Chunsheng, an associate professor of international trade at the Central University of Finance and Economics, said the Foreign Investment Law, together with its supporting regulations, will further guarantee the legitimate interests of foreign investors and allow them to enjoy the same rights as other entities in the market.

"China has made enhanced efforts to optimize the business environment, which will facilitate market vitality and help with highquality economic growth," Liu said.

He said the law will make it easier for foreign capital gains to be remitted in and out of the country, but there was no need to worry that it would add a burden to the outflow of domestic capital. "Primarily, capital flow hinges on the fundamentals of the Chinese economy," Zhu said in a research note.

Wei Jianguo, vice-chairman of the China Center for International Economic Exchanges, said: "In the future, the country is expected to carry out more measures to optimize trade structures, foster new businesses, build a better trade environment and continuously deepen reform and opening-up."

He said the Foreign Investment Law will bring about several changes. For instance, foreign investment is expected to flow to not only big-ticket projects this year, but to small-and medium-sized ones, Wei said.

While China's eastern areas will continue to attract foreign capital, more foreign investment is expected to flow into central and western regions, which have been revving up efforts to attract talents, the vice-chairman said.

The enactment of the Foreign Investment Law is a clear signal to the world that China is striding toward higher-quality openness, Wei said.

"I am confident that China will be able to attract foreign investment of $140-150 billion next year, ranking first in the world," he added.