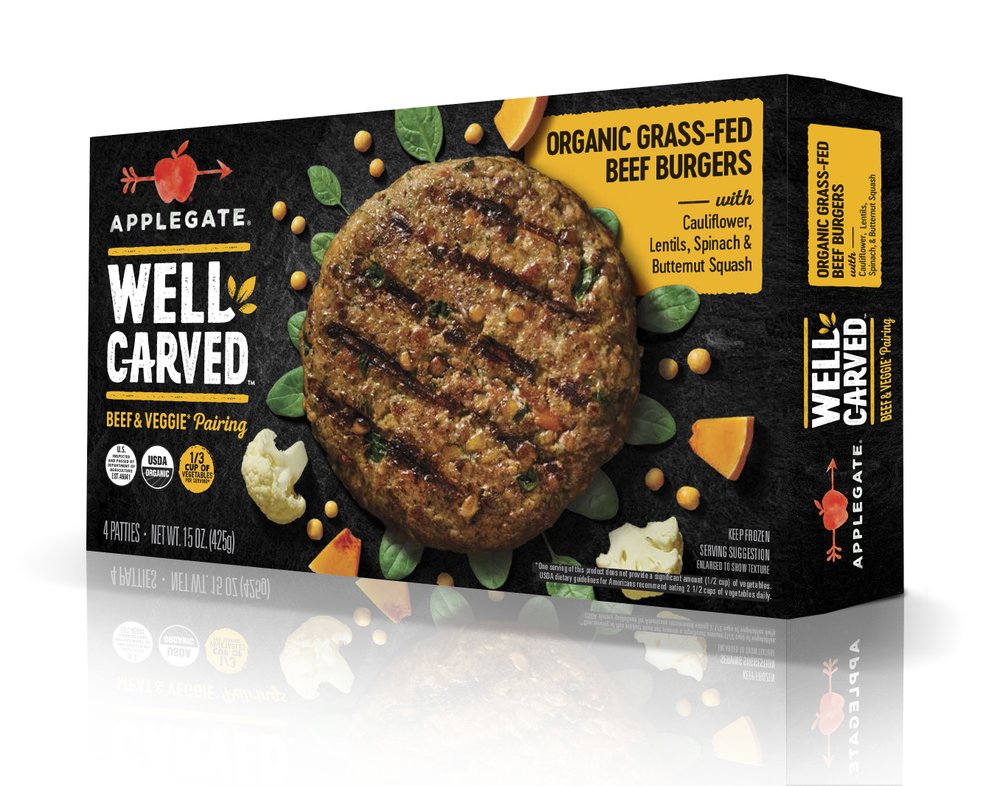 Meat companies are making it easier for you to eat your vegetables by blending them into burgers, meatballs and sausages.

Applegate is introducing a line of meat-and-veggie burgers and meatballs at grocery stores next month. Tyson Foods is already selling a beef and pea protein patty as well as blended sausages. Perdue Farms has chicken-and-vegetable nuggets while the Better Meat Co., a California startup, makes blended ground beef, pork and chicken. More options will arrive this summer for grilling season.

All are hoping to quell consumers’ growing misgivings about meat and its impact on health and the environment. The United Nations called for reduced meat consumption last year, saying agriculture and food production was responsible for 37% of global greenhouse gas emissions. A recent Harvard study suggested that boosting consumption of red meat increases the risk of early death.

Companies like Tyson have already made the leap into pure plant-based products like its Raised and Rooted pea protein-based nuggets that imitate chicken. That competes squarely with startups like Beyond Meat and Impossible Foods, which sell plant-based burgers that closely imitate meat.

But David Ervin, Tyson’s vice president of alternative protein, says its internal research shows only about 17% of consumers have tried plant-based meat, even though 69% would consider eating it. The top barrier to trying plant-based meat is taste, he said. Blended burgers, with the familiar taste of meat, “are an entry point for them to begin to explore that area.”

Connie LaFeve, a semi-retired administrative professional in Washington state, became a vegetarian in 1985 when she joined the Seventh-day Adventist church. Now, she occasionally eats meat and fish, but limits her consumption for health and environmental reasons. She likes turkey and mushroom blended burgers because they’re easy to cook and low in sodium.

“It’s important that we don’t have a fear-based reaction to the change but look at the underlying needs,” he said. “People want changes they can make that are pragmatic and help them move the needle.”

Applegate, a natural and organic meat brand owned by Hormel Foods, is introducing four-ounce beef burgers that mix 72% lean organic beef with one-third cup of vegetables, including cauliflower, lentils, spinach and butternut squash. It’s not as juicy as an all-beef hamburger, but the vegetables give it more flavor. One burger has 200 calories and 15 grams of fat. By comparison, a 73% lean beef burger from Walmart has 340 calories and 30 grams of fat.

Applegate’s turkey burgers have a different mix of vegetables, including sweet potatoes, white beans roasted onion and kale. They’re moister and more flavorful than a typical turkey burger. Ghingo said Applegate worked with chefs on the blends and tries to showcase the vegetables and their texture, not hide them.

“This is not about grinding up the vegetables and plants to imitate meat,” he said.

Dasha Shor, a global food analyst with the market research company Mintel, said meat companies need to have a mix of products in their portfolio as the market evolves, including plant-based meats and cultured meats, which are grown from cells.

“Over the next few years or a decade, you’re going to see a less-but-better approach to eating animal proteins,” she said. “Consumers will not stop eating meat, but might eat less but of higher quality.”

For now, though, she says there is one big stumbling block: price. Applegate charges $9.99 for four Well Carved burgers. Aldi charges $5.29 for the same amount of organic beef. Non-organic ground beef is even less expensive.

Ervin said the price will come down over time as more products are introduced.