Under the Healthy China 2030 strategy, a balanced daily diet should include more whole grains, beans, vegetables and other quality proteins for the Chinese population. Fortunately, plant-based proteins meet the requirements of the national initiative, and industry players at home and abroad are taking proactive measures to explore the emerging market. 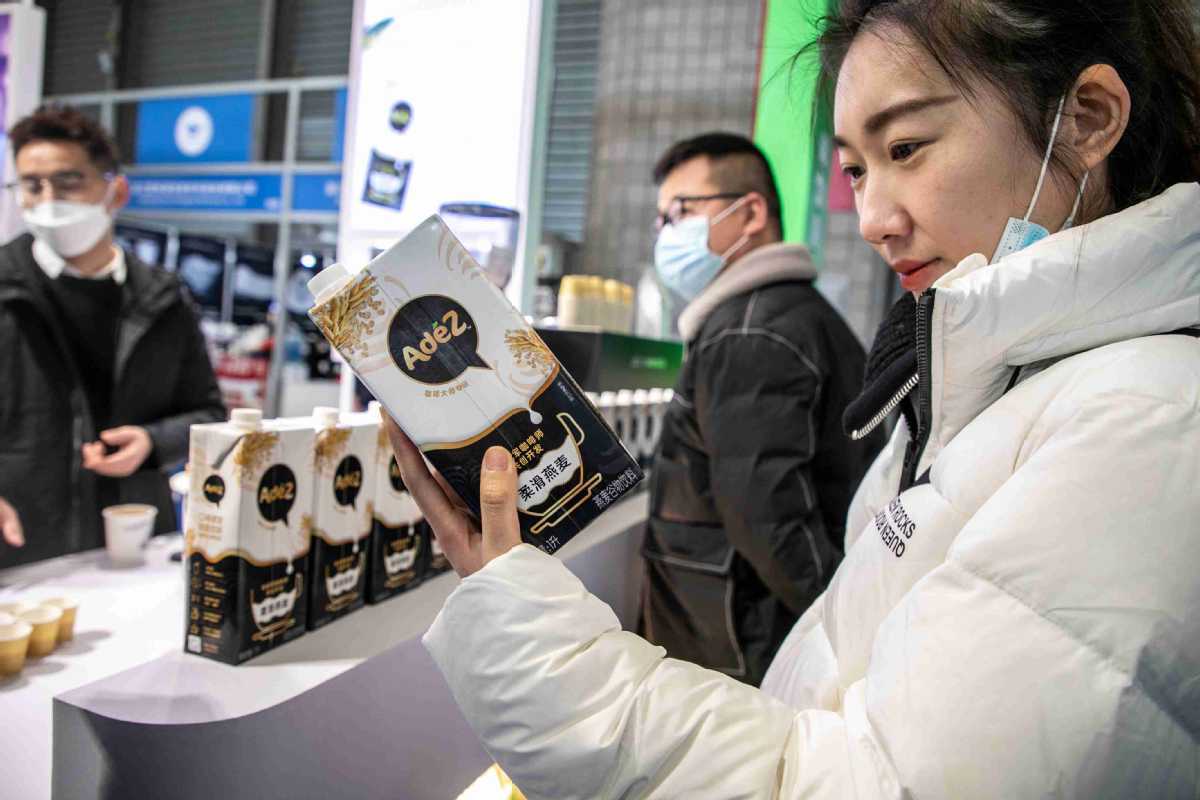 A visitor checks out a plant-based beverage at 2020CAFEEX. [Photo provided to China Daily]

"We believe people will appreciate more choices of quality protein for their balanced diets as we continue to customize protein solutions for our Chinese consumers," said Jackson Chan, managing director of Cargill Protein China.

Given Chinese consumers' increasing awareness of healthy foods, Cargill expects the value of the plant-based protein market will grow to $3.1 billion in China by 2030, Chan said.

Cargill introduced plant-based proteins to the China market in April 2020 with plant-based chicken alternative nuggets and beef alternative patties under the company's own brand.

To better serve the Chinese market, Cargill's plant-based products and solutions are made completely at local facilities－including the innovation center in Shanghai, the plant in Chuzhou, Anhui province, and the company's nationwide partnering serving network.

Likewise, DSM is currently providing technological solutions for alternative proteins, or proteins of the future－PoFu－to explore different kinds of texture and taste possibilities in China with similar combinations of nutritional value as meat, according to Dino Asvaintra, president of DSM Hydrocolloids.

"The whole idea here is to allow us to create something that both in terms of taste and texture seems a lot more like real meat compared to the traditional tofu solutions in China," said Asvaintra.

"Producers will even try to recreate the experience of, for instance, cooking a burger. When you cook a raw burger, you see that it changes color from pink to brown and you see the blood oozing out. They even tried to recreate that part of the experience just so that you feel somehow that it's like real meat, even though it's not meat," he added.

US-based Beyond Meat opened its first end-to-end manufacturing facility in China, which is situated in Jiaxing, Zhejiang province, and the company launched an e-commerce site on JD on July 15.

The company has opened three major product lines in the Chinese market for beef, pork and burgers. It believes there are a whole host of recipes that can allow the cooking of revolutionary plant-based meats to be adaptable to the tastes of Chinese consumers.

A factory with a plant-based protein product output of 60,000 tons by 2022 will begin operations in Shandong province by the end of this year, said Hong Xiaoqi, founder of Shanghai-based Hey Maet.

According to Hong, since the launch of their first product on Tmall in May, the startup company is going to launch a total of five series of products, and projects to reach sales revenue of $7 million this year.

"I believe China can be a big source of innovation for DSM in meat alternatives," said Asvaintra from DSM.

China needs to strike a balance between its large meat consumption and finite resources. In the meantime, the variety of meats used in China ranging from braised pork with soy sauce to meat used in dumplings create incredible opportunities for business players, Asvaintra added.