Jiang Jianguo, vice-minister of the Publicity Department of the Communist Party of China Central Committee, said on Sunday that as the RCEP covers a large size of economy, population and trade, it will help participating countries reduce barriers, forge a more open regional economic environment, increase the level of trade liberalization and the trade volume, as well as improving people's well-being.

He stressed that the media and think tanks can play a vital role in informing the public on government policies related to the RCEP and helping build a consensus among the participating countries and achieve win-win outcomes.

Jiang made the remarks while addressing the opening ceremony of the RCEP Media & Think Tank Forum in Haikou, Hainan province, on Sunday.

Speaking at the event, China Daily publisher and editor-in-chief Zhou Shuchun noted that while the world is facing profound changes rarely seen in a century, as well as the ongoing COVID-19 pandemic, the global economy is recovering amid tremendous challenges.

"It is widely agreed that the RCEP is bringing significant confidence to Asia and the world, and the trend of economic globalization is unstoppable," Zhou said.

"As an important force in promoting human development, news media and think tanks shall further leverage their unique role of enhancing mutual understanding and expanding cooperation. They should take the world forward in the right direction by promoting regional economic development and exchanges and mutual learning among civilizations," he added.

Zhou said he expects the forum to become a regular event for media and think tanks in Hainan, to further improve communication and to lay a more solid foundation for building consensus and expanding cooperation.

The event on Sunday, taking place both online and offline, attracted more than 300 participants from home and abroad. When addressing the opening ceremony via video, former Australian prime minister Kevin Rudd said that he "has always supported free trade, because it is conducive to the people, to economic development and to world peace". 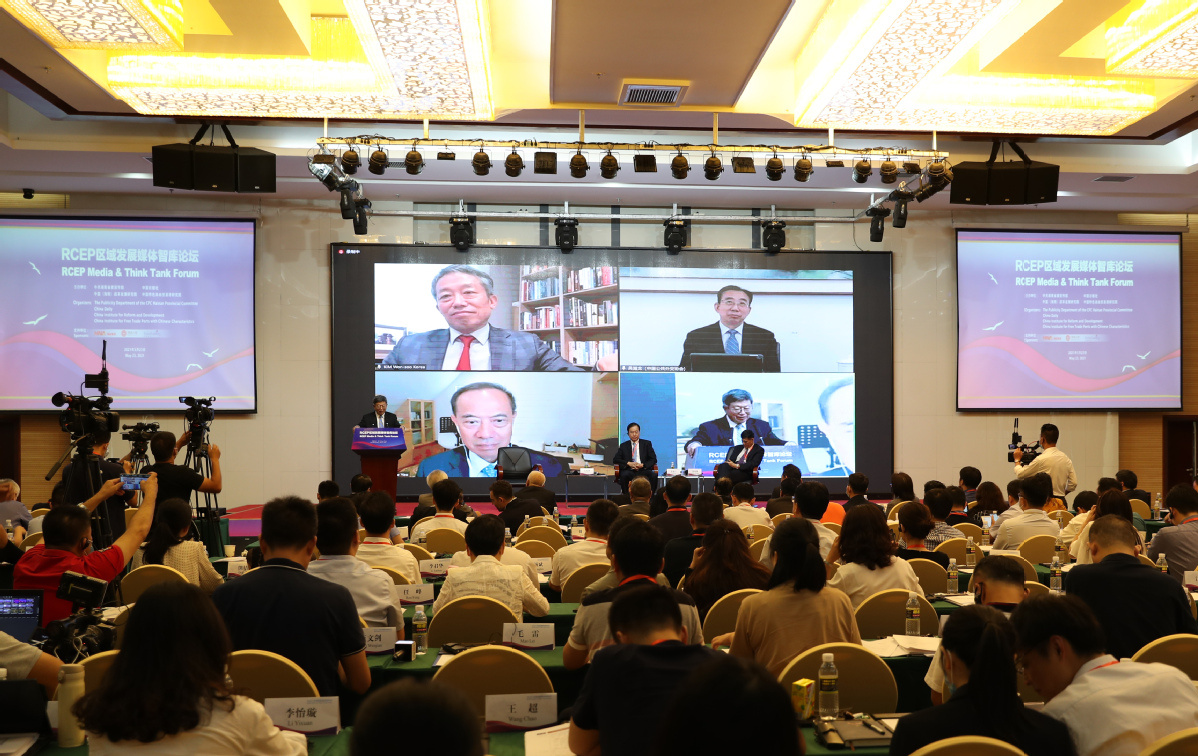 "Free trade has played a significant role in China's economic growth. It has also contributed greatly to the improvement of Chinese people's lives. The economic rise and future growth of Asia will require free trade to play a bigger role," he said in the video.

Arthayudh Srisamoot, ambassador of Thailand to China, said the RCEP will attract more investment from outside the region, especially against the backdrop of COVID-19, and hence help reduce the impact on economies in the region.

"We believe that the RCEP can be an economic recovery tool against COVID-19 that will help to ensure opening of markets as well as uninterrupted supply chains," he said.

Dino Rachmadiana Kusnadi, minister and deputy chief of mission of the Indonesian Embassy to China, said that the purpose of the RCEP is to improve the livelihoods of people and bring prosperity to the region.

Next month will mark the one year anniversary of the Hainan Free Trade Port, which makes the island province better positioned as a platform for an open regional economy.

Also at the event on Sunday, Xiao Yingzi, head of the Publicity Department of the CPC Hainan Provincial Committee, said the province is in full swing developing itself into an export-oriented economy and is playing a positive role in promoting two-way investment in services.

Hainan will improve its business climate and work together with RCEP countries to enhance recognition of rules and standards and to provide consumers with more diversified and affordable goods and services of higher quality, she said.

In November, 15 countries signed the RCEP agreement. China's Ministry of Commerce said in March that the Chinese government has officially ratified the agreement. Other participating countries have either done so or are on their way to completing ratification before the end of this year and pushing for it to become effective on Jan 1, 2022.

Chi Fulin, head of the Hainan-based China Institute for Reform and Development, said that the process of regional trade and investment liberalization and facilitation will be significantly accelerated by the RCEP.

"Measures such as tariff reduction will release the huge trade growth potential in the region. After the RCEP takes effect, more than 90 percent of trade in goods in the region will eventually enjoy zero tariffs. This will greatly reduce trade costs and product prices in the region, and have a huge impact on trade creation," he said.

He said that the pact's unified, open and inclusive market rules will significantly improve the efficiency of trade and investment in the region. In addition, industrial chains, supply chains and value chains will be further developed in an integrative manner.

Zhang Xiaoqiang, executive vice-chairman and CEO of the China Center for International Economic Exchanges, said at the forum that the RCEP is expected to boost the production network of East Asia.

"With significant tariff reduction, participating countries will see their product costs notably reduced, and this will help them build their production layouts within the region in a more flexible way," he said.