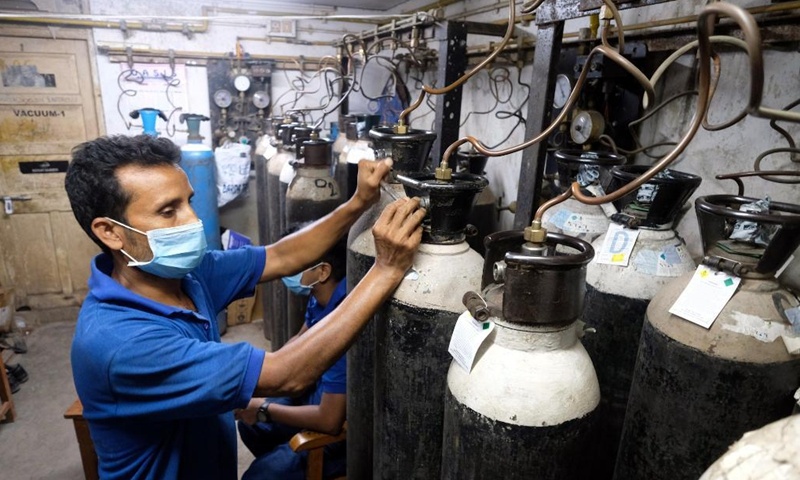 A hospital worker adjusts the oxygen cylinders to supply oxygen through the central pipeline for the patients at a private hospital in Kolkata, India, April 28, 2021. (Photo: Xinhua)

The comments came after India's NDTV reported that a large number of much-needed oxygen concentrators are lying in customs facilities pending clearance amid a deadly second wave of COVID-19 infections in India.

In a photo, many pieces of medical equipment, apparently from China according to their Chinese markings, arrived in a civilian plane.

The news exploded on social media platforms and an Indian court has weighed in on the matter.

Qian Feng, director of the research department at the National Strategy Institute at Tsinghua University, noted that it's true that China's exported oxygen generators are not included on a so-called medical equipment permission list issued by Indian authorities, and oxygen generators may face certain restrictions to be sold or used in India.

"China-made oxygen generators may be investigated by Indian customs and this causes delays," Qian said. "However, the Indian government should ease related restrictions, on account that most of them were purchased by Indian companies from China."

Qian suggested that Indian customs' clinging to clearance protocols concerning imported oxygen generators at a time of great urgency, when people are losing their lives for lack of such equipment, exposed the flaws of India's approach to governance.

"Due to the pressure of public opinion, the Indian government may rectify the process of importing medical equipment," Qian told the Global Times on Thursday, noting that India's manufacturing industry and medical system, which may appear well-functioning, have been easily overrun by the sudden and massive public health crisis.

In the meantime, medical equipment suppliers in China worked full throttle even during the May Day holidays to complete as many orders placed by Indian clients as possible.

Confronting the great demand for oxygen generators in India, China's oxygenator manufacturers had to work overtime during the May Day holiday. Two major oxygen generators, one based in Shenyang of Northeast China's Liaoning Province and the other in Beijing, told Global Times on Thursday that they worked overtime to meet the deadline of orders from India.

Two Shenzhen-based cross-borders logistics agents said that shipments from China to India were postponed recently due to the Indian customs' strict investigation and quarantine requirements.

An executive from a third manufacturer of oxygen generators, which has an annual production capacity of over 10,000 units, told the Global Times on Thursday that no one in the company took a single day off during the holiday to clear the backlog of Indian orders. Even running 24/7, the backlog will take a month to be cleared, the executive said.

Chinese Ambassador to India Sun Weidong told the Global Times in a recent interview that the production of at least 40,000 oxygen generators ordered by India is underway in China.

Since April, China has supplied more than 5,000 ventilators, 21,569 oxygen generators, over 21 million masks and around 3,800 tons of medicine to India, Sun said in a tweet on April 29, citing the statistics of the General Administration of Customs of China.